These are the first five pages of Naomi Azuma’s nigh unpronounceable manga series Suihelibe!: 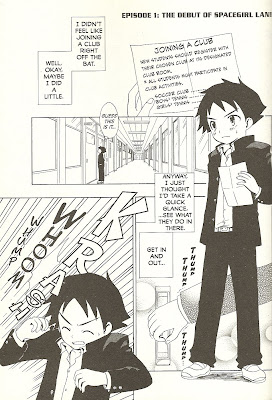 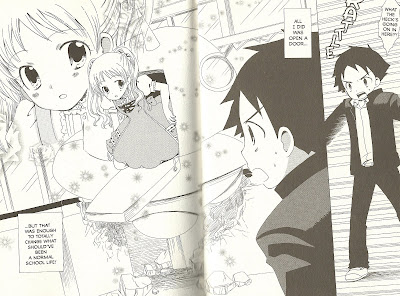 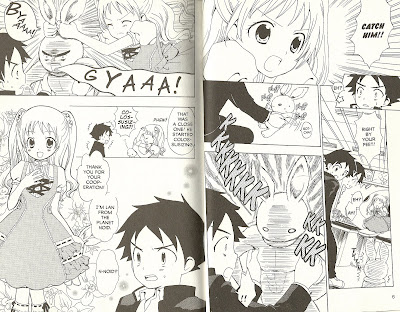 Our young hero Tetsu enters a classroom, thinking he’s about to join the biology club, and instead finds a cute girl in a crashed UFO and a cute little bunny rabbit creature that “colosusizes” into a totally ripped monster until she grabs its ears.

It’s a great opening, consisting of a series of crazy events, about one per panel, jammed right on top of one another, and begging the questions “What the heck is going on?” and “How long is this going to keep up like this?”

The answer to the second question is at least a few more pages, as on the very next one the girl shows him a chart of various alien life forms, explains that she’s on earth collecting animal escapees from her planet, remembers she’s not supposed to tell Earthlings about her existence, asks him to forget everything, hops back in her flying saucer and flies away, tossing a wall-fixing bomb in her wake to restore the classroom wall she had crashed into.

From there, Tetsu continues to attempt to join the biology club, only to learn that a) there is no biology club, as he’s the only student in the school currently interested in it, b) the evil student council wants to shut it down and absorb the funding reserved for it into the other clubs and c) they’ll let him maintain the biology club on the one condition that he find five members to join it.

And then he fights an alligator.

The series is only two volumes long, and not simply because its American publisher CMX went the way of most DC Comics imprints; it’s simply a two-volume series. The pace eventually slackens a bit after the delirious first episode, “The Debut of Spacegirl Lan!!” (with two exclamation points!), but not by too terribly much.

Lan of course joins the biology club, and thus the only biology Tetsu really engages in is that related to finding and capturing escaped Noidy’s, cute aliens from Lan’s world that tend to be more mischievous than dangerous, and all of which can be dispatched with by her blasting them with a “transmitting” ray and sending them back home.

The story line is plotted like a hill, with the whole first volume devoted to building up the cast, with the penultimate panel of the book being a group shot of the five clubmembers and the words “…our adventures are just beginning!” floating over Tetsu’s head, and then, with the second volume, the book immediately starts winding down.

The character conflicts have all been introduced, but the adventures are fairly typical school manga ones —the school fair, a field trip, battling their rival club student council—with the climax being devoted to Lan’s homeworld authorities determining whether she can stay on earth with her friends to capture Noidys or head home.

At just under 400 pages total, it is a rather quick and awfully slight read, and, once the premise is set up, one that’s also fairly predictable and formulaic. Fast and light can also be virtues, of course, and in this particular case, I think they are.

Azuma’s designs are all flat, simple, cute and engaging—the human and alien animal characters alike—and the interplay between naïve and sunny Lan and perpetually flustered Tetsu makes for a decent comedy engine.

Given that as much work seems to have been put into building up the cast as was spent on wrapping up the story, it’s something of a shame that the book only lasts two volumes. On the other hand, Suihelibe! is over before it can even begin to wear out its welcome.

Whatever deficiencies it may have, a reader doesn’t spend enough time with any of them that they ever truly grate.
Posted by Caleb at 5:52 PM