Batman and Robin #14 (DC Comics) I liked the way Frazer Irving drew Robin’s muscles going super-rigid under the effects of Joker venom in this comic. And a panel or two of his Batman leaping and hitting people simultaneously. And, um, well there’s not really much to this comic. The Joker is fighting Dr. Hurt/Dr. Thomas Wayne/Mangrove Pierce/The Devil; the former is using Batman and Robin as his weapons, and the latter is using Professor Pyg, who barely even vogues in a single panel, let alone dances during this appearance. 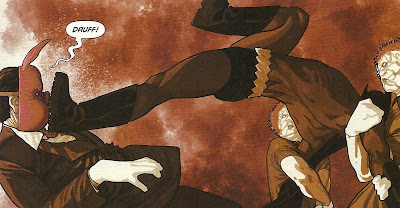 It’s decent enough Bat-comics, but writer Grant Morrison has raised the bar on Bat-comics so much during his run that “decent enough” from him feels like bad.

Brightest Day #9 (DC) I just wrote like four paragraphs about this book and then for some reason Word closed itself and, when I reopened it, the recovered version of the file only had the title of the book on it.

Why is Word criticizing my criticism?

Well to be fair, I didn’t have much to say about this book. I kinda liked it, despite the ridiculous level of gore—c’mon gang, pages 8 and 9 were just silly with gore—and the fact that I couldn’t make out what exactly was happening in the Black Manta vs. The Evil Mera People fight at the end. The artwork by…whoever draws the Aquaman bits of the book wasn’t terrible or anything, but it lacked the clarity of great action comics, so you would see the results of a particular blow or gambit on a character’s part, but you couldn’t see it coming, or understand quite where it came from.

I don’t know. I enjoyed it, but then, Martian Manhunter and Aquaman are like my two best imaginary friends. I have a hard time imagining someone who doesn’t do a fist pump and hiss “Yesss!” to himself whenever he sees Black Manta getting quite so much out of this.

But then, earlier issues of this series were the best-selling comics of August, so maybe the entire direct market loves Brightest Day. Or hates it less than they hate everything else.

Gorilla-Man #3 (Marvel Comics) I suppose writer Jeff Parker’s intent was to take the narrative of this three-issue miniseries from the sort of high-zaniness you’d expect to occur in a book about a talking gorilla in the very first scene and then move into more traditional soldier of fortune action-adventure stuff throughout the rest of the series, as the Gorilla Man tells the story of how he went from being a man man to being a Gorilla Man.

That would make sense, but an unfortunate side effect is that the series’ very best scene was also it’s first one, and as fun as the two-pronged adventure story that followed was, it never again got as action-packed or imaginatively ridiculous as it did at the beginning.

I’m sure glad it’s over, too. I don’t normally buy $3.99 comics, but I made an exception in this case because a) I really like Jeff Parker and b) they were throwing in old Atlas-era gorilla stories as back-ups to help justify the price tag.

So this issue had an extra seven pages reprinting an old Jack Kirby-drawn gorilla story, but I don’t know, it probably wasn’t really worth a buck. If this went on for another issue or two or three, I’m not certain I would have kept up with it.

Green Lantern #57 (DC) Today I particularly missed When Fangirls Attack, as this particular issue of Green Lantern seemed like one that a great many female fans might have a great deal to say about.

The Predator bonds with a creepy stalker guy, who tells the object of his obsession that “I finally have the power-- --make you love me,” but before anything too Meltzery happens, Carol is able to kiss the entity out of the dude, and then she takes it back to her Corps’ home planet where she is made Queen of the Zamorans again.

I actually tried hard not to think too hard about anything that got said or any symbolism in this particular issue, because of the various emotion/colors writer Geoff Johns has been using during his run, the pink/love one just lends itself to unflattering interpretations (Those who were pissed about the cover may or may not be relieved to find out that nothing remotely like it occurs inside the book—only four of the eight characters on it even appear inside—and the first male Star Sapphire is actually more of a Parallax or Ion than a Corpsman/-woman/-thing.

Dough Mahnke’s pencil art continues to amaze, but I notice there’s still four inkers credited. Why does Mahnke still need so many people inking the book? Is he penciling slowly enough that help is needed each and every month?

If so, that’s unfortunate. No page looks bad or anything, but the art is distractingly different from page to page, as the inkers change.


King City #11 (Image Comics) So in this issue, this happens: 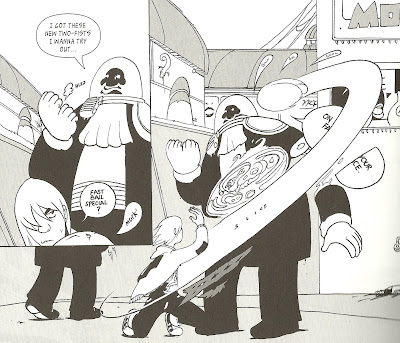 Aw, c'mon, man, not even a mention of the HILARIOUS way Larfleeze closes the Green Lantern issue?? ;)

"But then, earlier issues of this series were the best-selling comics of August, so maybe the entire direct market loves Brightest Day. Or hates it less than they hate everything else."

Isn't anyone else worried that the number one selling comic of August didn't have Wolverine, Batman, Deadpool, or Thor on the cover; but friggin' Deadman? I like Deadman, but that doesn't seem like a good sign...

"Why does Mahnke still need so many people inking the book? Is he penciling slowly enough that help is needed each and every month? "

Dude, wrong direction. Doug Mahnke is one of the best and fastest turnaround artists in comics. He's got so many inkers because someone else is blowing deadlines, so his super-speed pencils get sent to the four winds for whomever can get them done and keep the schedule chugging along.