Batman: The Dark Knight #2 on their The Source blog. This is what it looks like: 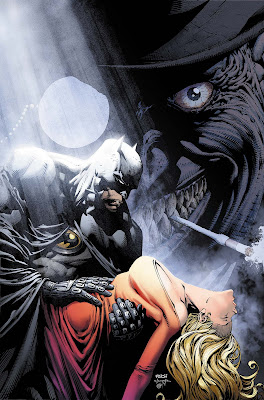 The first thing I noticed, after pondering the question of whether just giving any old character design a monocle and a cigarette holder was enough to make it look like The Penguin, was yet another detail of Batman's new costume, which I still don't like. 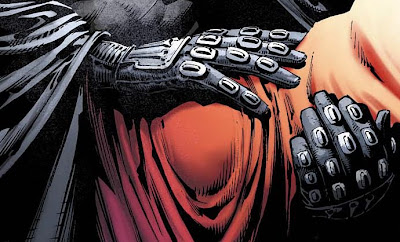 There's something vaguely familiar about them, although I'm not quite sure what they remind me of...

Oh yeah, they remind me of this: 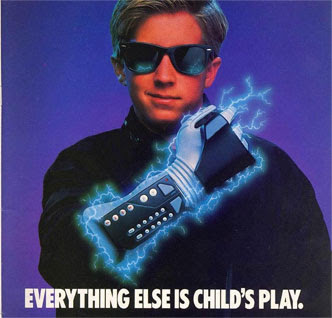 Is Batman rocking two Nintendo Power Gloves as part of his new costume...?

A week or two ago I would have said that was ridiculous, as there's no way Batman has the time to waste playing video games.

But now that I've seen the animated trailer/ad for Batman: The Brave and The Bold: The Video Game, I know that Batman is, in Bat-Mite's assessment, as good at video games as he is at crime fighting. ("I make it a point to prepare for all possible contingencies," Batman says to Bat-Mite, explaining his video game prowess).
Posted by Caleb at 5:22 PM

What's with the woman's o-face? Is THAT what's going on under that cowl?

'like your blog you have here ;)
I've been reading some posts this morning, at work on my spare time!

I generally take the small alterations of Batman's costume in stride. I don't mind a little piping, because it will go away soon enough when they do the next "tweak." I agree, it is stupid, but the whole thing is in flux. This costume though, everytime we see more of it, it looks dumber. I thought that DC was learning from Morrison, figuring out that we want our heroes iconic, not EXXTREME?

I thought it was the scarecrow

Man, that "Penguin" sure is eye-liney. Echh.