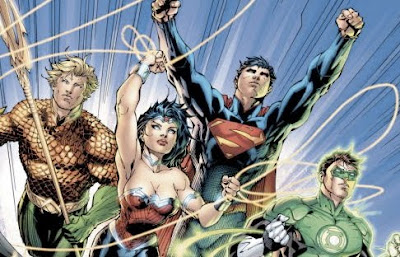 Okay, that's probably not going to be the popular takeaway from DC's announcement in USA Today that they'll be re-booting their entire line—even Action Comics and Detective Comics—in September, with Geoff Johns and Jim Lee on a new Justice League book and most heroes in new, Jim Lee-designed or tweaked costumes.

The first thing I did, of course, was look closely at the image running with the story (above), and noted that everyone has those dumb collars that Aquaman's new, post-Blackest Night costume has. Even Green Lantern Hal Jordan's, which is widely regarded as one of the best superhero costumes ever, and Superman's, which defines superhero costuming. Wonder Woman has a little necklace echoing the effect too.

The closer I looked, the less I like, including Jim Lee's second Wonder Woman costume in as many years, a messed-with S on Superman's shield (!), what looks like a lack of shorts over his tights, and longer sleeves with a weird cut to them. (Superman looks oddly young too, less like the ideal dad and more like someone I would see loitering somewhere).

I hate to be that fan, the one who starts complaining right out of the gate because some things have changed, so I will applaud the audacity of messing around with Superman's costume design—it's less dramatic than the change to Electric Superman, of course, but, in a way, more dramatic because that change was always understood to be temporary, whereas this looks like it's not.

At the same time, there's something off-putting about someone thinking overly seriously about what's wrong with Superman, and deciding that it's the fact that he wears undershorts over his tights. If only he didn't have those shorts, he'd be selling 100,000 books a month again, you know?

It's also rather audacious that it's Lee that was given this gig. As fine an artist he is—and I've really grown to like his 21st century work—and as popular an artist he is, he's not exactly known for his costume-design chops, as the reaction to his Wonder Woman redesign attests.

I think I'll wait to my post on DC's September solicitations to get too deep into any of this, but for now, my immediate reaction is this...

1.) I can't wait to see what creators are doing what books and what the costumes on the various characters will look like

2.) I hope DC thinks better of renumbering TEC and Action, given the historical importance of those titles (the comic they're named after and the comic book that gave birth to the superhero genre, respectively), as I don't think numbering really has all that much to do with either keeping folks away from books or, in the cases of a new #1, driving readers to try something new (Especially keeping in mind that a major portion of comics readers experience these books in collections anyway, where trade dress and volume number are more important than issue number)

3.) I hope this doesn't get too bogged down in continuity, and is neither a hard reboot a la Crisis On Infinite Earths or any sort of soft reboot—the DC Universe has been in a more or less constant state of soft reboot since a few years before Infinite Crisis, with various mistakes being sold as the in-story result of Superboy-Prime punching the walls of continuity. The effect has been that DC has kept the drawbacks of tight continuity, while losing its benefits. Rather than wiping the slate clean here, I hope the focus is on making stories accessible, and writing around continuity conundrums where they arise (Which means knowing the comics that came before. Which is pretty damn easy if you have an Internet connection). (From DC's perspective, a hard reboot bringing about a clean slate can seem appealing, as it's an easy way to get the Batman franchise back to "normal" after Morrison's Batman Inc. plan to sweep way things like JMS's runs on Superman and Wonder Woman, that stupid David Finch Batman book that never shifts, everything they did to Green Arrow and Roy Harper, etc., but it also disincentives readers to read anything published before September 2011, and DC has a gigantic backlog of great comics).

4.) I hope this leads to DC publishing more serial comics I want to read. Right now my regular pull-list of ongoings consists solely of Tiny Titans, The All-New Batman: The Brave and The Bold, Green Lantern, SpongeBob Squarepants and Orc Stain.

UPDATE: I've only read a few reaction posts so far, but it sure sounds like this is such a big move it has the potential to really screw with the direct market in a way that can't be healthy for it. That seems like a bad idea too, but, again, kudos for audacity, I guess. Check out Linkarama at Blog@Newsarama tomorrow for a reaction round-up post.

UPDATE #2: Oh Jesus God. Comics Alliance has the whole piece of art, which also features Batman, The Flash and Cyborg. Here's that half: 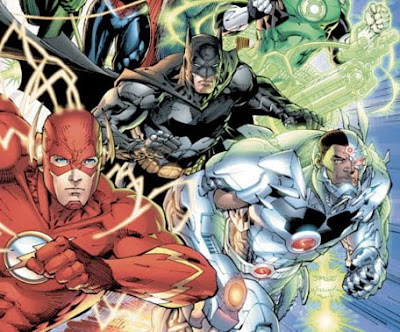 The good news is that it looks like Cyborg is finally joining the Justice League for longer than two issues and that Batman is abandoning his dumb-looking David Finch re-design (Just as I was getting used to it...or at least liking the way Chris Burnahm drew it). The bad news is that the new-new Batman costume looks kinda lame and movie-like/Arkham Asylum video game-like, and Lee even messed with The Flash costume, another one of those perfect superhero costumes that has never really been approved upon (This isn't costume-related, but Lee gives Hal ring-generated guns too...as I've mentioned before, it always depresses me when a hero who can create whatever he can imagine ends up with guns).

Man, these costumes are gonna take a lot of getting used to...
Posted by Caleb at 4:50 PM

I'm pretty ambivalent about the whole thing. The re-numbering of Action and 'Tec strikes me as mind-bogglingly stupid. I have often told people that the comics that will be published as long as serial comics exist will be Action, 'Tec, Fantastic Four and Amazing Spider-Man.

As a minimum, I hope they have the 'real' number somewhere on each issue, a la Spidey at the start of JMS's run.

Further, a much bigger consideration is the $2.99 price point for 20 pages - will it continue? That price point has been successful in getting almost all of my pull-list save for Daredevil, Spidey and Brubaker work to DC.

I must admit the costume re-design doesn't move me too much either way, although, as you say, I defy someone to say that the 'problem' with DC Comics is Superman's costume.

I got the impression from the reports that this is Johns's silver age revival - except now the silver age characters will all be deaged, so that they will now be 'more relevant' for new readers. Think of what that will do to teams like the Titans (shudder). I think it's shameless pandering to young fans and Boomer fans who may be retiring and getting back into comics, while Gen X fans and characters get kicked to the curb.

I'm glad you mentioned that because I really think this is a good thing for creators. Especially those working on lower-tier books that the editors don't interfere with as much.

As far as the costumes... Probably the biggest offense is that they are clearly not better than the classic costumes. I'm sure they'll be gone within a year or so.

One of my main curiosities and concerns is what happens to all the heroes we love that come further down the line, like Tim Drake, Kyle Rayner and Wally West? And as for the costume redesigns, I was worried they'd look vastly different, which they don't and I'm glad for. I dig the subtle changes myself. Everything seems a little more...crisp

There, there... Don`t`cry too much about this. I`m sure that they`ll´keep these cganges only for a few years. Tops. (snif)

This has all the makings of a train wreck. I can't see DC having the capacity to create a whole new 50-title line or keep it on track.

They should have done an 'Earth 1' or Ulitmate JLA and called it a day.

I see a lot of people jumping off.

I agree about not renumbering TEC and AC. I hope they reconsider. Not a fan of the collars, either.

The most messed up ones are easily GL and Flash. It's not on the big picture kinda of way but in the lil' details here and there.

The useless complicated details other artists won't either be able to keep up right or will alter over the time...