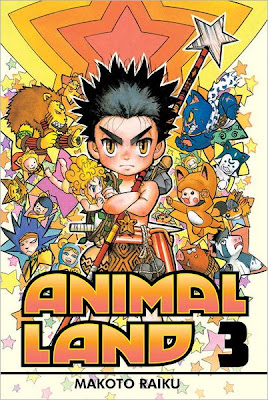 Beneath a bridge in a big city, a woman places a crying baby, tightly swaddled in blankets, into a little basket, and then places it the river. The basket floats away until ZZP ZZAAP sparks flash around an orb of light that's appeared around the basket, and then FSHT, the basket and baby disappear from the river with another little flash.

In another place, another world, the little tanuki Monoko was also recently orphaned, albeit much more violently. Her parents were eaten alive by the pack of wildcats that have been preying on her village. The other tanuki have taken her in, but as kind as her friends are to her, she still lacks a real family. At least until she finds the baby and adopts him as her own, and the first, two-volume story cycle of Makoto Raiku's Animal Land begins. 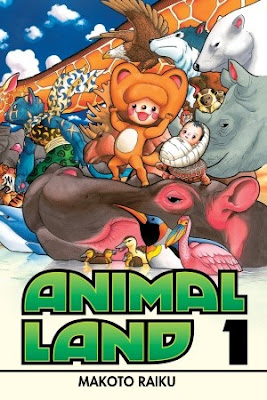 It's a rather strange story in some sense, the image of Monoko on the cover of the first volume, or the appearance of the manga's tanuki offering a good indication of how strange. They don't really look like tanuki, but people wearing tanuki suits, and they're comically designed with buxom breasts, bulging muscles and beards and, in the case of Pepper, the handsome tanuki who Raiku constantly puts in the middle of poop jokes, matinee idol human faces.

That strangeness likely emanates from the fable quality of the story. I'm four volumes into the series, and the setting and how the human protagonist (who doesn't get a name until later on) got there isn't addressed. Perhaps Raiku gets to it eventually, but, in these early volumes anyway, it doesn't at all matter: The animals take the exact shapes and sizes they do, humans have the particular talents and qualities that they do because that's the story Raiku is telling, and it's a remarkably effective one.

The animals of Animal Land generally look like the animals of our land, with the exception of the highly anthropomorhpic tanukis. Most of them go about on all fours and eschew clothing, although some of the animals in Animal Land have highly defined, human-like arm muscles, many can assume upright postures when it's called for, and some of them wear varying levels of clothing (more and more animals wear more and more as the series progresses, I notice).

They are also gigantic. The tanuki seem to be human scaled, based on the boy's size relation to them, but the wildcats are titanic, able to scoop up a tanuki whole in one mouthful. Wolves, pigs, cows, bears and lions are even bigger than that. When an elephant wanders near the tanuki village, it dwarfs the tallest trees, and the tanuki are no bigger than one of its toenails; they wonder if it's a god, it's so big. (Curiously, and somewhat charmingly, age reflects size—the wolf pup Zeke is somewhere between 1/50th and 1/100th the size of his father; when a tribe of lions is introduced in the third volume, they come in three sizes, from tanuki-sized cubs to wildcat and cow sized juveniles to monstrously large proportions).

The animals live by the laws of nature and their own base instincts. The strong survive, and the weak die. Carnivores must eat herbivores or they will starve, and if the herbivores can't find enough plant food to eat, then they will die. No species can communicate with another species, and none cooperate with another—they are all in brutal, constant competition with one another.

At least until the human baby enters the picture. Like the animals, the human is different. He can talk almost immediately and, most remarkably, can talk to all of the animals: Human beings are apparently unique in their ability to understand the cries of different species.

The little boy immediately begins changing Animal Land for what he thinks is the better. He has of all of the animals living in harmony with one another, with none of them needing to kill another in order to survive themselves. It's a mad plan, and one that goes against nature, of course, but, interestingly Raiku doesn't pursue the expected Nature Is Good Until Humanity Screws It Up train of though; rather the direction of these early books is that the human being is effecting positive change in a harsh world, gradually perfecting it. In a sense, it's as if Adam has come back to the garden, and so nature is being restored to its pre-Fall, peaceable kingdom harmony.

The boy isn't alone in his dream—which, it should be noted, does have a selfish component. Because he can hear the cries of all animals, he can hear farway prey species begging for help as predators eat them.

In the first volume he and the tanukis befriend Kurokagi, a fully-clothed, often upright wildcat who has turned against his own kind in order to save the tanukis from them. "Maybe I'm picking a fight with this cruel, worthless world," he suggests, when asked why he's not killing and eating the tanukis, but fighting his own kind, and tells of an experience which made it impossible for him to hunt anymore. "I was waiting for something to change... Something about this world."

Likewise, the boy, the tanuki and Kurokagi spend the majority of the second volume in a pitched battle against a pack of gigantic wolves, and while the boy is unable to convince them not to eat tanuki, the leader of the pack begins to see some wisdom in the boy's view of the world and, on his deathbed, asks him to care for his cub, the last surviving member of the pack.

There is, of course, an intense tension at work here, and Animal Land is hardly a chronicle of the boy's ability to efficiently and effectively tame nature without destroying its inhabitants. The wise old elephant thinks the boy's attempts to marry the various species into a society and his quest to find a plant food that even predators can subsist from is doomed.

The tanuki, Kurokagi and Zeke all eat fish, at which the elephant laughs at the boy's hypocrisy: "Fish have lives as well...The biggest reason you say it is okay to eat fish...is because you still do not understand the voices of fish. I do not even know if fish can speak...but if you do learn...then you will not be able to eat them. You cannot eat those with whom you have become friends."

While the first two volumes chronicle the boy's first years in Animal Land, including learning to stand and take his first steps (an awesome, melodramatic moment that almost resembles a Dragonball Z power-up moment), in the third the narrative jumps ahead seven years. By that point, the boy has developed agriculture and organized various communities of herbivores and omnivores into a huge, interconnected city. 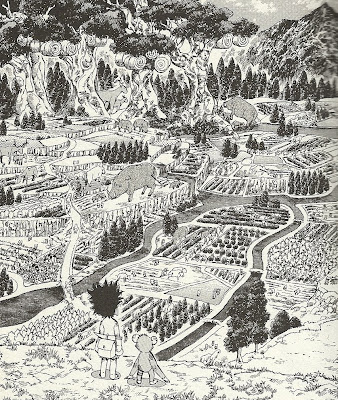 The conflict of these volumes arise when he discovers a second human child in Animal Land, Capri, a female of his species who has been adopted by a pride of lions, and become their princess. The two sides, each with a human translator among them, go to war, and our hero must defend his territory from the lions while trying to teach the lions to reject their own evolutionary imperatives, which, obviously, isn't easy. 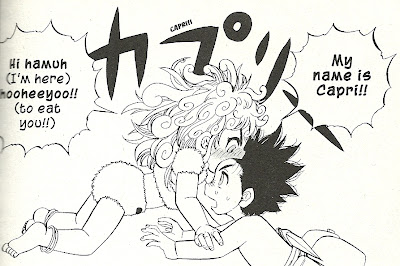 In these volumes, the narrative shifts a bit to a more typical shonen narrative—by the end of the fourth volume, a third human child is introduced, this one an even more wicked one, who has discovered fire—but the central conflict remains present. Animal Land is the story of various idealistic individuals banding together to do the impossible, and change an unjust world into a just one.

It's about as a heroic a struggle as I've ever encountered, in large part because grown-up readers will go into it knowing just how impossible it is. It's not foolish to think you can change the world, the human world, but to change the way of the natural world? To reverse the course of evolution, to teach wolves and lions to live without having to hunt and kill, to erase pain and suffering and death? Impossible. And yet, Makoto Raiku shows us a character giving his all in an attempt to do just that, and that, I think, is what makes Animal Land so compelling. Its hero tries to move an immovable object, and while the rules of the world inside the comic is different than the world outside the comic (they are, of course, whatever rules Raiku might wish to play by), I'll be damned if it still isn't thrilling to watch that immovable object seem to give every once in a while.

Not that the Animal Land is all about struggle, of course. It's a very fun, occasionally quite funny book. In addition to the previously mentioned Pepper poop jokes, the crazy tanuki designs (and those of some of the other little, less realistic animals), and in addition to Raiku's perhaps slanderous portrayal of llama behavior, the fourth volume includes the invention of singing and dancing (built upon the earlier discovery of melodies by a cat that Kurokage met before he moved in with the tanukis), the invention of wine and, not coincidentally, the invention of the concept of the festival.

Which leads to about 15 pages of choreographed dance numbers by the various species who live together. 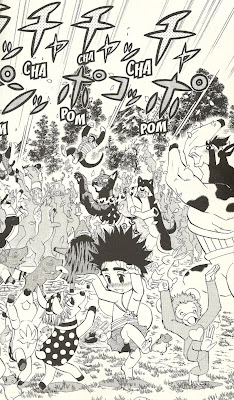 I really like Animal Land.
Posted by Caleb at 7:22 PM