All's quite on the Marvelous frontier. Or it will be, come March of next year. I didn't see a whole lot of great interest in the publisher's plans for March 2013. Even their big initiative of the spring, "Age of Ultron," doesn't sound like that big of a deal—Age of Apocalyse, but with robots, right?—although Ia m really intrigued by their goofy numbering scheme for tie-ins.

FANTASTIC FOUR #5AU
Matt Fraction (W) • TBD (A)
Cover by MARK BAGLEY
An AGE OF ULTRON tie-in!
Will the rise of the artificial intelligence Ultron cause the premature end of the Fantastic Four’s sojourn across time and space?
32 PGS./Rated T …$3.99

And hey, look—they haven't determined who will be drawing that issue of Fantastic Four yet! Great! Well, whoever ends up drawing it, they've only got three months to do it and hand it in for inking, coloring, AR-app applying, so they better determine the pencil artist pretty fast.

For complete solicits, check out Comic Book Resources or ComicsAlliance. 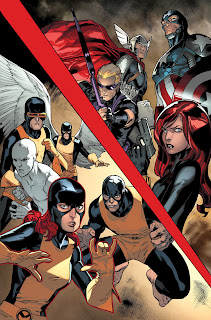 "Guest-starring the Avengers"...? I thought Bendis was going to quit writing Avengers comics. What gives? Doesn't he know the best way to quit is to just go cold turkey...? 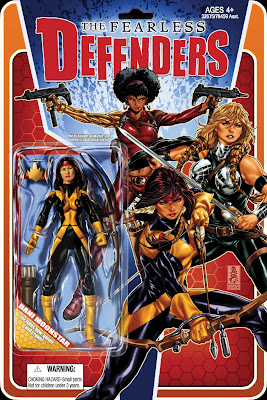 I still don't understand the title of the book, or what it might have to do with these particular characters (This is like the third or fourth attempt at a Misty Knight-led team book in the last few years, isn't it?), but damn, that's an awesome cover. They should do an Everyone's An Old School G.I. Joe Variant cover month. 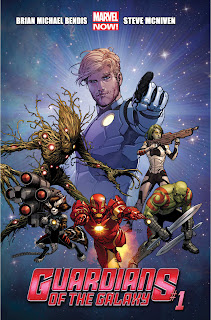 GUARDIANS OF THE GALAXY #1
BRIAN MICHAEL BENDIS (W)
STEVE MCNIVEN (A/C)
...
There’s a new rule in the galaxy: No one touches Earth! No one!! Why has Earth become the most important planet in the Galaxy? That’s what the Guardians of the Galaxy are going to find out!! Join the brightest stars in the Marvel universe: Star Lord, Gamora, Drax, Rocket Raccoon, Groot and--wait for it--Iron-Man, as they embark upon one of the most explosive and eye-opening chapters of Marvel NOW! These galactic Avengers are going to discover secrets that will rattle Marvel readers for years to come! Why wait for the movie? It all starts here!
32 PGS./Rated T+ …$3.99

Marvel's attempt to let Bendis in on some of that Marvel movie money—Avengers Assemble—didn't really seem to take, and sales plummeted so far and so fast that they let someone else write it almost immediately (a lady writer, no less!). But they're letting Bendis try again with this new book, featuring characters re-popularized by Dan Abnett and Andy Lanning, all of whom will soon be starring in Marvel's next major motion picture!

What's of interest here is the announcement that the team will feature Iron Man, or, as the solicitation text refers to him, "Iron-Man" (a new character, perhaps?). I wonder if that means Robert Downey Jr. will be appearing in the Guardians movie...? Which might make sense, as that would tie it closely to The Avengers movie franchise, and Downey is that franchise's most recognizable and salable personality.

I wish they'd hurry up and re-title this book "Hawkguy" already; that's the way Fraction apparently refers to it (on his Twitter account and repeatedly in the letters column for issue #5), and I like the sound of it so much better.


SAVAGE WOLVERINE #3
Frank Cho (W) • Frank Cho (A/C)
Variant Cover by ADI GRANOV
• Shanna and Wolverine are separated, and Shanna teams up with…Amadeus Cho?
• Secrets about the island are revealed, but only bring up more questions.
• And, in this issue, a hero will fall!
32 PGS./Parental Advisory …$3.99

At first I was extremely surprised to see Amadeus Cho, Hercules' sidekick/partner from Greg Pak and Fred Van Lente's run on the character, showing up in a comic called Savage Wolverine and starring Wolvie and Shanna the She-Devil.

Then I noticed the surname of the writer/artist. Are Frank and Amadeus related? Nepotism! 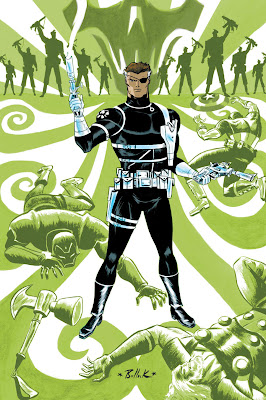 
Dave Bullock is very, very high on the list of artists whom I'd like to see more work from, and on as regular a basis as possible. Look at that beautiful image!

It's a very weird cover though. What's Nick Fury, or a Nick Fury doing on the cover of an Ultimate/Ultimate Comics book...? It was Mark Millar's Ultimate X-Men and then Ultiamtes that introduced the black, Sam Jackson-lookalike Nick Fury in place of the old, standard "616" white guy version. Through weird continuity calisthenics, they introduced a black, Sam Jackson-lookalike Nick Fury into the "real" Marvel Universe (He's the, um, son of the original. Does that work? Sure, that works. Although don't they have to pay Jackson a likeness fee for using his image all the time now...?). So are they simultaneously introducing the Marvel Universe version, or one that looks like him, into the Ultimate Universe...? 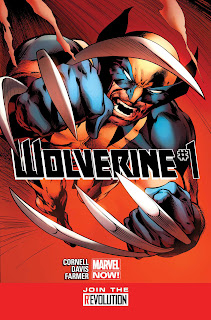 WOLVERINE #1
PAUL CORNELL (W) • ALAN DAVIS (A/C)
...
IT’S HUNTING SEASON!
The best there is at what he does gets an all-new on-going! Pay attention very closely: there’s a mystery here that even Wolverine hasn’t sniffed out yet. When Wolverine finds himself the bargaining chip in a hostage situation, he must make a decision to save a little boy that will follow him forever…literally! How can a berserker fight what he can’t see? And how far will he go to assert his humanity in the face of the Unknown? Find out when superstars Paul Cornell (CAPTAIN BRITAIN AND MI:13, Doctor Who, Action Comics) and Alan Davis (AVENGERS, CLANDESTINE, EXCALIBUR, UNCANNY X-MEN) take on the Wolverine!
32 PGS./Parental Advisory …$3.99

This seems like an unlikely creative team for this particular character and this particular title—British writer best known for quirky if high-quality titles, including a recent run on one of the Distinguished Competition's flagship titles, and a beloved if old-school fan favorite artist.

Cornell and Davis are both the, um, best they are at what they do and that fact, coupled with the fact that neither seem like they would be on just about anyone's top ten list for Guys You Might Hire To Do Wolverine makes them a pretty much perfect choice.

I'll look forward to seeing how this turns out. Eventually.
Posted by Caleb at 10:20 AM