You can tell how far cartoonist Jeff Lemire has come since his Top Shelf-published Essex County graphic novels by the names of the guys he's got offering blurbs on the back cover of The Underwater Welder, an original graphic novel of Lemire's that Top Shelf published this summer. Between Essex County and Underwater Welder, Lemire launched a series at DC's Vertigo imprint, dabbled in some DC Comics and then rode "The New 52" wave to becoming one of the super-publisher's most well-regarded writers, his Animal Man managing to hang onto its inflated audience longer and stronger than many of the other 51 new books DC launched at the same time.

"Jeff Lemire has created a moving, brilliant and fiercely original work about loss, longing and love," writes Scott Snyder, Lemire's fellow Veritgo-turned-DCU writer, the undisputed champion of the "New 52" launch. Snyder goes on for a few more sentences in his blurb, concluding with calling Underwater Welder "A masterpiece of visual storytelling."

The other blurb is from Damon Lindelof, and it's a few sentences pulled from Lindelof's introduction. It starts like this:

Yeah, of course you do. Because read cool graphic novels like the one you're currently holding in your hands. And because The Twilight Zone is undeniably awesome.

Well, ladies and gentleman, you are about to read the most spectacular episode of The Twilight Zone that was never produced.

In comics circles, he's perhaps most famous for taking three years to rewrite Len Wein's Incredible Hulk #181, although he also wrote a short story about Superman's dad for Action Comics #900 and a short Batman story that was illustrated by...Jeff Lemire! (Hey, maybe Lindelof might be slightly biased in his assessment of Lemire's work, then...?)

He's also been involved in the writing of the movies Cowboys and Aliens and Prometheus, but he's best known for the TV show Lost. His introduction to Underwater Welder does not start off strong, with a particularly grabby hook, nor does it wander off on strange tangents for a really long time before reaching a goofy conclusion long after many of those who started it stopped paying attention.

His introduction to Underwater Welder isn't the worst thing he's been involved with, is what I'm saying.

But it's not that great, either. After comparing it to The Twilight Zone and making a joke about Lemire being Canadian, Lindelof then descries three ways in which the graphic novel under discussion is like that particular old TV show: It's strange and creepy, it had deeply flawed and profoundly real characters who often made mistakes and suffered for them and, "finally, and most importantly," there's a broader theme, "a lesson to be learned without being overtly preachy."

There's another joke about Lemire being Canadian and then a groan-inducing concluding paragraph in which Lindelof riffs on the opening of The Twilight Zone, applying details from Lemire's comic: "Picture if you will, a man named Jack. Occupation: Underwater Welder...there is a doorway. And on the other side? Memories, just as dark...and the cold, wet embrace of the Twilight Zone."

So this 200+ original graphic novel that Lemire wrote, drew and lettered over the course of what must have been years of his life? Kinda like a half-hour television show from the early 1960s.

Now, Lindelof does have a point; there are similarities. There are the three "key ingredients" of classic episodes that Underwater Welder shares, which Lindelof describes at some length in the body of his introduction.

Lemire's story does feature some magical realist-like sci-fi aspects, including the title character's lost time, time travel (effected by coming into contact with a pocket watch, of all things) and a temporary detour into a strange, hellish version of his world; the sort of weird shit that might happen in an episode of that old TV show I guess.

Still, it seems like a backhanded compliment at best to reduce Lemire's work down to a comparison with some old TV show, regardless of who well-regarded that particular TV show is. It's not only reductive, but also dismissive and even a bit ignorant; Lindelof sells Underwater Welder incredibly short, and if I weren't already a fan of Lemire's work, I might have stopped reading by the time I finished the introduction, as a 200-page comic that's greatest attribute is that it's like some a TV show my mom watched when she was a kid doesn't exactly sound like a great way to spend one's time. 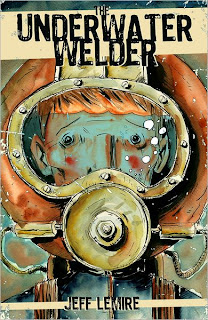 The plot is awfully gimicky; "high concept" with finger quotes around the term. Jack is a relatively young diver who makes his living as an underwater welder on a rig off the shore of his tiny home town. He's about to become a father, although he's not quite ready yet—he's still haunted by the disappearance of his own father, an unreliable alcoholic who used to dive for salvage and, one day, just never came back up.

Lemire slowly teases Jack's backstory out in an organic, leisurely way, through significant moments, pregnant pauses and silent beats, as well as through the dialogue, a great deal of which takes the form of an argument of some kind between the various characters. 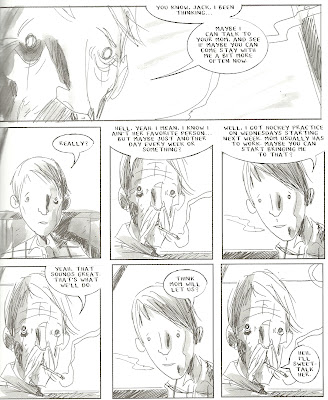 His linework has always been loose, his characters designed with slightly cartoony proportions, their slightly too-big heads riddled with lines that give them all a haggard, tired look. The delicate, looping lines on Jack's father's face, his droopy mustache and eyes retreating into his face, define his pathetic nature just as surely as any line of dialogue he speaks or any disappointing action he takes. 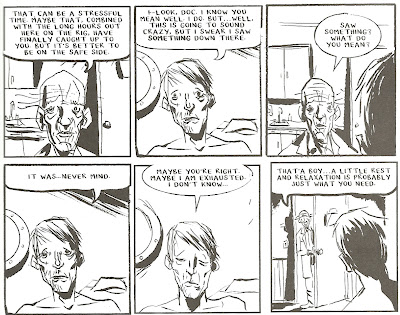 Lemire divides the story into two settings, two worlds. On land, there are few grays, the stark black lines drawn on the bright white of the paper. Underwater, the blacks are thicker and blotchier, and washes of grays fill the pages and panels. Near the climax, when Jack's life is no longer easily divided between above and below the surface aspects, the gray washes encroach more and more, so that the streets and skies seem to take on the water-color gray of the sea.

While much of the conflict is dramatic, the conclusion crosses the line into melodrama, and it's hard to say if it goes too far over that line. A different artist working in a different style might not have been able to sell this story quite so effectively, as it could quite easily slide into saccharine territory, but Lemire's beat-up, run-down looking figures and settings give it a genuine look, a sense of credibility that defies the incredible elements of the plot and the manipulative aspects of the story. 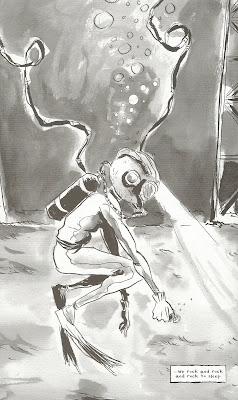 You know: Television.
Posted by Caleb at 7:42 PM

Comparing a story to The Twilight Zone seems like a compliment to me.

Yeah, not really sure what the big deal is here. The Twilight Zone is indeed awesome, and given that comics and TV are both visual mediums it seems like a hell of a nice thing to be compared to.