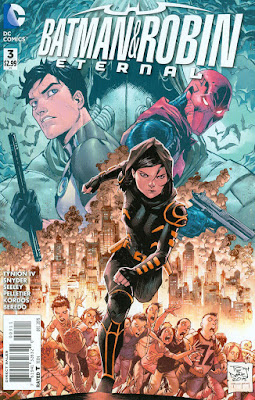 Anyway, in this issue, script-writer Tim Seeley ruins all of that, with a text slug in the very first panel identifying the bar as "Noonan's Sleazy Bar," and, in the second panel, artist Paul Pelletier draws a framed picture of Noonan's regulars Six-Pack and The Grappler in it. 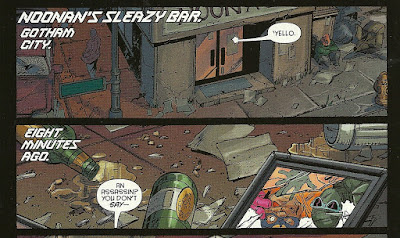 I don't like that. Hitman/Section Eight just plain don't seem like they should have anything to do with the New 52-iverse, and, if Noonan's really does exist in the same Gotham as The Red Hood and Red Robin and company, then it really should only be in comics written by Garth Ennis and drawn by John McCrea.

So, in this issue: The Red Hood, wearing his hood and helmet in a bar, points a gun at Cassandra Cain for no reason, and then she kicks him across the room for no reason, and then he reveals his Batman-shaped gauntlets have giant blades in them, and then they fight until Dick Grayson, Red Robin, The Spoiler and the badly wounded Harper Row all run from Harper's apartment (in The Narrows) to Noonan's, in the space of a few seconds.

Dick takes everyone to the Batcave, puts Spyral on speaker phone, flashes back to the night he and Batman dealt with The Scarecrow a few years ago and then tells the other five characters to stay put while he rushes off to save Bruce Wayne all by himself.

I'd be lying if I said I knew what the hell was going on with Spyral, exactly, or that anything terribly interesting happened in this issue. I like the characters, though, and Seeley writes them well. The art is pretty messy on account of the no-doubt unforgiving schedule (Pelletier draws 17 pages and Scot Eaton draws three, with three inkers finishing their work) and, as I imagine I will complain every month for the rest of the series, everyone's costumes look terrible all the time.

Actually, Harper just wears a bloody tank top and a pair of pants, as she had taken off her dumb Bluebird costume when she was first attacked, which means she is, as of this issue of the story, the best-dressed member of the cast.

Bizarro #5 (DC) Oh man...Bizarro started pretty good, but is now really hitting its stride and firing on all cylinders and...this is the penultimate issue of the series. That doesn't mean writer Heath Corson and artist Gustavo Duarte can't return to Bizarro and Jimmy Olsen again for a second miniseries, of course, but I imagine this road trip through America to find Canada (aka Bizarro America) will find some sort of resolution in the final issue and next month and, well, that's kind of too bad. This has been a pretty great premise, really, one that has allowed for easy access to various guest-stars and locations.

In this issue, the gang infiltrates the secret, military-run alien prison and weapons depot at the behest of a pair of ARGUS agents that look exactly like caricatures of David Duchovny and Gillian Anderson. There they meet members of both Kilowog and Ch'p's respective races and General Samuel "Lois' Dad" Lane, with Lois, CLark and half a page of Rafael Albuquerque all making brief appearances. Also, Bizarro goes to a Vegas casino.

As further, frustrating evidence that this all-around winning series is reaching its end, both Chastity Hex and Colin the Chupacabra bid our heroes farewell and go their separate ways, while Bizarro and Jimmy have a penultimate issue argument which will most certainly be resolved to everyone's satisfaction the next issue.

It's just too bad that the next issue will be, as the next issue box indicates, the "epic first issue" featuring "the boring beginning of the series."

That's almost certainly just Bizarro-speak (I occasionally wonder why this they didn't number this series backwards), but I for one wouldn't mind if the last issue of this series really was the beginning of a series of Bizarro/Jimmy Olsen miniseries by this creative team.

Black Canary #5 (DC) Pia Guerra is still here on art, so this remains a pretty great-looking comic book. Something still feels kinda off about the story to me though, perhaps because of the mix of a radical new take on Black Canary with some leftover baggage from her pre-Black Canary, New 52 continuity. It seems pretty clear that every random-ass occurrence of the previous issues is all connected in one big, weird plot–something Dinah herself notes at one point–and it seems just as clear that it's all coming to a head, likely/hopefully next issue.

This remains a very strange superhero book for me, because the components are generally pretty great–the art, the color, even the scripting of individual scenes–but it's just not all coming together for me in a compelling way, and it's hard to diagnose exactly what's missing.

I can't think of any other comic book I'm currently reading that I want to like as much as Black Canary, but still can't quite get into it.

Doctor Fate #5 (DC) I sincerely wish that all the crazy stuff on this cover actually happened inside the book, but sadly that's not the case; other than fighting some looters who seem more or less equivalent to the guys in the third panel, the still-embryonic main character continues to deal with Bastet, Anubis, the magical flood, his own self-doubt and his family. As in the previous four issues.

Is this what happens when an old-school comic book writer and editor attempts to write for the trade...?

Perhaps. I'm really looking forward to the seventh issue of this series, as I have to assume writer Paul Levitz's plan, at this point, was a six-issue origin story arc, so that the first trade collection will include the new Doctor Fate's entire, over-long origin story. 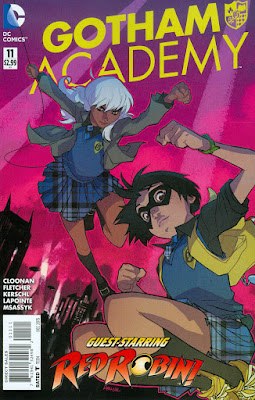 Gotham Academy #11 (DC) The kids take a field trip to downtown Gotham City in order to watch the school's tennis tame take on that of Metropolis Academy (which sounds a little like the title of a spin-off or sister series, really), and Detective Club uses it as an excuse to look for clues into the origins of Olive's presumably late super-villain mother, the flame-creating Calamity.

Maps and Olive go to Gotham City Hall of Records, and just as I was beginning to ask myself why on Earth the tennis match between two prestige, private academic institutions was happening late at night in the worst city in the world, Red Robin Tim Drake shows up, demonstrating that as great an artist as Karl Keschl is, he too is powerless against that terrible, terrible costume.

I mean Tim looks great. He looks like a teenager, he looks a bit older and fitter than the other teens in this issue, and he looks handsome and heroic, but gah, that costume...!

I was a little unconvinced by how blase Tim was when he saw Maps in a mask and throwing a Batarang (the one Damian gave her), immediately taking her to be part of the Robin movement (of We Are Robin). I just sort of assumed Tim and the other "real" Robins would frown on a vigilante movement of untrained, civilian teenagers fighting crime and occasionally dying (spoiler for We Are Robin #3, I guess) in their name, but I guess not...? 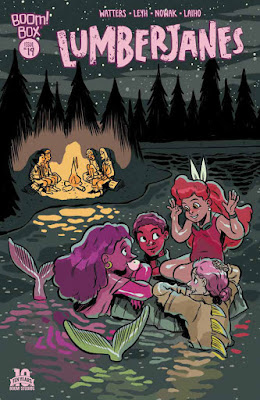 Lumberjanes (Boom Studios) I thought there was one really strong gag in this issue, and that was Mal's rambling disbelief of how things work in the underwater mermaid world, but it otherwise chugged along quite nicely. There are several fun, funny bits, but that was probably the hightlight.

Well, that and April's mention of the Mermaid Lemonade Stand series of juvenile fiction. I kinda want to read those myself now. Maybe Boom will someday do a Lumberjanes spin-off that's a comic book adaptation of those books... 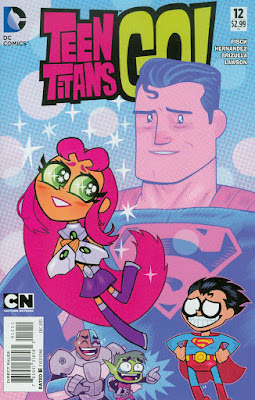 Teen Titans Go! #12 (DC) Sholly Fisch writes both of the stories in this issue, the first drawn by Lea Hernandez and the second by Dario Brizuela. I don't think the comic adaptations generally do justice to the particular charms of the show, as no matter how on-model the artists might be and no matter how "animated" their art might be, the visual/verbal pacing never quite matches the hyperactivity of the show.

That said, the first story is pretty fantastic, and of the sort that even someone who might not be a fan of the cartoon can enjoy, or at least "get." Starfire signs both Raven and herself up for some sort of online dating site, and a steady stream of DC cameos show up to take the girls out. 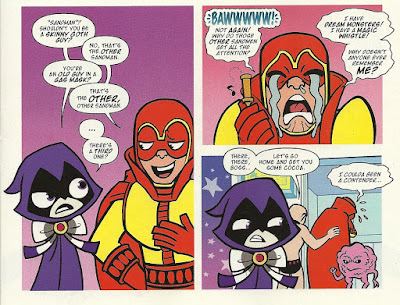 Note that Raven is wearing a big fancy bow, which Starfire apparently affixed upon her during "the primping."

Hernandez gives Star a nice hair-do and dress, too. 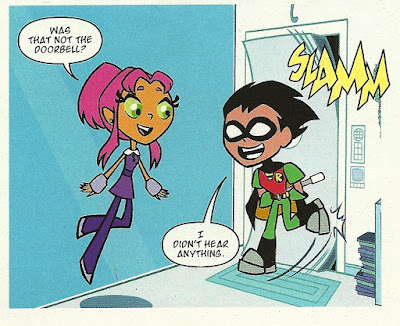 The second half of the book is dominated by "Opposite Day," in which the Titans try to out-opposite one another, but then go too far, opening a portal to an anti-matter universe, and out jump the Anti-Titans (totally different than Nibor's Bizarro Titans, by the way). There's some clever verbal bits in this, and the interactions actually sounded more akin to those on an episode of the TV show, although it seems a little short.
Posted by Caleb at 8:10 PM

I really wanted to like the new Doctor Fate book, but I've dropped it, since it seems incapable of actually advancing the plot. I've known some books to be slow, but this is positively turgid.

Gotham Academy is fun though.

So Harper Row isn't wearing her outfit, but still has that hairdo? Go back to the first issue. Tony Daniel was the first artist to keep changing which side was pink which side was the longer black.

I complain costumes as you do, but I also complain about there being two or three editors on a book and no one pays attention to crap like this. The artists probably know they can get away with it at this point.