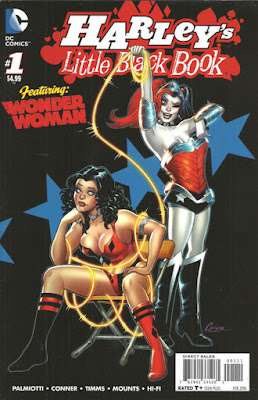 DC's recently launched Harley's Little Black Book is a bi-monthly team-up pairing the writing team of the Harley Quinn monthly with rotating artists, and it's seemingly patterned after old-school team-up books like The Brave and the Bold, which teamed Batman with a different DC character each issue, and DC Comics Presents, which did the same with Superman.

As I mentioned when it was first announced, it doesn't seem like a bad idea for a book at all, really, nor does it seem to threaten "Peak Harley," as the publisher continues to find new ways to cash in on the character's rather sudden and random popularity (her prominent place in the upcoming film Suicide Squad should help sustain that popularity for a few more publishing quarters, too). Considering the many one-shot specials and miniseries that the Harley Quinn writing team of Jimmy Palmiotti and Amanda Conner have been pumping out ever since it became apparent their particular take on the character (Sexy Deadpool) was a popular one, if Little Black Book simply replaces all those other Harley books on the shelves, the actual number of Palmiotti and Conner-written Harley comics pages will remain more-or-less consistent.

This first issue teams Harley with Wonder Woman, complete with a particularly elaborate variant cover scheme involving opaque-polybags to disguise which version of the cover you get (this scheme was stretched out across a chunk of the DC line, actually, to help "celebrate" the release of this book). But let's forget that the comics industry has returned to polybabbing comics (which, incidentally, makes them impossible to flip-through and, at least tacitly, encourages certain readers to either never open them at all, or buy two copies, one to open and one to keep sealed so it will retain it's original "value" of what will almost certainly be "less than the paper it's printed on," if the past is a good indication of what might occur in the future).

Reading the first issue, I was most struck by how it read just like another, extra issue of the parent title. There's no attempt to contextualize the goings-on of the book–which includes Harley at the head of a large, Harley Quinn-themed gang with goofy names, assisted by a re-re-booted version of the old Wonder Woman villain Egg Fu–and, for better or worse, simply squeezes the guest-star into the proceedings.

The plot is that the Gang of Harleys, or "Gang a' Harleys" as Harley refers to them, have stumbled on a London-based supervillain's plot to kill London-based superhero Wonder Woman. The villain is named "Barmy Bugger," and he's "The London Legion of Superheroes' number one villain," according to Harley's Oracle, Egg Fu. As a closet Wonder Woman fan, Harley can't let this happen, but she also wants to be in on the save herself, so as to team up with Wondy. She therefore launches a dumb plan to travel to London and replace Wonder Woman.

Conner draws most of the book, while John Timms draws about 12 pages. Conner's relatively heavy involvement in the art chores should be reason enough for many Harley Quinn fans to pick up the book; the main criticism of Harley Quinn's art has been that, as good as the interiors might be, they're not drawn by Conner, a fan-favorite artist who mostly just provides covers.

Bottom line, if you like the monthly Harley Quinn, you should like this just fine; if you're reading it just for Wonder Woman, though, well, keep in mind it's very much a Harley Quinn comic in which Wonder Woman happens to appear.

There are a few things I wanted to point out: 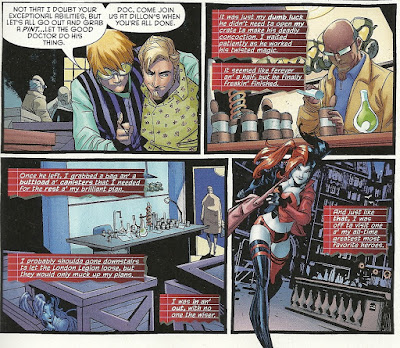 1.) The narration boxes are designed to resemble the ruled or lined paper one might find in a notebook or journal, albeit colored red bleeding into black, with white font. The suggestion is that it's written by Harley herself, then, as she's narrating in first-person (Do note those opaque polybags feature Harley scribbling in a notebook). However, Harley writes in her accent, which is fucking weird. 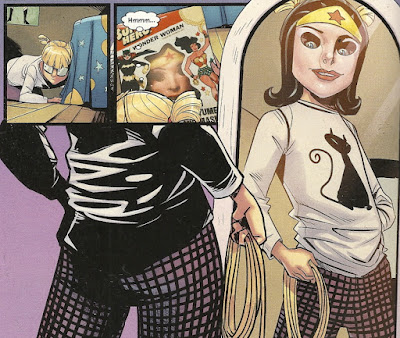 2.) The continuity of this comic doesn't work, like, at all.

Remember that the current DC Universe is about six years old or so, with Justice League #1 being set "five years ago." That was the first comic of The New 52 continuity, and that first story arc featured the first meetings between Superman and Batman, Batman and Green Lantern Hal Jordan, Everyone and Wonder Woman, Everyone and Aquaman, et cetera. The characters were all presumably around for a few months previously (Batman and Superman had time to change costumes from those they wore during the first volume of Action Comics and "Zero Year" respectively, for example, and Hal Jordan met The Flash previously, and so on). If we consider the fact that the "present" of September 2011 is now about a year or two ago (according to the pages of Batman), well, we're looking at a Wonder Woman who has been active in Man's World for, what, seven years, tops?

Now, how old is Harley Quinn, exactly? At least 25, right?

And yet, when she was in grade school "Years and years ago," she was watching TV footage of Wonder Woman (in the pre-New 52 costume that shouldn't exist anymore) and idolizing the Amazon princess/superhero, to the extent that she even dressed up in an old-school, 1970s-era plastic mask and Wonder Woman costume (again, a pre-New 52 version) to beat up some bullies at school, nearly hanging one to death.

This...doesn't work. Even if we allow that Flashback Harley was, I don't know, as old as 11, and even if we allow that Wonder Woman has been a public superhero for as many as seven years, that would make current Harley Quinn only 18, which is pretty impossible, considering she's been active for 5-7 years as Harley Quinn too (and, at some point, had to go to college and grad school and get a doctorate prior to even becoming Harley Quinn).

Yes, I know I am being that guy, but that's just because I am that guy! Please mark this down as Reason #345,627 on your list of Why The New 52 Reboot Was a Bad Idea. The timeline in this story would have worked fine in the pre-Flashpoint DCU, but doesn't work in The New 52 at all. If you think about such things at all. And maybe you need not. While Harley Quinn and this book are both set squarely in-continuity, they do tend to play a bit faster and looser with the "rules" of the shared setting, to the point that sometimes the Harley who appears here seems to be a completely different one than the one who is part of Suicide Squad's ensemble, or appears elsewhere in the DCU. 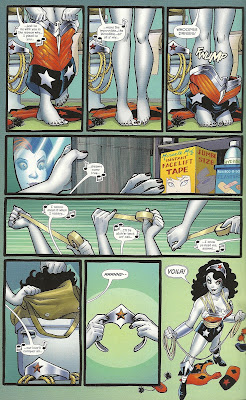 3.) This is at least the second time that Palmiotti and Conner do the Harley Quinn's-boobs-aren't-as-big-as-another-heroine's gag. They previously used it on a cover of the parent title in which Harley tries on guest-star Power Girl's costume, but can't fill it out.

Here she strips Wonder Woman of her costume and puts it on herself, needing to tape it up to keep it on. When Wonder Woman awakens naked in her own bathtub amid a firefight, she's apparently forced to dress in the only clothes available to her: Harley's discarded and way-too-small costume, giving Conner the opportunity to draw Wonder Woman exploding out of that. 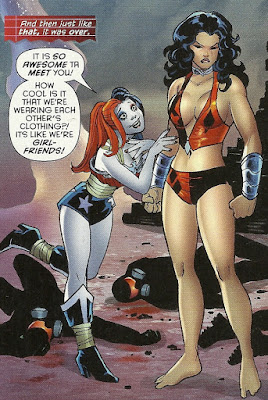 It's a gag they are fond of enough that it's also used as the cover for this issue.

Well, the regular cover (above), not the image on the polybag, or one of the three variant covers that might be inside the polybagged version.

4.) I did really like the Wonder Woman car chase secene, which does not involve Wonder Woman in a car. She's first shown chasing a speeding car down on foot...

...and then later leaps/flies over the car to land in front of it, where she somehow manages to slice it completely in half with her sword... 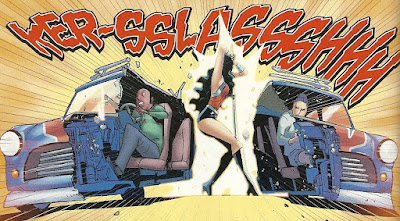 It's a big, stupid scene that doesn't make sense (the car-chopping, not the other parts), but it's also pretty awesome, and, as well all know, in the world of superhero comics, if something is sufficiently awesome, it doesn't have to make sense.

So whatever other weaknesses the book might have–and, again, if you like Harley Quinn, then you'll like Harley's Little Black Book–it at least has that scene going for it.
Posted by Caleb at 7:46 PM

Well, I', pretty sure you missed one or two reasons in there, but I couldn't agree more.

Anyway, and I guess you noticed that as well, I think the device of having Harley writing the narration with her accent is another instance of the ubiquitous contamination of comic book narrative by cinematic technique. Palmiotti clearly intended for it to be "read" not as a diary entry, but as voice-over narration (just like it happens in cinema, where it is recurrent for the voice-over to accompany the act of writing), but I agree it does not make literary sense.

As to the way chase on foot, I found it totally incongruous and I found myself incapable of translating it from comic panel to animated action. There just simply is no way that it comes out naturally (even with the pavement and facades sliced by speed lines, it doesn't look as "credible" as Flash's blur-lines); but I guess one can put that down to personal opinion.

I didn't like the car-slicing (WW clearly stands in the way of the car with her sword almost vertical, allowing the car's kinetic energy to do all the effort) as it reminds me of old 60s/70s action-comedy films like the ones with Louis de Funés or the duo Terence Hill and Bud Spencer (but it goes along with the book's comedic bent).

For the rest (Harley and WW trading costumes), I'm still a fanboy at heart...