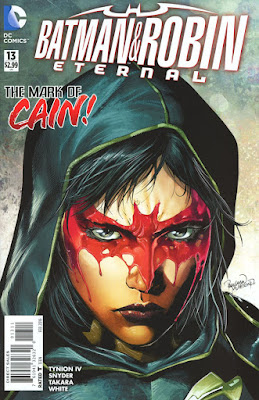 Batman & Robin Eternal #13 (DC Comics) Yes, that's Cassandra Cain with a Bat-symbol drawn like a mask over her face in thick, soup, bright red blood. She actually did a very good job of it, considering she did it with no mirror and in less than a second. It's not the weirdest, grossest, goriest thing in this issue; that would probably be her father David Cain/The Orphan (now with a robot arm) dumping her into a pit full of the freshly dead corpses of children. That's where she got the blood to draw the bat-shaped mask, you see. This issue, scripted by co-plotter James Tynion IV and drawn by Marcio Takara, features Cassandra breaking into the weird, sci-fi fortress base of Mother, while flashbacking to her own origin story throughout. It's...fine, I suppose. At this point, I find myself just as interested in what will become of Cassandra after this title ends as I am as to its mystery/-ies, like which of his sidekicks Batman attempted to buy from Mother. 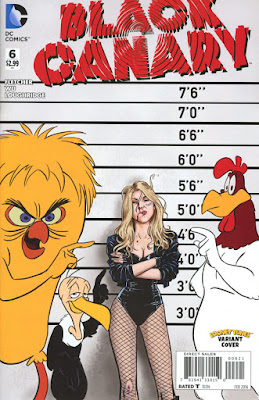 Black Canary #6 (DC) Hey, the Looney Tunes variant cover by Piea Guerra and Spike Brandt was the one in my pull-file, which is just as well, as this was one of my favorite of the Looney Tunes variant covers. This issue seems to conclude the often confusing opening story arc of the series thus far, although the cliffhanger ending and a few loose threads suggest that perhaps this is just the climax, with the real conclusion coming next issue.

Writer Brenden Fletcher's idea of a "battle of the bands" is an unusual one, as it features Black Canary (the band) and BO M (their rival band), setting up side-by-side on the same stage and playing simultaneously. That's...not how it works. Luckily, we get a more literal "battle," as Black Canary (the superhero) fights the super-powered members of BO M one at a time for the best part of the issue, a passage that realizes the rock band-that-brawls-on-stage suggestion of the first issue. Some strange stuff happens, and much of the title's story remains elusive to me (in that frustrating way that I can't tell if Fletcher is leaving stuff out or making the narrative a little too opaque accidentally, or if I'm just supposed to know details about Black Canary's background from the pages of Team 7 or Birds of Prey).

Annie Wu's art remains as gorgeous as always, there are some really great bits of pure art story-telling in here and I particularly liked some of the cutesy business during the fight scene, like Black Canary writing music with her fists as notes.

As with the previous five issues, I don't quite like this as much as I'd like to like it, and, to be honest, I wouldn't mind terribly if it was cancelled and replaced on the schedule by a new Birds of Prey book featuring the line-up on the cover of an upcoming issue of Batgirl. That would certainly free Wu up to draw this theoretical new BOP book...! 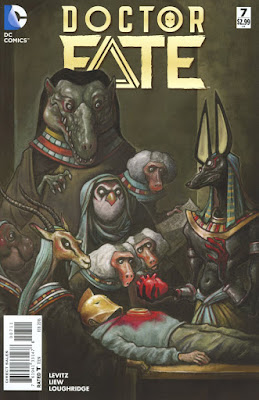 Doctor Fate #7 (DC) I don't want to jinx it, but I think the seven-issue origin story arc of the new Doctor Fate, in which he fights Anubis and attempts to thwart the Egyptian god of the dead's plot to destroy earth by drowning it for one-hundred-and-forty fucking pages is finally, finally over. Please...? I hope...?

This is maybe artist Sonny Liew's strongest cover to date, and the imagery within is also probably his strongest, as Paul Levitz's scrit takes our hero and villain to the ancient Egyptian underworld, and Liew therefore gets all kinds of cool shit to draw. Like Black Canary, this is another book I really want to like, but the scripts of which leave me not liking it as much as I feel like I should. 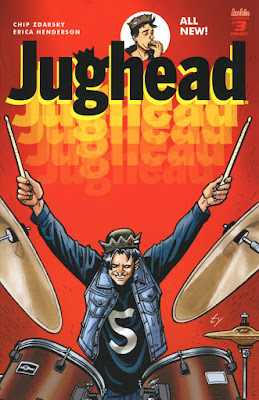 Jughead #3 (Archie Comics) Our boy Jughead finally puts it all together and unravels new principal Mr. Stanger's evil plan for Riverdale High School...unfortunately, he does during another in-story dream-sequence, this one a "Man From R.I.V.E.R.D.A.L.E." sequence in which Jughead, Archie, Betty and Kevin are all agents, trying to save their school from the robot infiltrators of C.R.U.S.H.

I particularly appreciated that this issue provided artist Erica Henderson (who, between this and Unbeatable Squirrel Girl is drawing not one, but two of the best mainstream comic* comics** available at your local comic shop) the opportunity to draw so many of Jughead's classmates: Archie, Betty, Veronica, Chuck, Kevin, Moose, Dilton, Reggie and other Riverdale residents).

I kinda wish Archie would knock it off with all these damn variant covers though, and just publish the ones by the interior artist. I mean, I love Ty Templeton's art, but I'm not crazy about his Jughead, and would have preferred Henderson's cover.

I'm still trying to figure out how the current BLACK CANARY comic relates to TEAM 7. Two different characters, she has to be younger there (since T7 is sort of set five years ago, and her husband, Larry Lance had died on the first mission), and I am guessing this is a rather hard reboot compared to Batgirl's.

As 2016 comes around, let me know if there are books you are not buying that you might want to review. I buy so few DCs now, that I'll often try a new title for the heck of it (like TITANS HUNT). I always give most of those books away, but would certainly mail them to you for reviews. Let me know, it is never a big deal. You can tell me if you bought the title or not, considering the new price point. I'll admit I'm enjoying TITAN HUNT much more than I thought I would and just picked up #3.

Wayne, I'm amazed anyone else besides me remembers the short-lived and quite awful, "Team 7," run of the New52