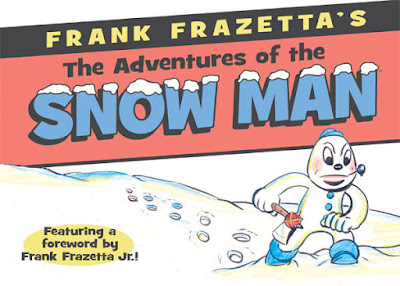 Frank Frazetta's Snow Man comics have long been high on the list of comics I wanted to see collected, as the glimpses of the character that I saw in online excerpts made him seem so divorced not only from the warrior men and women Frazetta is so rightly famous for painting later on in life, but also from the superhero and other modes of heroic fiction dominant in the 1940s. Frazetta's Snow Man was a cartoon character living and fighting his way through a more realistic world.

I was pretty excited then when Dark Horse first announced the publication of this particular book, although it's not quite what I had in mind. It's not the Frazetta Snow Man comic that saw publication (in Tally-Ho Comics #1), but then, there was apparently only one such comic ever published, so not really enough for a collection. What Dark Horse published instead, with the the help of Frazetta's son Frank Frazetta Jr, is probably something only slightly weirder, but a great deal rarer. It's the young, teenage Frazetta's first Snow Man comic, written, drawn, lettered and colored by himself, for no reason other than to amuse himself–and the friends and family he showed it to.

The Snow Man comic in this book, then, is the pre-Tally-Ho Snow Man comic. It's the sort of book that is literally a day-dream come true, even if it's not specifically what I thought I had wanted when I started day-dreaming about it.

Frazetta's Snow Man defies the standard American definition, of a figured formed of three snowballs, with stick arms, carrot nose and coal eyes (He also defies the Japanese iteration, of two snowballs). Rather, he has the basic shape of a gingerbread man cookie, and a few accessories: A little blue cap and matching snow boots, blue buttons on his chest, a pipe clenched between his teeth and a hatchet in his fist. While he's cartoony and, as the name suggests, made out of snow, he has five fingers on each hand, eye balls and eyebrows, and, if you graze the back of his head with a bullet, he bleeds (He also swims in warm water, and doesn't seem to fear being in warm places very long).

Who he is, how he came to be and what his whole deal is, biologically speaking, is never addressed*. The teenage Frazetta, according to his son, who provides a three-page foreword detailing the story of the Snow Man, had a solid premise for the character: He would patrol and defend "a place of inclement weather and subzero temperatures...intolerable to any man, woman or beast." The Snow Man alone would be able to track the enemies of America and/or Canada (there are some Mounties on page 10). Such remote wastes would be a good place for bad guys to hide out, as they'd feel safe there...safe from any one other than The Snow Man, of course). 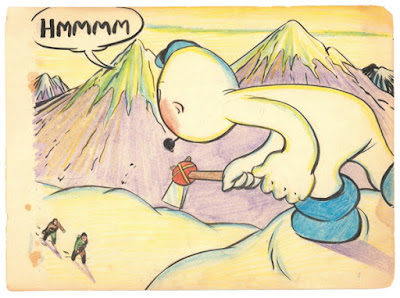 After the foreword, the rest of the landscape-format book is a presentation of Frazetta's original comic, passed on to his son; a 74-page story, although each of the pages is in itself a full panel, so it's a fleet read. That is mostly due to its relatively short length, but the storytelling is quite direct as well.

The Snow Man catches some crooks who escaped from The Mounties and returns them, before resuming his real prey, some Japanese spies who are seeking the base of the bizarre villain known as The Skull. A fantastical design, he looks to have a black head in the shape of a bizarre fossil, he dresses in a black cloak and he's attended by a green-skinned, pig-faced ogre of some sort. 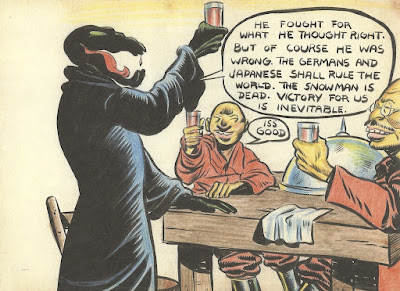 Snow Man sneaks in the most dangerous way possible, falling into a trap and then having to fight his way through a black panther and an octopus (I guess The Skull has a huge, heated aquarium under his cave head quarters?), before breaking up a banquet meeting of the bad guys.

The first line of the copy on the back cover says that the book is "Informed by World War II propaganda," which seems like a nice way of saying it's racist as all get-out in its depiction of the Japanese. These "Japs" are yellow-skinned Oriental stereotypes, and Frazetta gives them their own distinct, Chinese menu font to suggest the foreign sound of their speech, although it's mostly in English: "Is good to see you, honorable Skull. Together we shall give America much trouble. He He He He He He He." 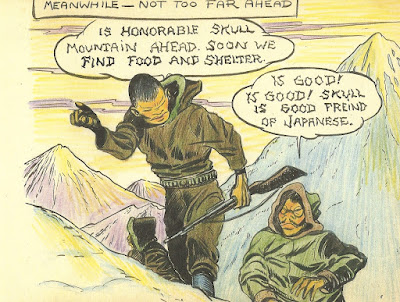 It can be tough to read this sort of thing, but I also find it tough to blame a long-dead person for less-than-enlightened views of different races, ethnicities or nationalities. I'm quite comfortable judging harshly anyone in 2015 that suggests Japanese internment camps or religious tests for immigration (which is, more shockingly than sadly, something that's actually being discussed in our national discourse), but feel much less so when it comes to condemning a teenager in the pre-mass media 1940s, when America and Japan were at war, for depicting the Japanese as less human than Candians. (In other words, the depictions might be racist, but I don't think that means Frazetta was, nor do I think it ruins the work...at least, not for me personally).

(Oddly, when The Skull first sees the Japanese men trudging across the snow, he says to himself "It is them! My loyal Japanese friends. They have escaped from the concentration camp." Interesting that Frazetta used the word "concentration camp," rather than the more euphemistic "internment camp," to refer to the mass imprisonment the U.S. subjected to Japanese-Americans during the war...it made me wonder if "internment" replaced "concentration" at some point and, if so, when and why...not that I couldn't offer a pretty good guess as to the why, of course.)

The WWII-era prejudice of a teenage cartoonist aside, the story is a strong, direct bit of era-appropriate action adventure, differentiated from the derivative by the lead character, and the sharp contrast between his fantastical nature (and loose, cartoony design) and the characters and world around him. It is, of course, the art that is the real treat here, and it is downright astounding that an artist as young and inexperienced as Frazetta was at this time could have accomplished such confident, polished practically flawless cartooning. The page-size panels really allow a reader to not only drink in the details, but admire the line-work. 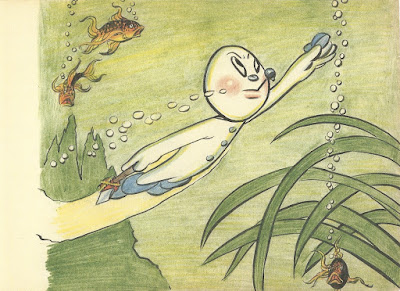 It also rewards re-readings, as you'll want to read it the first time just to see what happens, and then go back later to marvel at particular scenes and see exactly how Frazetta chose to carefully place each line.

It's a very strange book, revealing not only that the guy best known for fantasy painting was a hell of a genius cartoonist, but he was already one before he was even old enough to shave.

*At least, not in this story. In the Tally-Ho story linked to above, where he battles a character named Fang that looks an awful lot like Skull, he is apparently an Eskimo idol of some kind that is brought to life to defend them from the monster-making Fang. It's interesting to compare the pair of stories, as they actually have some stuff in common, including Skull's man-servant's resemblance to the "savages" that Fang creates to serve him in the Tally-Ho story.
Posted by Caleb at 5:57 AM