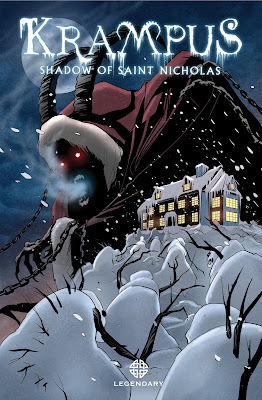 Despite my overwhelming curiosity and the fact that this was released a week or two prior to the film's release, I held off on reading it until after I saw the movie, which is probably the best way to consume the two, if you're interested in doing so: While the comic is only rather loosely related, The Krampus and his minions all appear within the graphic novel (as do some of his means of dispatching some victims), which would suck some of the surprise out of the film. And the film's best feature is its surprises and the interesting designs the villains bear.

Michael Dougherty, the director of Krampus (and the far better received Trick 'r Treat) shares a "story" credit with his two co-writers on the film on the four interconnected stories in the graphic novel. It's the co-writers, Todd Casey and Zach Shields, who handle the actual scripting of the stories, with Laura Shields assisting one one of them. Each is drawn by a different artist and, oddly, there are two colorists, one of whom is Guy Davis, who is definitely the guy you want coloring your horror comics.

Dougherty provides a nice introduction to the book, detailing his life-time preference of Halloween over Christmas, and the fact that it wasn't until he learned about the Krampus that he found an "in" to get into Christmas, as Krampus brought a bit of Halloween into the hollier, jollier holiday.

If one was expecting anything in the form of an origin or explanation for Krampus in this book, or even more background then what is on-screen in the film, one will be disappointed; he's even less of a presence here than he is in the film, appearing in about two scenes, and these stories explore Dougherty and company's very specific, very personal take on the legend, wherein Krampus is a demonic reverse-Santa Claus, coming with his cohorts to kill off the naughty, slasher movie-style. (The animated flashback in the film delivers more of what one might expect in terms of a prequel than this comic, which reads more like an expansion of the film, an alternate draft, perhaps, then a true prequel...or sequel.)

In the first story, a Vietnam vet bad Santa finds himself forced into pulling a Die Hard in a department store (I guess there are still department stores somewhere?) when a freak, Krampus-driven blizzard shuts the city down. The monster toys and the wooden mask-wearing elves of the movie stalk the survivors as they try to make their way to safety.

In the second, a policewoman and criminal with a unique and tragic bond find themselves thrown together...and fighting Krampus elves as the blizzard shuts the town down.

In the third, a large family of squatters are pushed out of an about-to-be-demolished home, and take up temporary residence in the mansion belonging to the real estate magnate responsible as a sort of revenge. Their plan was to just spend Christmas there, since he was supposed to be out of town, but he returns early and binds them all for the police...although it's monster toys and elves that come for them all first.

And, in the fourth, that same real estate magnate gets the Christmas Carol treatment, complete with the Three Ghosts of Christmas, and suffers a weird-ass fate: He's turned into one of the monster toys. If there's new information here, it's in where those toys come from. The elves set up a toy shop in the department store, and, as we see in the final story that ties them all together, they turn their victims into the toys...? I guess...?

Surprisingly, the tone of the ending is opposite of that of the film, which has an unexpected double-reversal. Here, there's only one reversal. Perhaps Dougherty just didn't want to give away the end of his film in a prequel graphic novel, but, read after the film, the sincerity and complete lack of cynicism in the ending is a real surprise.

The art is nothing to get too terribly excited about. The great Fiona Staples is involved, but she only provides the cover. Christian Dibari, who draws the first story–Bad Santa meets Die Hard!–provides probably the best artwork, although its notably static, and occasionally the action is difficult to parse. (That is, in the most confusing scene, because it's not until the fourth story that what happens in a scene in this story is explained).

Maan House, who has an extremely realistic style, does a fine job on the second story, but the inspired design-work of the film's bad guys just doesn't translate as well to comics. Stuart Sayger and Michael Montentat draw the last two chapters, and both have highly expressive styles, which clash with what preceded them, and often sacrifice clarity.

There's some interesting ideas in here–the first story in particular seems like it could have been the premise for a Krampus sequel–but it's mostly pretty generic stuff, repeating or pre-peating aspects of the film, depending on what order you experience film and comic in.

I still wouldn't mind reading a Krampus comic set in the "world" of the film, one that expands on the character's history in some way (a book-length version of that flashback scene from the film, for example), or a nastier, more direct, less muddled attempt to tell the Krampus vs. Christmas story that the film seemed to at least be attempting occasionally. This isn't that comic, though; after Dougherty's prose intro, it's basically all downhill, at toboggan speed.
Posted by Caleb at 8:51 AM