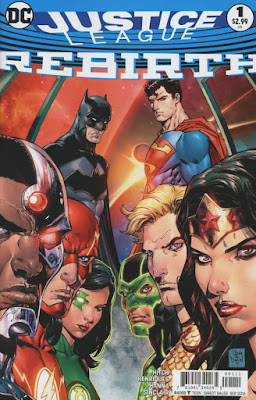 Artist-turned-writer/artist Bryan Hitch has been struggling* with the Justice League B-title, the oft-delayed Justice League of America**, for a year now, but apparently DC either liked what he was doing and what he had planned for the future, or they had no one else of equal or greater fame ready or able to inherit their flagship title after Geoff Johns' departure, so Hitch got the gig.

Here he is both writing and penciling–with Daniel Henriques and Scott Hanna inking–but when Justice League #1 ships in a few weeks, Hitch will just be writing.

As far as the writing goes, this is a very good, if somewhat generic, introduction to the current version of the Justice League, who's serving on it and what they're powers are. If you're looking for original ideas or incisive (or even mildly clever) characterization, you won't find it here, but then, the mandate of these Rebirth one-shots seem to be to offer a sort of pre-series example more than actual stories. Think of the specials as auditions by the books to you, the reader.

Set sometime after all of the individual characters' Rebirth specials (save for Cyborg's, which won't be along for a while yet), when they've all got their new costumes as status quos, it opens with a titanic, scary, Lovecraftian bug monster crawling through a city spitting out little tentacle bug things that hug people's faces and take over their minds in a somewhat Starro-like fashion (which is perhaps why Hitch mentions Starro among the threats the Justice League has faced and overcome, along with Darkseid and Rao, the latter from his own, and still not complete, first arc of JLoA).

The League of Batman, Wonder Woman, Flash, Cyborg and Aquaman confront the creature, which is called "a Reaper" and is big enough to be seen from space; it's design is probably the most interesting aspect of the issue. There's no mention of Captain Marvel Shazam or Lex Luthor (the latter of whom has declared himself the new Superman in the last issue of the last volume of Justice League, and is currently starring in Action Comics). They are eventually joined by Green Lanterns Simon Baz and Jessica Cruz and Superman.

Perhaps highlighting the wonkiness of DC's "Rebirth" Superman, much of this issue's focus is on this new Superman, and whether he should join the Justice League. If you've been following DC Comics the last few months, or even just reading all my blog posts, then you know that The New 52 Superman, the "real" post-Flashpoint Superman, has died, and the other Superman, the pre-Flashpoint one aged by six or seven years, has been living in hiding in this universe with his wife Lois Lane and son Jonathan, and has just recently decided to take up the mantle of the dead Superman. Got all that? It sure makes any and all interactions between Superman and any other character outside of Lois and Jonathan annoying!

While the League contends with the Reaper, Old Man Clark and Lois "White" discuss whether or not he should join the League in their kitchen, and, as you can tell from the cover, he eventually decides to suit up, fly off and save the day (Another flashback shows the Leaguers discussing what they should do about Superman II, and Batman decides they should offer him membership in order to keep him close).

The story has a kind of weird double-ending, in which the League poses and declares themselves/are declared Earth's champions and defenders twice, first organically within the story, and then in a last page splash.

Artistically, Hitch is a good "get" for a Justice League book, just as he was last year and in 2000, but in both cases he proved unable to meet a monthly deadline. That's why he will only be writing the upcoming Justice League, which makes his presence as pencil artist here maybe unfortunate. He does a fine job on most of the book, and it gives the one-shot an aura of special-ness, but if the idea was to get readers excited for the ongoing book that launches in two weeks, perhaps having artist Tony S. Daniel (ugh) draw it would have been best.

I'll certainly give the first issue a try, but based on what I know so far–decent but not extraordinary writer, artist I'm not fond of, the always bumpy and getting bumpier DC continuity–I'm not too terribly excited about the book personally. But given the popularity of Daniel, it's not hard to imagine Justice League remaining one of DC's more popular titles, even if it doesn't end up moving as many copies each month as it did when Johns was at the helm.

*And by "struggling" I mean DC has only published eight issues of the monthly book since its debut in June of last year...and one of those issues was an unannounced fill-in issue by an entirely different creative team starring Martian Manhunter, who had and has nothing to dow with this iteration of the team. 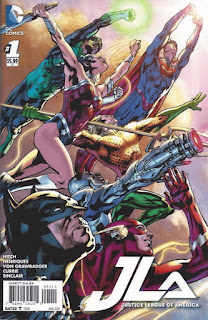 But when I was unable to find it on comics.org I realized that it was actually Justice League of America, a name the New 52 Justice League never actually used, but the ARGUS-sanctioned rival team did. 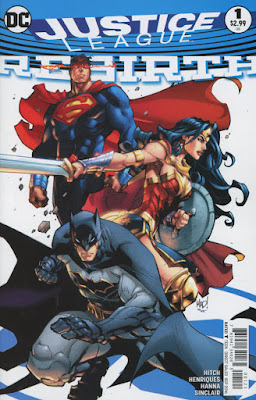 Okay not to go all Frederic Wertham or anything, but maybe not the best arrangement of Wonder Woman's fist, her sword and Superman on Joe Madureira's variant cover for this issue...

It seems as if we see pre-Flashpoint Superman's appearance in ACTION completing contradicting this issue. Jessica Cruz continues to either have the tattoo over her eye or have it missing. If you read ACTION, you'll see pre-F S rather quickly shave his beard off and go fight Luthor. Compare it to the JL issue.

While the League contends with the Reaper, Old Man Clark and Lois "White" discuss whether or not he should join the League in their kitchen...