I don't know what to make of Tom King's Batman just yet. 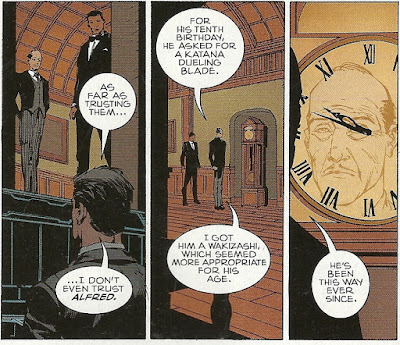 I loved the above few panels from Batman #2, which is written by Tom King, pencilled by David Finch and inked by Matt Banning and Danny Miki. Bruce Wayne excuses himself from a fundraising event in The Morrison Room of the mansion and walks to the secret entrance to the Batcave with partners Alfred Pennyworth and Duke Thomas a few steps behind him. When Wayne tells them that he's going to bring new Gotham-based superheroes Gotham and Gotham Girl with him to answer Commissioner James Gordon's Bat-signal summons, Thomas asks, "Do you trust them?"

Above you see Wayne's answer, and Alfred's response. It's a nice, sharply-scripted exchange showing essential elements of both Batman Bruce Wayne and Alfred's personalities, as well as their unique relationship, which is at once a father-son and boss-employee thing. They're technically partners, but their balance of power is like a see-saw, and obviously as the older one, Alfred was in charge for a long time, and now just seems resigned to Batman's child-like qualities.

He's also joking, of course, which is one of the cool things about a well-written Alfred; he's ability to constantly needle and deflate Batman in a way no other characters can. At least, not effectively.

So that scene was great. The rest of the book, I'm still not so sure about. I wrote about the first issue previously. The main plot, based on the attention given to them in the first two issues, revolve around the sudden appearance of two new super-powered superheroes with unimaginative names, characters who are essentially just one more analogue to Superman...and Supergirl. (The inclusion of Gotham Girl at least makes this slightly different than all those other comics where Superman-in-all-but-name show up.)

Gotham, the hero, wears a cape, he's super-strong, he flies and he has all sorts of vision powers. His female companion is a blond woman in a skirt, with all the same powers. They arrive at the same time that Batman begins contemplating his mortality and his legacy, and that a few, high-profile crimes are committed by a mysterious, behind-the-scenes player who will be familiar to fans of Batman comics, cartoons and even video games.

It all seems a little disconnected from what I've been reading in the other Batman books prior to the "Rebirth" brahnding of the DC Universe, although I did miss the last few issues of the previous volume of Batman, so it's quite possible these things were addressed satisfactorily and I just didn't catch them.

For example, while Batman: Rebirth #1 went to some lengths to explain how Bruce Wayne got his entire fortune back, how he reclaimed Wayne Manor and even that he had a new costume, I was and remain surprised to see Gordon is police commissioner again after the events of Batman Eternal and the "Superheavy" story arc of Batman. It's also weird to hear him cracking a joke about the new heroes' costumes.

"Is it really easier to fight crime with a mask on?" he asks, lighting his pipe. "I'd think it would itch." Well, having fought crime with a mask on as Batman, Gordon should know, shouldn't he? I suppose he's trying to keep that fact secret from Gotham and Gotham Girl, but it's a weird crack for a guy who spent so much time this past year being Batman. (Also, I was caught off guard with the pipe smoking. I thought New 52 Gordon smoked, then quite to be Batman, resorting on patches and stolen cigarettes. Odd to see him going back to a pipe now. Hell, he's only supposed to be like 40 or something now, right? Maybe he should be vaping.)

There's a weird scene previous to either of those in which Bruce Wayne, still wearing his costume, is standing in the Batcave, contemplating his mortality as Alfred comes down to urge him to get up to the fundraiser.


I was dead. I knew the options. I knew there weren't any options. There's going to be others, Alfred. Other planes. Asteroids. Aliens.

I won't be able to stop them. I'll die. Then Dick will take my place.

This is a weird line of thinking coming from Batman. He explicitly mentions his protegee Dick Grayson, who filled in as him for Batman the time he died before the last time he died, but he's also trained or is currently training such partners and successors as Red Hood Jason Todd, Red Robin Tim Drake, Robin Damian Wayne, Batgirl Barbara Gordon, Bluebird Harper Row, Spoiler Stephanie Brown, Orphan Cassandra Cain and now Duke Thomas. That's a lot of young people able to defend the city from crashing airplanes and aliens in the future. And hell, the last time Batman died, none of them took over, but a completely different person without his sanction stood up and did a pretty good job of being Batman (That would be Gordon, as mentioned above).

And please correct me if I'm wrong, as things got a little wonky at the end there and, like I said, I missed a few pages, but I thought a large part of Scott Snyder's "Endgame" and "Superheavy" story arcs revolved around Bruce Wayne's attempts to build an immortal Batman, which involved backing-up his own brain and mind and storing it outside of his body and, I don't know, cloned bodies...?

I'm not sure where Taylor is going with this scene just yet, and how exactly Gotham and Gotham Girl will fit into it–presumably their being supermen is an attractive quality that Batman would like in a successor–but it feels like its coming a little too close on the heels of Snyder's last arcs that dealt so much with the idea of Batman as a legacy and an immortal idea that can exist outside of Bruce Wayne.

Finally, there's the reveal of the villain on the last page. I'm relieved it wasn't Rorschach or Ozymandius, as I initially feared, but I was surprised to see that particular villain, in that particular company, and involved in such particular acts, given the last time I saw him he was in Gotham Academy, where minor Batman villains fill-out the ranks of the school's faculty.
Posted by Caleb at 11:21 AM

It's interesting. Most of your concerns and complaints are continuity based. I've read only scattered bits of the New 52 past issue 5 or 6 (but more of Batman than anything else), but I'm looking at this as a pretty distinct reboot, even if it was a soft one, not entirely based on any sweeping in universe change.

They moved some pieces around. It's not on me to try to figure out where things were, unless they directly affect the story being told. Now, then, if things feel disrupted between Detective and Batman, as you noted, that's a different issue. If they decide to just wipe the slate clean six issues from now or stop paying attention to things after this point, that's a bit of an issue.

But this was a very distinct rebranding/jumping on point, and I think you'll enjoy things more if you worry less about how things got where they were based on pre-Rebirth comics and see this as a soft Crisis of sorts, where a number of elements were kept but certain ones weren't or are being brushed under the table to tell the story the creators are trying to tell.

Even then, the mask comment by Gordon gave me a little pause, but I decided to just go with it. They haven't brought up his tenure as Batman yet, so we're obviously not supposed to focus on it and instead to look to the future based on this new status quo.

I think you can feel that's a misstep but I think it's a mistake to judge the comic primarily on that and not on the story being told.