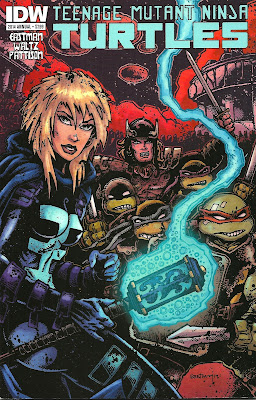 Well this is one strange comic book.

The slim, 48-page special came with a spine and was drawn in its entirety by Teenage Mutant Ninja Turtles co-creator Kevin Eastman, who has been co-plotting and providing covers for IDW's volume of TMNT comics. It's not often that Eastman provides interior art for these comics, but it's always an extra incentive to read them when he does so.

Sure, his presence always bestows a imprimatur of legitimacy on the proceedings, and the more involved he is the stronger the imprimatur, but I just generally really enjoy his inky, gritty artwork, and it's always a pleasure to see him draw pretty much anything, but his Ninja Turtles always look realer than anyone else's (with the exception of the ones Eastman drew with Peter Laird, of course).

It always amuses me when he does draw IDW's Turtles and associated characters, though, because he basically just draws his original versions, with no real concessions to the redesigns they've all gone through. His Splinter is always a Batman-eyed werewolf, his Casey Jones is always an adult with 1980s hair, and so on.

None of that has anything to do with how strange this particular comic book is, however.

What makes it strange is that it essentially offered a bizarre continuity patch to a then almost 30-year-old comic book story that was no longer part of the IDW iteration of the TMNT's continuity.

In this story, Eastman and co-plotter Tom Waltz–Eastman scripts the book himself himself–introduces Renet and a barbarian parody of the old Marvel Comics version of Conan into this particular TMNT narrative. That Conan parody is apparently meant to be a stand-in for Dave Sim's Cerebus The Aardvark, who of course appeared in 1986's Teenage Mutant Ninja Turtles #8 by Eastman, Laird, Sim and Gerhard. 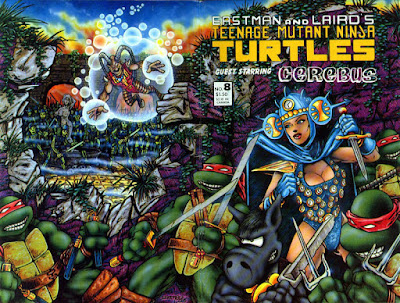 That was the comic that first introduced Renet, Savanti Romero and Lord Simultaneous, and while they've all appeared elsewhere through various TMNT comics and cartoons, Cerebus has not because, well, he's Cerebus, and not really a TMNT character (Stan Sakai's Usagi Yojimbo, who similarly shared story-space with the Turtles back in their pre-cartoon fame days, did appear in toy form and in two different iterations of the cartoons, though).

But here's the really strange thing. While there's a new, non-aardvark Conan parody in this comic book, it is not a retelling or new version of TMNT #8. It's an entirely different story, with only a few surface similarities, like the presence of Renet, Simultaneous and the Turtles.

I can't really figure out what's going on here, or, more precisely, what was going on in Eastman's head when he made this book. It's the presence of Baltizar, the Conan/Cerebus stand-in, that really confuses me, as he evokes TMNT #8, and serves as a constant reminder of that comic.

So the story is this. A heavily redesigned version of Renet–that's her on the cover, at the top of the post–appears in the Turtles' current church lair, and she recruits them into a vague mission that involves their fighting for her. She knows them, and on account of being both scatter-brained and a time traveller, isn't sure if they know her or not.

I kinda like this set-up, where it doesn't matter overmuch if this is their first meeting or not, because, obviously, it's not, and this has happened before...repeatedly, even. Renet, like readers, knows that, and the best way to approach this story (and this comic in general) is probably not to fuss overmuch with what happened when and which stories "count" and which ones do not.

Then things get weirder still, as she transports them to some big, floating inter-dimensional city...at which point colorist Ronda Pattison stops with the full-color, and the narrative becomes black and white for most of the rest of the comic. It's a reverse Wizard of Oz, but rather than the black and white of the Mirage comics, it's a heavily shaded and toned black and white; black and various shades of gray, really.

The Turtles are promptly thrown in a cage where they meet Baltizar, who is as big a rambling, motor-mouthed fool as Renet, only more so, really. Contrary to the image on the cover, interior Baltizar has a little lame goatee to further distinguish him from Conan and, when color resumes during the framing sequence, he is shown to be blonde (see the image at the bottom of the post). 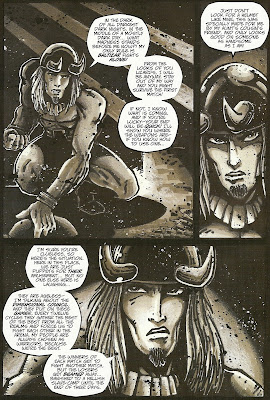 Baltizar and the Turtles are among the many warriors forced to fight in deadly gladiatorial combat at the behest of "The Dimensional Council" for the entertainment of a stadium full of people. Apparently Renet, the apprentice of exiled council-member Simultaneous is to...ummmm....Well, there's going to be a few days of her squad fighting, and then they will eventually convince all the other combatants to turn on the Council, most of whom don't really like these fights and just go along with it because the most evil of their number is a big, mean jerk, I guess...?

I don't know. It doesn't really make much sense.

But we do get to see lots of Eastman drawings of Conan and the Turtles fighting various alien warriors, including, at the climax, a Triceraton named Zog. 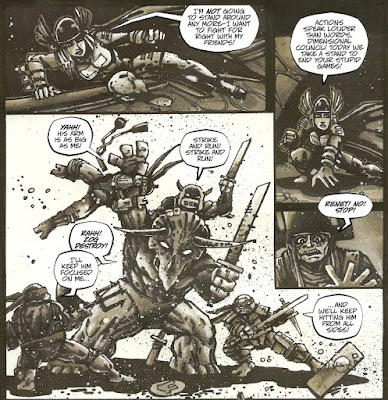 And then, with the games abolished and the idea of replacing them with a more humane "Battle Nexus" floated, Renet zaps the Turtles back home (and into color) and she and her boyfriend Baltizar hang out in dinosaur times for a while.

Maybe the weirdest part of all, however, is that Splinter spends most of his panel time on the toilet, which is really something I didn't need to see. I mean, I've gone about 30 years of my life never once imagining the Turtles or Splinter going to the bathroom, and now here their creator is, drawing Splinter, reading a newspaper on the toilet.

And what's that "Holy s..ah...smokes!" bit all about Eastman? The other word may start with the same letter, but it's a different phoneme!

As a story, this was a pretty mediocre one, although I did enjoy the artwork. I was a little frustrated that it had absolutely nothing to do with the mini-series Turtles In Time however, where Renet appears repeatedly, and is the apparent source of the Turtles' being lost in time and traveling through various eras in each issue. That story had its moments (i.e. the entire first issue, drawn by Sophie Campbell), but it seemed to be missing something, and I assumed that it seemed that way because I read the collection of that miniseries before reading this annual, in which Renet is introduced.

But nope. Neither comic has anything to do with the other, to the detriment of Turtles In Time. As a story. As a collection that includes 20 pages of Sophie Campbell drawing Teenage Mutant Ninja Turtles fighting dinosaurs, Turtles In Time remains a masterpiece.

Like most of the IDW TMNT comics I've read then, this one left me disappointed. That is one comic book series that I really, really want to like–hell, I want to love it–but it rarely if ever rises above mediocre, and certainly never seems to get the best out of the source material. 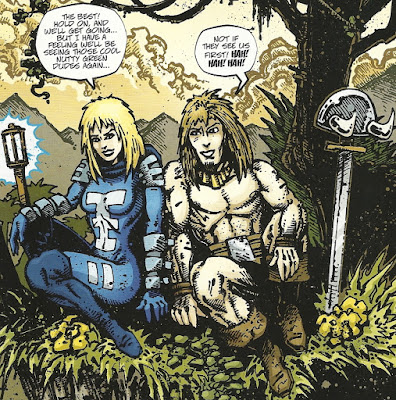