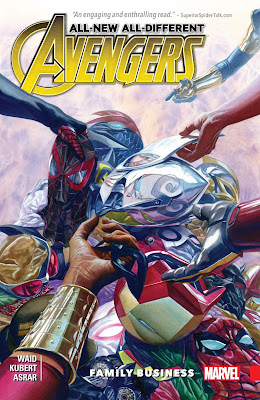 This second collection of the Mark Waid-written A-title of the Avengers franchise contains six issues and an out-of-order interruption from a Free Comic Book Day giveaway, and it takes a while to get going, as the first two issues are tie-ins to the "Standoff" crossover storyline. These first two issues, both drawn by Adam Kubert, don't quite work on their own, particularly as the second of these ends with Winter Solider and the Captain Americas Captains America rallying all of the various Avengers teams for a big battle that...happens elsewhere.

That's followed immediately by a short story drawn by Alan Davis and Mark Farmer in which the All-New, All-Different Wasp narrates her infiltration of The Vision's body and her planting of bombs within it, which blows him up; it originally appeared in Free Comic Book Day 2016 [Civil War II] #1.

And then the volume starts for real and, yeah, 50 pages or so into a 140-ish page collection isn't the ideal place for a story to start for real. Mahmud Asrar takes over the art chores for the rest of the book.

The Vision starts malfunctioning very strangely, attacking the other Avengers in their hangar base, and then a new Wasp shows up, helping them deal with The Vision problem...which we already read about, as that what was happening in the Alan Davis-drawn short (an asterisk in the bottom of a panel of the issue refers readers to the FCBD special). This new Wasp is Nadia Pym, daughter of the currently dead Hank Pym and his late first wife, who was being raised by bad Russians and used her knowledge of Pym particles to escape, break into her late father's lab and build herself a Wasp suit.

Given that there are now two Captains America, Spider-Men, Hawkeyes, Hulks, Thors and Iron Men, it's not so unusual that Marvel would introduce a second Wasp, although it is somewhat unusual that a) The original Wasp is still around, in full possession of her powers and still actively super heroing, and b) As the daughter of Pym and his Silver Age wife, Nadia is a white-skinned woman of European descent, just as Janet Van Dyne is; in every other case of Marvel introducing a second version of a character it was to bring some diversity to their universe, either in terms of race or gender or both.

Because of that, I have to assume Waid (or someone else) has longer-term plot reasons for introducing a new, second Wasp...unless Marvel Comics just wanted to have a daughter of Hank Pym be their current Wasp, in order to more closely reflect the status quo of the Marvel Cinematic Universe, but if that's the case Nadia is pretty different than Ant-Man's Hope Van Dyne in a couple ways. Starting with her name.

Jarvis, who is particularly sensitive about Janet Van Dyne's legacy, decides to take Nadia to meet her namesake and kinda sorta but not really step-mom Janet, and the pair hang out together. Meanwhile, the rest of these Avengers all go out into outer space in order to help Nova look for his father. They don't find him, but they do find a curious space trap that embroils them in a battle with a particularly formidable classic Marvel villain. Waid uses a pair of items from Marvel lore in a rather inventive way to have our heroes triumph over him.

All in all, it's a pretty messy package, and not one that is particularly well-suited to casual, trade-only readers. Of course, if you missed the single issues, there isn't really any other way to read it.
Posted by Caleb at 9:30 AM

"Of course, if you missed the single issues, there isn't really any other way to read it." ...other than digital purchase, or as part of the Unlimited digital package, or by buying back issues via eBay or internet....

Fun fact, Nadia is the shorten Russian term for "Hope", which is not so coincidentally the name of Hope Van Dyne in the "Ant-Man" movie. So Waid really did sneak in a character from the MCU in a sly subtle way.