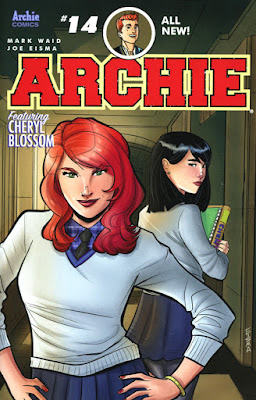 Archie #14 (Archie Comics) I've been able to justify shelling out $4 a pop for all of Archie Comics' new line of comics because each 20-page issue is generally followed by a classic reprint of some kind that adds to the page count, and often these are introduced by a prose piece by the writer, adding one more page of content. Not so this issue!

After Mark Waid and Joe Eisma's 20-page story comes...six pages of Jughead #10, which has already been released and which I have therefore already read. It's a really good comic and all, but I'm not entirely sure of the wisdom of reprinting so much of it (about a third of it) in the back of Archie as a sort of super-sized ad. I mean, even if it is effective and gets those who are reading Archie but not reading Jughead to start reading Jughead (Do such readers exist? The fools! Jughead is far superior to Archie!), it doesn't exactly add any value to the book.

Here's hoping it was a one-off thing, and next issue (and all future issues) will include reprints of classic Archie comics that are somehow relevant to the story that preceded them. Otherwise, I'll likely switch to reading Archie's line in trade and I'd really rather not. I like the comic book format, although it's getting increasingly difficult to find comics I feel comfortable reading in this format.

As for this issue, it is divided between Veronica and Cheryl's battle for social supremacy at their all-girls boarding school in Switzerland and the action back in Riverdale, wherein Archie has become Jughead-like and to save him, Jughead must become Archie-like. 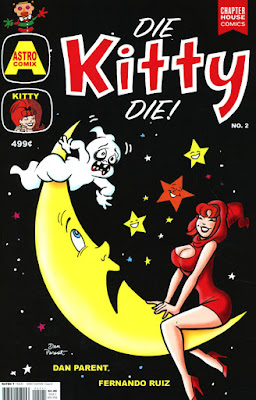 Archie Comics creators Dan Parent and Fernando Ruiz continue their story about an Archie Comics-like publishing company that wants to goose the sales on their Sabrina The Teenage Witch-like character's books by killing her off...and since she's a real person, that means murdering her. Here the Sabrina-like character battles the Casper-like ghost character and analogue's to Casper's supporting cast, ultimately winning the day by calling in a favor from the Lil' Hot Stuff-like character.

This book's weird as hell, despite it's super-simple premise. A lot of the jokes don't quite land for me, but I like these sorts of analogue comics, and while I've read what feels like a couple million high-concept comics using analogues to the most famous superhero characters, I don't recall ever reading one devoted to Archie and Harvey Comics characters like this. It certainly helps that the creators are ones whose work is so closely associated with one of those publishers, and while the subversive qualities are mainly relegated to a PG-13 level of naughtiness, the sexual stuff all works.

I'm not crazy about Chapter House's lay-out–I wish, for example, they relegated their many house ads to the back of the book like Archie does, which I think would help J. Bone's fashion spreads pop a bit more, so that they could serve either as centerfolds or back matter; right now they just kind of get lost among the comics content and the ads for other Chapter House books. 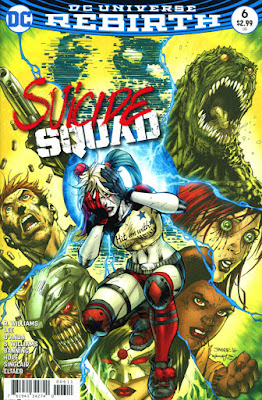 Suicide Squad #6 (DC) The Black Vault prison which had encased the giant General Zod has started driving everyone at Belle Reeve insane with murderous rage, which makes Harley Quinn...sane? "They've all gone insane, and it's had the opposite effect on me," as she tells it. I'm not entirely sure that's how mental illness works, but then, superhero comics have never been the best place for realistic depictions of mental illness, have they? I mean, Batman's devotes much of his life to fighting a bunch of domestic terrorists that are kept in something between a zoo and a Victorian insane asylum, after all.

I'm not entirely sure I'm ever going to quite get used to the weird pacing of this book, which is still divided into a 12-page main story penciled by Jim Lee and a 10-page back-up story featuring a guest artist and spotlighting the origin of a particular member of the Squad. This month the artist is Carlos D'Anda and the character is Killer Croc, given yet another origin story that differs slightly from his last origin story from the New 52 (His previous post-Flashpoint origin story had him born and growing up in Gotham City; here he's born and grows up in Florida, as he always had pre-Flashpoint).

I wonder how long they're going to be able to keep this format up, given that they're just about out of characters to tell the origin stories of, but then, the upcoming Justice League Vs. Suicide Squad crossover event, which is advertised in this issue, looks like it will swallow up Suicide Squad #8-#10, the content of which will presumably be by a completely different creative team and thus, one assumes, feature a different format.

In this issue, everyone in Belle Reve goes crazy and tries to kill everyone else. Of interest? El Diablo is apparently still around, as we see him in the mess hall with Deadshot and Harley (his tattoos look weird, like Lee and the other artists weren't sure what tattoos to give him, but then, there are four different inkers involved here, and consistent character designs haven't exactly been a strong suit of the publisher since the New 52 reboot, especially on this franchise). And Captain Boomerang appears, looking like a zombie and exploding into confetti; he's in the ad for the Justice League crossover, so one assumes he gets better eventually.

The back-up tells of an incident from Waylon Jones' childhood, in which he encounters a Lake Placid-sized salt water crocodile hanging out in the swamps of Florida, having apparently nibbled a kid to death and left him leaned up against a tree, awaiting Waylon and a friend of his to come find and fight him. 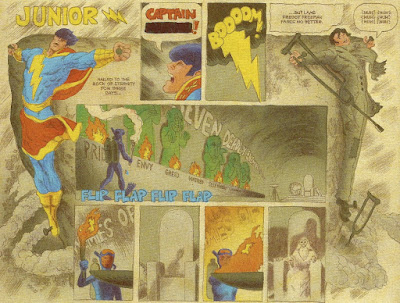 Super Powers Cave Carson Has a Cybernetic Eye #2 (DC Comics) The new Doom Patrol is a pretty interesting, very well-drawn Grant Morrison tribute comic attempting to serve as a grand fusion of all Doom Patrol comics. Shade, The Changing Girl is just this side of unintelligible, and, if you ask me, extremely uninteresting. Mother Panic is a Batman comic with swear words, the most compelling aspect being how the design of the vigilante character's superhero costume clashes so violently with artist Tommy Lee Edwards' realistic art style. And then there's Cave Carson Has a Cybernetic Eye, which is by far the best of the new Vertigo DC's Young Animal books, in large part because of its three-page back-up feature, Super Powers by Tom Scioli.

Out of curiosity, I counted panels, and there are 48 panels in Scioli's back-up which, remember, is just three pages long. The title feature, meanwhile, has 95 panels, but they are stretched out over 22 pages. Can you imagine what Scioli could do in 22 pages? Could you imagine him on a new volume of Wednesday Comics, filling those giant newspaper pages with his postage stamp-sized panels? The mind reels.

I honestly would not have expected Scioli to find the DC Universe such a fertile setting, particularly given what a reader might assume would be covered in a strip taking its name and logo from the 1980s cartoon and toy line (which was, essentially, just the Justice League vs. Darkseid). And yet in the first third of this installment, "Wonder Twins Part Two," he shows a Morrisonian ability to view all of DC's publishing history as a single universe, and to draw obviously if unlikely connections, like teaming Flipper Dipper from Jack Kirby's Newsboy Legion with the Sea-Devils, wherein they discover a temple of Darkseid's...and Captain Marvel Jr., Shazam and the original Mister Miracle also all make appearances...in that one single page.

I nodded furiously at the appearance of Thaddeus "Mister Miracle" Brown, who is the bearded fellow who gave Scott Free the moniker and costume after he escaped Apokolips scott-free and came to Earth (and shown here, during World War II, as Thaddeus Braun). After first encountering him in the collection of Kirby's Mister Miracle comics, I often imagined him adventuring in the post-WWII, Cold War era of DC history, during which the DCU was temporarily superhero-less (a time when, as per Darwyn Cooke's The New Frontier, teams of adventurers like The Sea Devils from a few panels previous filled the gap left by the retired Golden Age heroes), or perhaps even being one of the masters that a young Bruce Wayne sought out to help train him during his time wandering the world.

Aside from the sheer variety of characters squeezed into this page, what most impressed me was the middle section, above, in which we see Captain Marvel Jr., identified only as "Junior." Remember, DC has forbidden the use of the name "Captain Marvel," apparently, renaming Captain Marvel "Shazam," and thus making it really fucking hard to use the rest of the Marvel Family, consisting as it does of characters named Mary Marvel and Captain Marvel Jr, the latter of whom transforms by saying the magic words "Captain Marvel!" (Mary Shazam and Shazam Jr. just don't quite sound right, do they?).

I kind of love how Scioli has Captain Marvel Jr. simply say "Captain Marvel" and then have a big, black mark over the offending word, preemptively censoring or redacting it. It's both true to the concept and sensitive to whatever the current editorial thinking on the matter is, while also reading and feeling subversive in its execution. I'm glad he did it, and I'm glad DC let him do it.

As for the preceding 23 pages? Cave rebels against the evil corporation, steals his mole machine and teams up with Wild Dog. They kill so many people, and man, you don't really think about how well-suited drill machines are to car chases until you see one in action. Props to co-writers Gerard Way and Jon Rivera for turning out the one Young Animal book that feels most like a first generation Vertigo book, rather than a tribute to those books, which, with a swear word or two less, could fit rather neatly into the DCU just fine. Michael Avon Oeming's artwork makes it sing, although there's at least one passage where I have no idea what was supposed to have happened. Nick Filardi does some pretty great stuff with the coloring, too, particularly in the attempted abduction scene.
Posted by Caleb at 12:49 PM