Review: Superman and The Justice League of America Vol. 2 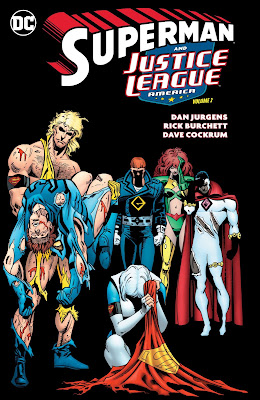 As I had previously noted, packaging writer/artist Dan Jurgens' brief 18-ish issue 1992-1993 run on the era's main Justice League book as "Superman and Justice League America" made a lot of sense if you're trying to sell these comics in trade form in 2016...at least until you get to volume two, as Superman dies in the first of the monthly issues collected here (his Justice League encounters Doomsday before Superman does), is mourned in the next one and then is completely absent for the rest of the run.

That annual is from the "Eclipso: The Darkness Within" crossover event storyline that ran through all of DC's annuals that year. As with similar events of the time, the relevance of each tie-in varied considerably from instance to instance, but this one is a great deal more relevant than, say, any of the Batman-related ones.

Jurgens is merely credited with "Dark Design," which I suppose could mean either plotting, or lay-outs or both, although it doesn't look like he designed the pages themselves. Dan Mishkin writes, while Dave Cockrum pencils and Jose Marzan Jr. inks. Dr. Bruce Gordon and a few other heroes join Superman and the League at their headquarters–including Wonder Woman and Metamorpho–as they strategize about the threat of Eclipso. This is relatively early in the villain's attack, but he manages to possess Maxima and send her to Nevada to cause destruction on a scale that draws the League there, while he himself stalks and battles Blue Beetle throughout the team's headquarters. In the end, his plan is only advanced a step or so, as he gets another "eclipsed" soldier for his army, but it's pretty remarkable how much action the longer page-count offers. These days, an annual is generally only slightly longer than a regular issues, maybe twice as long if you're lucky, but this is just shy of three times the length of an ordinary issue, allowing the scenes to be drawn out much longer. You sure got a lot more punching and blasting back in the day!

Of course, there's no real resolution to the story, as this was just one of the 20 parts of the storyline, and the collection jumps ahead to JLA #66 from there. I personally missed this annual the first time around, as I was a teenager with little money to waste on comics, cheap as they were, back in 1992. Looking now, I see that I've actually only read about a half-dozen of the 20 discrete chapters of the story. It was designed so one need only read the first and last chapters Eclipso: The Darkness Within #1 and #2, with few of the issues in-between being all that relevant, but there sure was some cool stuff in there, as when pretty much all of the un-eclipsed heroes had to fight an eclipsed Superman. I wouldn't mind reading a collection of this entire storyline, but like similar annual events Armageddon 2001 and Bloodlines, collecting it into trade would prove challenging, based on its size alone.

The next issue is also one that occurs mid-storyline. Doomsday takes on Guy Gardner, Booster Gold, Blue Beetle, Bloodwynd, Maxima, Fire and Ice and has pretty much torn them apart by the time Superman arrives on the last page. And that's that issue (Spoiler alert: Superman and Doomsday kill one another in a brawl that continues all the way into downtown Metropolis. They both get better and come back to life about a year later though).

And then it's time for the "Funeral for a Friend" tie-in issue, where the superhero community convenes at New York City's JLA HQ to mourn Superman, and Oberon passes out the black arm-bands with the S-shield on them. From here on, the collection tells a cohesive ongoing story...albeit a rather rocky one that must have seemed entirely unexpected at the start of Jurgens' run.

In the "Funeral for a Friend" issue, the League takes stock after their battle with Doomsday: Fire is powerless, Ice decides to quit, Booster Gold's costume was destroyed rendering him powerless and Blue Beetle is still in a coma. These characters are still the focus of the issue, but Jurgens lavishes attention on the many guest-stars, each of whom get a few lines about Superman and/or death, and each of whom is introduced in a dramatic action pose. Reading it now, it's actually a bit of a surprise that DC resisted the temptation to just launch a new team of their biggest heroes right then and there. With Superman dead, there was certainly an in-story rationale and motivation for the "old" Justice Leaguers, who the publisher was for whatever reasons resistant to use more than one or two of at a time on a League roster, to form a new, all-star League of the sort we wouldn't get into Grant Morrison, Howard Porter and John Dell's JLA.

The actual make-up of the League that follows the Doomsday-damaged one is a little more interesting, and they are formed by the end of the next issue: Maxima, Guy Gardner and Bloodwynd are joined by new recruits Agent Liberty, The Ray, Black Condor and new leader Wonder Woman. They...don't last long. At that point, there are only two story arcs left in Jurgens' run: The fairly epic five-part "Destiny's Hand," and then a two-parter finally resolving the issue of Bloodwynd.

And so Jurgens' League finds itself up against evil versions of The Flash (in black!), Hawkman, Martian Manhunter, Green Lantern Hal Jordan, Firestorm, Green Arrow, Black Canary and The Atom. It's a precursor of sorts to the "Justice Lords" episodes of Justice League Unlimited and the video game/comics of Injustice: Gods Among Us, which gives Jurgens the opportunity to draw the Satellite Era league, his League, some classic villains and bring his apparent favorite character The Atom Ray Palmer into the pages of his Justice League America.

The ending of this book, and thus of Jurgens' run, seems pretty abrupt, and some of the characters introduced seem to have barely been there at all. Agent Liberty, for example, has few lines after he's officially recruited to the team. Looking ahead, this was the start of a pretty chaotic period for the franchise. Dan Vado takes over as writer for a little bit, adding a few characters to the extant line-up (Captain Atom and Garrick), then there's the controversial "Judgement Day" crossover story with the other Justice League titles of the day, the "Zero Hour" crossover that introduced Triumph and, finally, Gerard Jones takes over for an almost-two-year run that brings the series to its conclusion, making way for the previously mentioned Morrison, Porter and Dell JLA.

I will be curious to see if what follows gets collected at all and, if so, how (Maybe as Wonder Woman and The Justice League of America...?). The "Judgement Day" and "Zero Hour" are easily collectible as standalone trades (the former can have Mark Waid's name splashed across it, the latter, which is a three-part story and might need paired with other material, can have Christopher Priest and Phil Jimenez's names highlighted), but given that the Vado and Jones runs aren't terribly well remembered as anything other than the stuff between the Giffen/Jones JLI era and the Morrison JLA era, demand is probably limited only to committed fans like me who would rather own trades that back-issues at this point.

They are still a lot better than a bunch of other Justice League comics that have been collected though! Like, almost everything since Identity Crisis, maybe...?
Posted by Caleb at 5:33 AM

is the Eclipso story the one where Guy flies off and gets a big vat of sunshine...from the actual SUN and saves the day? I loved that story!

The dumping of sunshine doesn't occur in this particular annual (that happens in an ADVENTURES OF SUPERMAN ANNUAL, near the end of the event), but this is the start of Guy (and the Justice League's) conflict with Eclipso.

It looks like the Vado run will indeed be collected as "Wonder Woman & the Justice League America." Vol. 1 includes issues 78-83 and Annual #7; Amazon says it's scheduled for March 2017.