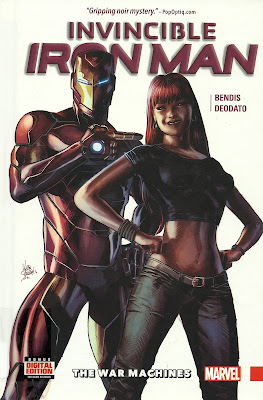 I really liked the first volume of Brian Michael Bendis' new Iron Man title, much to my own surprise. But few of the nice things I said about that first collection can be transferred to this second collection, which is, admittedly, a little weird, but it seems to be a pattern with some of Marvel's post-Secret Wars relaunches. For example, I also really enjoyed the first volume of the new Daredevil, and the second volume? Not so much.

Here the major problem is that artist David Marquez is gone, replaced by frequent Bendis collaborator Michael Deodato. I'm not a fan of Deodato's style for several reasons. The most immediate in this particular instance, however, is that it looks absolutely nothing like that of Marquez, so there's a real sense of aesthetic whiplash between the two Invincible Iron Man collections Bendis has written so far, despite the fact that the characterization, the plotting and the sense of humor remain unchanged. Simply put, as all of you and Bendis himself and surely the people at charge at Marvel know, comics is a visual medium, and it hardly matters if the writer stays the same but the artist changes–and changes so drastically–because the scripting may be the same underneath, but this looks, reads and feels like an entirely different book.

The single most distracting thing about Deodato's artwork here, aside from the fact that Deodato is suddenly drawing the book in a completely different style, is his reliance on celebrity likenesses throughout. His Tony Stark, his Mary Jane Watson, his James Rhodes and his Amara Perera may all very well be based on actual actors, but, if so, I couldn't place them; Stark doesn't look like he's being "played" by Robert Downey Jr. in Deodato's artwork, which is actually kind of unusual, given that Bendis is so clearly inspired by RDJ's performance of the character.

Doctor Victor Von Doom, however, is given such a particular, even peculiar face (remember, he's got his face back and is no longer rocking the metal mask, thanks to the events of Secret Wars) as opposed to the sort of generically handsome one Marquez drew that it was driving me crazy trying to place him while I was reading this volume. I eventually Googled the guy from the last Fantastic Four movie and, it turns out, Deodato is in fact drawing Von Doom as the actor who played him in it, Toby Kebbell (UPDATE: Or is he? Please see Lee Carey's comment below, which suggests that Deodato is actually drawing Doom as Vincent Cassel, which looks right to me now that it's been pointed out to me. Feel free to ignore the rest of this paragraph then!). This is so weird on so many levels; if you were for whatever reason determined to base all of your drawings of a fictional character on a particular actor instead of just drawing him in whatever way you think might be most fun to draw, or might best convey the spirit of the character or might best tell that story, and you could fan-cast anyone as Doctor Doom, why on earth would you choose the guy who played him poorly in the worst Fantastic Four movie ever made (yes, I did see the Roger Corman one), or that could conceivably have been made?

Worse still, in the second half of the volume, Tony Stark adopts a high-tech disguise that gives him a different head while he's going deep undercover, and Deodato chooses to draw him as Luke Perry, circa Beverly Hills, 90210. I don't know if that was meant to be a joke on Deodato's part (there are no moments where any of Tony's American friends say he looks vaguely familiar, or ask why he chose that particular face), but it sure is weird and frustrating to see Luke Perry's face traced into various panels.

(And I say that as maybe the biggest Luke Perry fan in what remains of the comics blogosphere; there is no one who would rather read a comic book about Luke Perry fighting ninjas with laser swords than I would.)

It boggles my mind that this stuff still happens, and that it happens in one of the major comic book publisher's premier books with its premier writers attached. I'm not a lawyer, but can Kebbel or Perry sue for having their likenesses appropriated like that? They should. Even if they don't personally care, even if they don't need or want the money, they should do so if only to discourage artist like Deodato and Greg Land (does he still do that? I gave up on him a long time ago) borrowing their likenesses to draw into comics.

(While we're on the subject, I have a question. Is it really easier to trace or draw particular actors from particular frames of particular TV shows or films into a comic book panel? To do it right, it seems like you would have to spend a hell of a lot of time searching for the right images to parrot for a particular panel. Even if you keep pretty extensive files of reference material, down to "Toby Kebbel smiling" or "Luke Perry raising his eyebrows quizzically," I can't imagine the amount of work saved by not just drawing characters' freehand to suit the panel is worth what goes into the research. Now, to do it wrong, as Land used to do, you don't even bother with a consistent source of inspiration, but draw characters as different actors, professional wrestlers or models from panel to panel. I haven't seen his work in a long time, so I don't know if he still does that or not, but he didn't even bother "casting" real people into his art as particular characters, but seemed to simply change the reference material from panel to panel based on the pose he wanted.)

As for the story of the six issues collected herein, Tony Stark is still interested in figuring out what the hell Madame Masque was up to in the previous volume, and just what is up with those ninjas with the laser katanas. Rather than investigating a break-in that occurred at a Stark facility in Japan personally, he sends his pal Rhodey to scope it out for him for...reasons. There's no real logical reason to delegate the task provided in the book, but I suspect I know the real rationale, which is to remind readers that Rhodey exists and that he is pals with Tony Stark, given that they and their relationship apparently play a role in Civil War II (the text on the back of the collection makes repeated references to Civil War, alluding to the fact that this somehow sets the stage for the series, although it's not terribly clear how any of this plotting will lead to that conflict).

When Rhodey gets in trouble, Iron Man and Spider-Man Peter Parker investigate, and also get in trouble. Stark's answer is to fake his own death, disguise himself as an ex-SHIELD agent that looks exactly like a young Luke Perry and then try to infiltrate the ninjas-with-laser-swords organization. Meanwhile, artificial intelligence girl friday Friday and his reluctant recruit Mary Jane Watson try to keep his company afloat while his board of directors thinks he's dead. Finally  Rhodey has enough of Tony's spy game, and he  brings the All-New, All-Different Avengers and SHIELD in to help extract Tony...against his will.

I liked this panel: 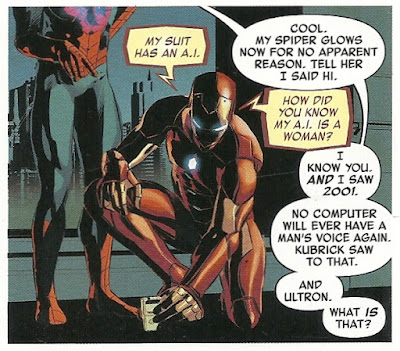 I guess Bendis doesn't get the glowing spider-symbol, either. So we totally agree on that.

But Bendis, man, quit running around with this Deodato character, and maybe give a little thought to how the comics you write look, issue to issue and collection to collection, huh?

This collection is also notable for introducing Riri Williams, the 15-year-old girl who is going to become the new "Iron Man"...under a less male codename, of course.  She only gets three scenes spanning about seven pages, and so far hasn't connected to Tony or the wider plot at all yet. She's just a young girl who builds a flying suit of super-armor that looks a bit like a homemade Optimus Prime and decides to try her hand at being a superhero, since she's about to get kicked out of M.I.T. anyway.

I imagine we'll be seeing a lot more of her in the near future.
Posted by Caleb at 10:00 AM

Much as I hate to correct you(and while there's a possibility that Toby Kessell may be the source for some reference, the main source of Deodato's Dr Doom is Vincent Cassel, who appeared in Ocean's 12 and 13 and many a French movie and used to be married to Monica Bellucci.

I'm in two minds about extensive photo reference for characters. I have fond memories of Paul Gulacy using Bruce Lee, Sean Connery and Marlon Brando in Master of Kung Fu, and it does give a distinctive voice to the way you read the character. Ditto for Sting as Bissette and Totleben's original design for John Constantine (and making sense characterwise when Brimstone and Treacle is taken into consideration for his original origin).

But Deodato's style seems to pull you out of the story (it definitely did so for me when he used Tommy Lee Jones for Norman Osborne a few years back) so I suppose, as with most things, it's not so much the practice of using specific actors and more the way it is done.

I've read a few issues of Greg Land's ongoing run with Cullen Bunn on "Uncanny X-Men." He has improved fairly dramatically since he drew "Ultimate Fantastic Four" and when he drew Matt Fraction's run of X-Men. His work is no longer unbearably ugly and is now more along the lines of "unremarkably mediocre."

His characters are easier to tell apart (I remember one thing I hated about his run with Fraction was that Emma Frost and Magik looked exactly the same), but I think that's partly because they all have very different hair colors, skin colors, and costumes (I kind of wonder if Bunn and Land picked this lineup with that in mind, in order to play to Land's weakness).

TLDR, Land is now doing the bare minimum we expect of a comic artist. Which is way more than he was doing before.