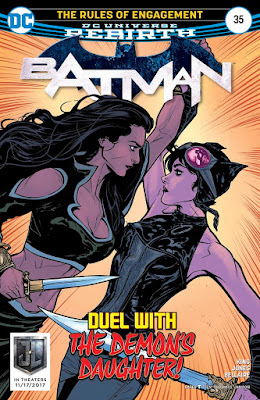 Batman #35 (DC Comics) This issue concludes the recently engaged Batman and Catwoman's meeting with Talia al Ghul, and consists mostly of a scimitar fight between the two women, while they compare their backgrounds and their differing views of Batman, who gets remarkably little panel-time in his own book. Meanwhile, Dick Grayson and Damian Wayne talk the engagement over, trying to guess at Batman's motivations.

As per usual, Tom King does some pretty great character work, and while the speeches they give may seem a somewhat artificial way of handling characterization, it's pretty effective.

Joelle Jones continues to handle the art, and while visually it's as good or better-looking than it has been at any other point in the previous 34 issues, the fight choreography left a lot to be desired. A reader has to fill in the blanks between panels to make sense of it.

And this may be nitpicking, but how in the world did Catwoman learn to sword-fight well enough to best Talia? She barely even fights dirty, tripping her once. Maybe. (I couldn't tell because the art wasn't terribly clear as to what happened in that sequence). I also found myself wondering what Denny O'Neil might think of Talia saying her father repeatedly resurrected her in the Lazarus Pits--those things sure have grown in effectiveness and usage over the years--and why Holly ever did what she did. It seems like a pretty big event to have happened off-panel, but then, I suppose it could have occurred in Catwoman or some other comic I didn't read... 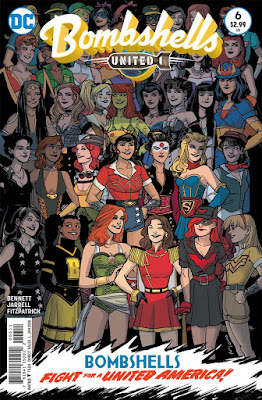 Bombshells United #6 (DC) Artist Sandy Jarrell joins regular writer Marguerite Bennett for "World Tour," an issue-length exploration of the sprawling cast of DC's Bombshells-iverse, almost all of whom make an appearance of some kind, even if in many of those cases the appearance is little more than a one-page cameo. New characters Black Canary, Bumblebee, Katana, Star Sapphire and Green Lantern are introduced in scenes, while a handful of others--The Flash, Starfire, Platinum, The Black Bat--get introduced in one-panel cameos. Meanwhile, Batwoman seems set on challenging what appears to be an evil, fascist version of Captain Marvel--a nice change of pace from all those evil, fascist versions of Superman we're forever getting!--and Wonder Woman eyes a very big space ship appearing out of the clouds. 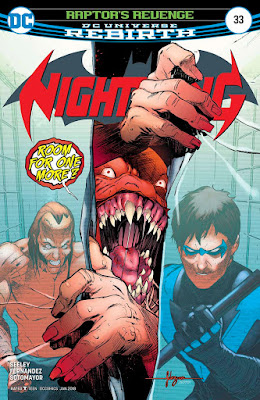 Nightwing #33 (DC) If I'm reading this issue right, this is the penultimate one of Tim Seele's long and healthy run on both the Nightwing title and the Dick Grayson character. The plot itself is maybe not terribly interesting in and of itself--Nightwing and Blockbuster fight off a crowd of Blockbuster-ed victims, including Tiger Shark, while Raptor and The Pigeon launch a spectacularly goofy plot to destroy the city of Bludhaven--but in context, it certainly works as a culmination of all the work Seeley has done on the title so far.

Seeley has a very good grasp of the character, and has done a fine job of telling stories featuring him over the course of the last 30-odd issues, even if the book never transcends its genre.
Posted by Caleb at 6:49 PM