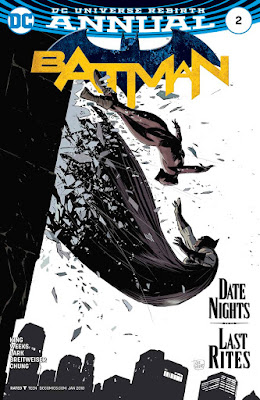 Batman Annual #2 (DC Comics) Regular Batman writer Tom King is joined by a pair of above-par artists for this 38-page issue tying into his ongoing Batman-and-Catwoman-are-getting-married plot line. Lee Weeks, who collaborated on that super-weird Batman/Elmer Fudd Special, draws the bulk of this issue, with Michael Lark drawing the remainder (You know what's also weird? The bar and one of the characters from the Looney Tunes crossover show up briefly in this issue). Although the two segments are presented as a single story, they are pretty neatly divided into two completely different time periods...and maybe even dimensions/realities/continuitiverses.

The 30-page Weeks section is set "Near The beginning," and features Catwoman repeatedly breaking into the Batcave and Wayne Manor to get a rise out of Batman/Bruce Wayne, whose identity she seems to have sussed out almost immediately (this is in sharp contrast to the post-Flashpoint New 52 continuity, but increasingly DC seems to be pretending that the majority of the comics published between, say, 2011-2013 were never actually published. It fits in pretty well with King's ongoing narrative regarding the two characters' relationship, and Weeks' art is so far above the bulk of what DC publishes that it seems petty to even criticize the few weak points--like that panel where Catwoman looks like she jumped a half mile out of a window, for example.

I do wish Elizabeth Breitweiser's coloring was a little more clear, however, as I had trouble telling if Catwoman was wearing gray or purple or alternating costumes throughout the story. Or am I color-blind...?

The last eight pages, drawn by Lark and colored by June Chung, are just plain weird. This passage is set "later," and features elderly, gray-haired versions of Bruce Wayne and Selina Kyle, as Bruce is diagnosed with some kind of chronic illness, and slowly sips towards death. The presence of their grown daughter Helena, a black-haired lady wearing a Batwoman costume, and Bruce's reference to an Earth out there where he "never got old...or married, or sick or anything," are pretty slap-in-the-face clear that this is an (original) Earth-2 story...or at least King's possible-future-that-will-never-come-to-pass that alludes to the original conception of Earth-2. Whatever; it's weird as hell. Nice to see some Lark art in a Batman-related comic book again, though! 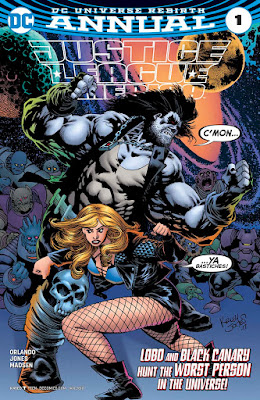 The over-sized issue stars just two of the current JLoA line-up, the pair you see on the cover. One is Lobo, whose ridiculous, over-the-top nature makes him a practically ideal subject for Jones' particular, peculiarly expressionist style (as he proved recently with the Lobo/Road Runner Special #1). The other is Black Canary, who, as a beautiful woman, isn't the sort of character that fits all that easily in Jones' style. But, as you can see from the cover, he does a remarkably good job on Canary, with only a few panels finding her drawn overly abstracted, or in a form of exaggeration that feels particularly off (Jones does seem to struggle with the tight, black booty shorts of her post-Rebirth redesign, however, as he draws them quite baggy and ill-fitting).

The plot deals with Lobo cashing in a particular favor that Batman has been using to entice him to work with the League: The location of the space dolphin home world. He has an old enemy who has been hunting the dolphins there, and, now that he finally has the location he's headed there to, well, frag them. But he can't do it alone, and so he convinces the Canary to come with. It is, therefore, essentially an extremely unlikely Lobo/Black Canary team-up, for the fate of the only thing Lobo seems to truly care about.

The villain's final fate is gorier still, but in keeping with the "worse than death" non-deaths of many League foes, Lobo and Canary don't outright kill-kill him, although if given the choice, you might prefer an outright death-death over what befalls him.

Orlando continues to try and find depths to Lobo that aren't readily apparent--and, perhaps, shouldn't be there at all--but it's worth noting that he mostly pulls it off in this issue, and that Jones similarly manages the difficult aspects of the script, like a few pages of conversation between the leads here and there.

The alien environments--deep space, a wormhole through space, the dolphin homeworld and the bad guy's ship and technology--offers plenty of strange, extreme stuff for Jones to draw. Over all, it's a pretty fun issue, although if you don't like either Jones or Lobo--both of which can be acquired tastes--than it probably won't sell you on either of those things.


I read two other new comics that were released this week, but don't qualify for this column. The first was the new Mystik U by Alisa Kwitney and Mike Norton, which I found to be surprisingly good. Like, there's probably no regular reader of DC Comics who is as hard-to-please as I am, but I genuinely liked this, and thought they did a good job of introducing a rather radical new concept with several pre-existing magical characters while simultaneously grounding the new concept within current continuity (or a current continuity? The DC Universe' cosmology and history are pretty fucking messy. right now).

The other was this year's edition of DC's New Talent Showcase, which I'd like to devote a whole post to, as I did last year. In the mean time, I can say that I think it was all around much better than last year's, and it was never the slog to get through that last year's was at times.
Posted by Caleb at 1:38 PM