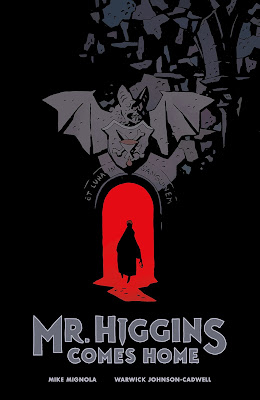 Whoever wrote the solicitation copy for Mr. Higgins Comes Home, Mike Mignola and Warwick Johnson-Cadwell's new original graphic novel, sure knew what they were doing. Said copy calls the book a "send-up of classic vampire stories...as outlandish as The Amazing Screw-On Head," comparing this work of Mignola's to his 2002 one-shot was enough to convince me to pick up this $14.99/50-page hardcover. After all, The Amazing Screw-On Head was an amazing comic.

I did not regret doing so.

The particular classic vampire stories, according to Mignola himself on the title page, are those from Hammer Films and, most noticeably, Roman Polanski's  1967 The Fearless Vampire Killers (on Mignola's recommendation, I checked it out; I wasn't as impressed as he was). The influence of Polanski's comedy will likely seem pretty obvious if it is as fresh in your mind as it was in mine upon reading this--I watched the movie one night and read the comic the next night--although Mr. Higgins is more inspired by The Fearless Vampire Killers then derivative of it.

Like the film, the graphic novel features among its protagonists an older, mustachioed professor character devoted to the study of and eradication of vampires and his younger assistant. There is a ball of the undead not unlike that at the climax of the film. And artist Warwick Johnson-Cadwell's artwork seems to have based the layout of Castle Golga's courtyard and crypt on those seen in the film.

The other similarities are mostly related to tone and spirit, although I actually found Mr. Higgins much funnier. It moves at a very quick clip, and the sincerity of Mignola's horror work makes for particularly effective humor, when he so indulges in it (In that respect, if he had drawn the book himself, I can't help but wonder if it might have had a more deadpan type of humor to it; note the cover, which is the only part of the book Mignola drew himself, is indistinguishable from any of his other, serious horror work).

A long time ago in a village between the Carpathian Mountains and the Black Sea, Professor J. T. Meinhardt of Ingolstadt University and his assistant Mr. Knox--a very big, very bald tough-looking guy with a funny-shaped head who couldn't contrast more with Polanski's Alfred--are on their way to Castle Golga in an attempt to rid the world of Count Golga. Their plan is to pick up a secret weapon, one Albert Higgins. Higgins is a werewolf who lived in the Golgas thrall for a time, and who can show them how to enter the crypt in exchange for them killing him (He hasn't been able to figure out how to do so himself). In an attempt to turn the tables, Count Golga invites the three of them to his Walpurgis Night celebration as guests, where he and his fellow ghouls worship the devil; and he won't have to worry about them sneaking around the grounds to do him in if they are on the guest list.

Things go sideways for almost all involved, and though our trio of protagonists all survive and the vampires all die, none of it goes quite according to anyone's plan. Except maybe Satan's.

There's a great bit of deus ex machina--or, perhaps more precisely, diabolus ex machina--that allows for the professor and Mr. Knox to credibly escape relatively unscathed and the would-be devil-worshiping vampires to get what is coming to them.

Mignola's artwork has such a distinct visual style that it is sometimes difficult to read a Mignola comic that is only half a Mignola comic, although regular readers of his somewhat sprawling in scale Hellboy comics should at this point be used to Mignola-written comics not drawn by Mignola himself.

As much as I would have welcomed Mignola art within, Johnson-Cadwell does a brilliant job of it. His artwork is very loose, very exaggerated and rather cartoony, and helps sell the humor. His character designs all look funny, so even though the proceedings might not at first present themselves as, say, comedic, the presence of professor or Mr. Knox might be all we really need to remind us how seriously to take things. 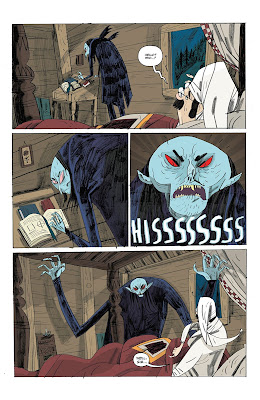 I really liked how full and cluttered with detail all of the "sets" of the book were, from the rustic cabin our heroes stay at in the first scene to the occult tchotchke-filled halls of Castle Golga, and the exaggerated proportions of the monsters. The first vampire the professor encounters has enormous arms that fill his entire room (above). The werewolf looks as big as a house, and seems to grow in proportion to the violence it commits. The vampires are all purple and blue-colored, suggesting Sesame Street's Count. Satan appears as a weird-eyed black goat and, later, as a gentleman of an extremely goat-like countenance.

It's a very fun book, filled with familiar horror movie tropes jumbled into new form that strikes just the right balance between silly and spooky. It's a very delicate balancing act of tone, but Mignola and Johnson-Cadwell pull it off.

It's not really as outlandish as The Amazing Screw-On Head, but then, few comics actually are. And I can't actually begrudge Dark Horse for selling it as such, given that doing so certainly did the job of selling the comic to me.
Posted by Caleb at 6:59 PM