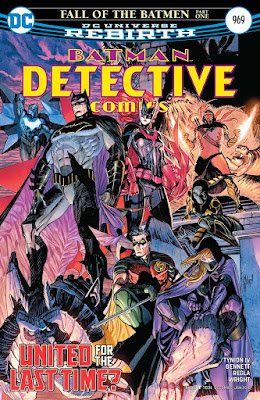 Detective Comics #969 (DC Comics) I'm a big fan of artist Guillem March's work, which is something I have likely said on this blog four or five thousand times before, so I was happy to see his cover here, showing the entire "Gotham Knights" team assembled next to one of the big, crazy gargoyles he seems to favor drawing (Too bad it's obscured by the unnecessary tag line, "United For The Last Time?"). I do so wish he was a regular artist on one of the Bat-titles.

This is the first issue of what feels like it could be the last story arc of writer James Tynion's run on the title, or at least the beginning of the last portion of his run, given the way in which it seems to be ramping up towards a summation of the run so far (Also, ever since they announced that Brian Michael Bendis would be joining DC, I just sort of assumed he would be taking over some Bat-titles, perhaps, given the pace at which he pumps out comics, both Batman and Detective. This is, of course, just an assumption on my part, but Batman is both the biggest franchise DC would have to attract him, and seems to fit within his area of interest, at least in terms of the crime sub-genre).

It is definitely my second-to-last issue of the series. As I've said before, buying a mediocre comic I only sort of half-like and then complaining about it on the Internet every other week makes me feel like a bit of an asshole. I'll catch up in library trade, eventually.

The issue is divided almost in half, with the first half focusing mostly on Stephanie Brown. She goes to visit Anarky Lonnie Manchin in Arkham Asylum--not sure why they're keeping him there of all places, but whatever--and then reunites with the back-from-the-dead Red Robin Tim Drake. From there, the narrative jumps ahead three weeks, and we see Red Robin's plan to use the 'Tec team--which he calls The Gotham Knights, a good name for a team that was unfortunately already used for various Gotham sporting teams over the years--to eradicate organized crime and super-crime in Gotham City.

Then Killer Moth--wearing a version of his original costume, rather than the odd gas mask he's been wearing since Flashpoint--comes up with a new version of his Batman-but-for-criminals racket, this one employing a team of super-villains, just as Batman and Red Robin have been using a team of vigilantes (the make-up of said team is pretty random and not particularly threatening, including as it does Mr. Zsasz, Firefly and The Ratcatcher, back in his old, Norm Breyfogle-designed costume rather than the dumb-looking one from Batman Eternal), which intentionally or not echoes a kernel of the plot from Alan Grant's "The Misfits" story arc from Shadow of The Bat.

Before the end, we see that Anarky is joining forces with The Victim Syndicate, one of the secret societies that Tyinon has been throwing at The Bats. 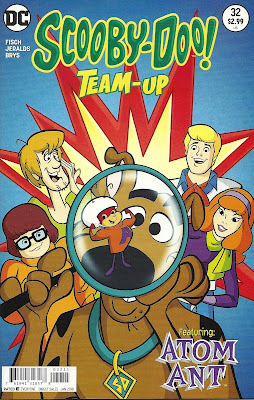 Scooby-Doo Team-Up #32 (DC) Disclaimer: I am not an Atom Ant fan and, racking my brain, I don't actually have any memory of every having watched an Atom Ant cartoon, although it's quite possible I did. Therefore, this particular pairing doesn't really do anything for me personally, but regular writer Sholly Fisch and guest artist Scott Jeralds to a fine job of telling a story involving Scooby and the gang and a superhero who is also an ant.

This seems to be more of an Atom Ant story than a Scooby one--there's no real mystery to solve, and the monsters involved are actual monsters drawn in a style that is more likely Atom Ant's. It is, like almost every single issue of the series so far, professionally made and of a decent enough quality that anyone who can read should be able to wring some enjoyment out of it. 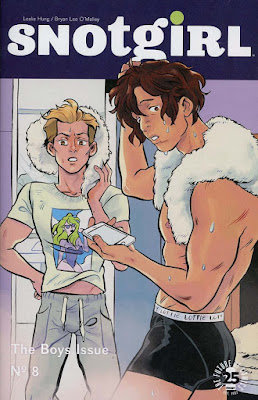 Snotgirl #8 (Image Comics) "The Boy Issue" focuses on the, well, the boys: Lottie's ex Sunny, Lottie's friend's horndog fiancee Ashley, fashionista-turned-police-detective John Cho and and Lottie's other friend's brother Virgil, who is here creepy as hell. Perhaps because of how self-contained it is, this issue struck me as one of the stronger and funnier ones.

While Ashley and Sunny intentionally--if reluctantly--hang out at a health club in this issue, the other character's cross their paths in what seems like it may or may not be coincidence. There is a lot of locker room talk, and some pretty good penis jokes. I may not be able to watch an episode of Power Rangers for some time without thinking of dicks, thanks to this issue.

Artist Leslie Hung does her usual incredible job on the art work, which spends a lot of time on something one rarely sees in comics: Genuinely hot guys, drawn hotly. Even in the manga I've read that has been devoted to boy-on-boy relationships, the depiction of those boys seems to be more pretty or cute than, well, all muscley and hunky, as it is here.

Lottie shows up for a key scene or two, but she seems confined to her house with allergies, so this is a Snotgirl comic in the fact that it shows the way so many other characters think about and talk about her.

If you haven't tried the series out yet, this might be a good one to sample. Sure, the storyline is a decent way along, but this is a kinda sorta done-in-one that gives a reader the flavor of the book and a decent sketch of the main character.
Posted by Caleb at 12:18 PM