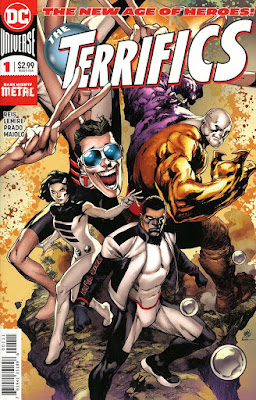 *As with Sideways, I didn't read this one. That, however wasn't because of the creators, who are all decent enough at their jobs, or the characters, three of whom I really like, and the fourth of whom I barely know. No, it was that last page, in which Alan Moore and Chris Sprouse's 1999 creation Tom Strong, a pulp hero pastiche that starred in a title for Moore's America's Best Comics line at the pre-DC WildStorm, makes his completely unnecessary appearance. I've talked about this so much already that I'm sure no one wants to read me talking about it again, certainly not any more than I want to talk about it again. But I just can't bring myself to support trying-to-annoy-Alan Moore-just-for-the-sake-of-annoying-Alan Moore as a publishing strategy. Seriously, that is it. That's the sole reason to put Tom Strong in a new DC comic book in 2018.

It's not because DC anticipates a huge sales boost or anything, as they might with importing his Watchmen characters into their latest continuity cleaning event series Doomsday Clock. In 2013, Sprouse and writer Peter Hogan launched the second of their Moore-less Tom Strong miniseries, Tom Strong and The Planet of Peril, under the umbrella of the wilting Vertigo imprint. I think it's safe to say that if you added every single person who bought a copy of all six issues of that miniseries to the, what, 40,000 or so who might buy a copy of the Terrifics, you're still not going to see the sales needle move in any appreciable way. Certainly not any more than if you had Mister Terrific and company team-up with Grifter or He-Man or Huckleberry Hound or Yosemite Sam or the cast of Camelot 3000 or Jack from Dan Brereton's Giant Killer.

So I honestly can't think of a reason DC is so committed to getting all their Moore-created IP into the DCU in the wake of their weird Watchmen crossover. One would think that the market's more or less complete and total rejection of the WildStorm characters being added into the DC Universe during the New 52 initiative might have sent them the message that there's not much of an audience for non-DC comics characters in the DC Universe. Beyond it basically just being a dick move, and one more instance of doing whatever little thing they can to try to get irritate Alan Moore, I can't figure out why they are doing it, and I'm honestly trying here. Anyway, as I've said before, I'm done with Jeff Lemire and Steve Orlando (who wrote Promethea into Justice League of America) for signing their names to this sort of thing; both should know better, and neither should be financially desperate enough to have no choice other than to take such directives.

*This book is unlike all the others in the "New Age of Heroes" line of Metal spin-offs in two ways. First, of those four so far released, it looks to be the one most directly tied to the events of Metal, as Mister Terrific and Plastic Man have been appearing through the Metal event series. Second, and perhaps more dramatically, it neither features original characters (like The Silencer and Sideways) nor new versions of preexisting characters (Damage, The Challengers of The Unknown and Curse of Brimstone), but is rather a teaming of four exceptionally long-lived characters into an original arrangement as a new team.

*So let's see, that makes two of the first four of DC's "New Age of Heroes" books that I couldn't bring myself to read. They're not off to a great start. That, or I am most definitely not the target audience for DC Comics after all.

Not sure I agree with you about the use of Tom Strong. My understanding is that Moore does not own the rights to the character or supporting characters from that title. That being the case, it isn't much different than using, say, The Creeper in a Superman comic. Sure, The Creeper was created by Steve Ditko but he doesn't own the rights. DC does. Should comic companies not publish new stories about any old characters because they were created by someone else? It's a shame that use of 'his' characters gets Mr. Moore's knickers in a twist, but in this case, I don't think he has much real cause.

Beides, we're in a time, when any and all comic characters are potential intellectual property that could be made into high budget films. I'm sure that using Tom Strong has much more to do with getting a potential film character in front of the public, as well Jeff Lemire having a fondness for the Tom strong cast (he's stated in interviews that he does) and wanting to write them.

Of course, your mileage may differ on this issue, and that's okay, too.

What's that quote about "never attribute to malice that which is adequately explained by stupidity" — Sean makes good points above, all of which I can see as valid. I'm also way too willing to believe that DC is just so out of touch with their market that when somebody there says "you know why comics sales are slumping? They all want more Tom Strong!" that nobody questions it.

I still don't understand why Moore didn't make sure Tom Strong was his intellectual property from the start when he created him.