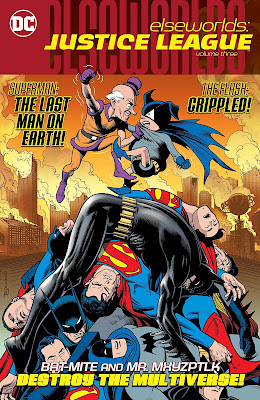 Technically only one of the five 1999-2001 comics stories collected in Elseworlds: Justice League Vol. 3 is branded as a Justice League story—that would be 2000's JLA: Created Equal—so DC seems to be rather generous with what it's considering a Justice League story.
Two of the stories here are Elseworlds comics featuring long-time Justice League members (1999's Flashpoint, 2001's Green Lantern: 1001 Emerald Nights), another features an alternate DC Universe in general (1999's Conjurors) and the final one examines DC Comics itself as a milieu (2000's Batman and Superman: World's Funnest). One assumes, then, that there just weren't enough, say, Flash and Green Lantern Elseworlds to make up their own trade collections, or perhaps the words "Justice League" in the title were deemed of greater sales potential than anything else they might have called this.

The crown jewel in this collection is the Evan Dorkin-written World's Funnest, which was re-released in 2016. Originally a prestige format one-shot, the book opened with an 18-page section drawn by Dave Gibbons set in the Silver Age, as Mr. Mxyzptlk and Bat-Mite intervene at the conclusion of a World's Finest team-up. The imps cause their usual trouble, but things take a dark turn when Mxy threatens to kill Bat-Mite and Batman ends up walking into the line of fire.

The Dark Knight is dead, and things spiral out of control quickly, with Bat-Mite killing Superman in retaliation and then pretty much the whole Silver Age gets slaughtered in short order. When the two have succeeded in wiping out the entire universe, and are left floating in a white void, Bat-Mite decides to run for it, with Mxy in hot pursuit.

From there it becomes a jam issue, with a different great and/or popular (usually both) artists drawing each new locale, a page or two at a time. What follows is a race through the old Multiverse (Earth-2, Earth-3, Earth-X, Earth-S, Earth-C) and into various other stories (The Dark Knight Returns, Kingdom Come, Crisis On Infinite Earths), mass media adaptations (the Super Friends cartoon, storyboards for The Animated Series versions of the characters) and even the real world, where Stephen DeStefano draws imps over photos.

Adding to the fun is that the ideal candidates are generally chosen for each locale, so that, for example, Alex Ross paints the three pages set during Kingdom Come, Frank Miller the three set during Dark Knight Returns, Scott Shaw draws the visit to Earth-C and so on. It's a real who's who. It blew my mind when I read it originally, and it seems even more impressive now that I know who each and every one of the contributors are, and am familiar with all of the various DC Multiversal locales.

As much fun as it is seeing Dorkin and company go at all of DC's most sacred, money-making cows, perhaps the sharpest bit is a four-page sequence set in the "real" DC Universe of 2000, as drawn by Doug Mahnke and Norm Rapmund. Bat-Mite s quickly reduced to tears b what he sees: "Nobody knows me in this icky universe! M-maybe they're all super-villains like on Earth-3....why else would they look and act that way?"

Particularly interesting to revisit in 2021 is writer Fabian Nicieza's JLA: Created Equal, a two-part series with a premise very similar to one put to greater use a few years later in Brian K. Vaughan's 2002 Y: The Last Man ongoing series for DC: A cosmic storm passes Earth, and its radiation somehow kills every single male human being (and alien) on Earth. The only exceptions are Superman, whose Kryptonian DNA seemed to make him invulnerable in a way that J'onn J'onnz's Martian DNA did not, and Lex Luthor, who took the precaution of sealing himself in a super-suit before the storm hit.

The story is only 96-pages long, so it is perhaps unfair to compare it with Vaughan and artist Pia Guerra much more expansive Y, but the fact that the same fantastical premise is used by the same publisher twice in such close proximity begs a certain degree of comparing and contrasting. Perhaps the most immediate similarity between the two is that male-written comics are all about men; Y follows the last-ish surviving man Yorick, while the focus of Created Equal remains squarely on Superman and, in the second half, Luthor.

After some trials and tribulations for society, things work out pretty well, all things considered. DC has more than enough female superheroes and supervillains that a whole DC line of comics set in this weird milieu would have no problem carrying on, but while society is remade off-panel in the comic, the focus is on Superman and Luthor fathering a new generation of male children (the former mostly through artificial insemination, the latter through cloning) and warring philosophies of Superman and the Amazons, who have remade the world with a New World Order  (they actually call it that, too) and Luthor, who wants to continue capitalism for some poorly expressed reasons (his sexism is particularly cartoonish near the climax, where he's one of the few people with a Y chromosome left on planet Earth).

Someone could, and perhaps should, write a long essay comparing the worlds of Y: The Last Man and JLA: Created Equal, but I'm not that person; I read the former too long ago. On the other hand, while Y was getting some reexamination thanks to the television adaptation, I understand it's already been canceled, so perhaps there is no point in that anyway.

Part of me wishes that Nicieza  had more space to tell a story, as the DC universe is so big and weird that such a change has dozens of avenues to explore, some of which are barely touched on (Swamp Thing, a male, makes a rare pre-Brightest Day appearance in a DCU comic, for example), but then little interesting happens with the space he was allotted, some of it rather embarrassing, like Wonder Woman all but begging Superman to impregnate her the second he's done using his heat-vision to etch Batman's grave stone ("The Fall", as the death of mankind is called, all happens between panels).

The remaining three stories in the collection are mostly of interest for their art, I think.

The Chuck Dixon-written Conjurors is drawn by Eduardo Barreto, who redesigns the many minor DC characters it stars, some of them quite dramatically (Like the much scarier version of Stanley's monster, from Stanley and His Monster, for example). It imagines a DC Universe in which not only is magic real, but it is much more prevalent than it usually is, to the point where science is frowned upon.

The premise is somewhat confused, and Dixon doesn't follow through with it in a particularly even way. In one scene Ted Kord, who keeps filing patents for various scientific advancements, is shown laboring over the designs for a helicopter, which he then rips up when he sees a man with a magic wand flying by his window. Meanwhile, there are airplanes, and they figure rather prominently in the plotting of the story.

That story involves "The Father of Magic," The Phantom Stranger, who stole magic from an alternate universe of Lovecraftian gods in prehistoric times, eventually founding a tribe of magic-users that today accounts for ten percent of the population. This DCU is devoid of the heroes of the normal DCU, but various magical and magic-adjacent heroes fill its pages: Warlord's Jennifer Morgan, Brother Power, Deadman, Klarion the Witch Boy, Madame Xandadu and, somewhat oddly, The Challengers of the Unknown.

I'm curious if Zatana was off-limis to Dixon for some reason, as the version of Jennifer Morgan that appears in here seems to be written as Zatanna in an earlier draft, her name, hair color and way of doing magic re-written at some point.

It's an interesting-enough alternate history, but it mainly seems to exist as a way to keep some pretty obscure DC characters in usage, and, again, as a showcase for Baretto's artwork.

Flashpoint is also a bit of alternate history, although it is of perhaps greatest interest because Geoff Johns recycled the title for his big 2011 crossover story, the one that ultimately ushered in the New 52 and a decade of extremely confusing continuity at DC.

In this Flashpoint, written by Pat McGreal and drawn by Norm Breyfogle, Flash Barry Allen was the only superhero, but he lost the use of his body when he was struck by the "magic bullet" that was fired at President John F. Kennedy in 1963. Barry Allen foiled the assassination attempt—and JFK is still president as the millennium turns—but the super-fast superhero is now bound to a wheelchair. His mind still works at super-speed though, and so he lives on a space station and devotes himself to super-science with the input of his friend, Vandal Savage.

The story involves private investigator Ralph Dibny, a manhunter from Mars after an artifact that can summon the speed force, and glimpses to an alternate timeline where Allen is friends with the Martian and there are other colorfully-costumed heroes.

I was, as I said, mainly interested in it for Breyfogle's' art work. He's so associated with Batman that it is always interesting to see him tackle different heroes and settings other than Gotham City, and while there's less super-heroics in this than in many superhero comics, his highly-expressive and dynamic art style is a great fit for The Flash.

The final story in the collection is Green Lantern: 1001 Emerald Nights, by writer Terry LoBan and artist Rebeca Guay, two creators I am unfamiliar with. It is, exactly as it sounds, something of a mash-up between the Green Lantern franchise and 1001 Nights.

Here Prince Ibn Rayner is the sultan who spends each night with a different girl, only to have her killed the next morning—but, being a good guy, it is actually his wicked vizier responsible for the scheme. Kyle, er, Ibn is ignorant of it. Scheherazade, who wields the power of the Green Lanterns, comes to assassinate him one night, until she realizes he's ignorant of what's being done in his name.

So she tells him stories with cliffhanger endings that prolong their nights together, stories starring a poor fisherman who finds a magic green lamp with a genie in it, a fisherman named Al Jhor Dan. After several adventures with his genie, who Guay paints to resemble Kilowog, Jhor Dan and Scheherazade have inspired Rayner to be a good ruler, and to stand up to and ultimately defeat his vizier.

It's a pretty weird smooshing together of two things that don't quite belong together, despite the similarities of a wish-granting genie and a wish-granting ring, and I'm actually kind of curious if the outdated orientalism of the proceedings proved offensive to anyone at the time of original release...although, I suppose, orientalism was pretty key to the Western 1001 Nights anyway, and there's a long, long tradition of a white washed Middle East present in previous adaptations of those stories.

Guay's fully-painted art is pretty extraordinary though, and, like every other story in this collection, is remarkable enough to justify the existence of the story.