The Justice League is a suprisingly touchy-feely organization

In Tom Peyer and Freddie Williams II's The Flash #239, the Justice League discuss whether or not they should talk to the Flash about the problems he's currently having with the media: 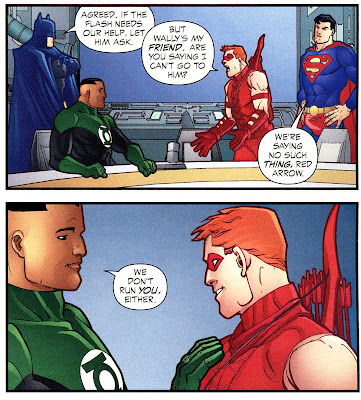 And unlike Superman and Batman (or Iron Man and Captain America), who have been working together for decades (and fighting to keep their deep love for one another to themselves), Stewart and Harper have only been working together for, like, 20 minutes (Harper just joined the JLA for the first time during "The Tornado's Path," and Stewart wasn't on the League then; he just rejoined it during the JLoA Wedding Special).

Fatherly hand on the shoulder? Okay, that's one thing. But open palm on the chest? Hmm, I don't know.

Even cooler than the bizarre demonstration of physical intimacy between these guys who are having, like, their fifth conversation ever is the the expression Williams gives Stewart. Behold the bedroom eyes of John Stewart: 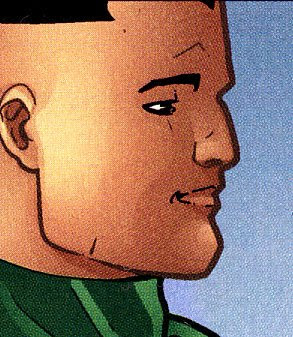 They accidentally left out Roy's thought balloon, which says that he's going to sue John for sexual harassment and retire young. Hence the smile.

Awww...John's just lonely. It's been a long time since Katma was offed. And you have to admit...Roy IS adorable.

Plus, hanging around Hal all the time DOES things to a man.

I'm terribly afraid of what the hands we can't see might be doing.

Well, that explains Roy's disappointment when Wally didn't stop to properly "thank" him for showing up and putting an end to the Flash family dispute.

And I'm 100% positive that's never occurred in my life with a co-worker, which is essentially what Stewart and Harper are.

Balderdash! That sounds like Meltzer talk. They're not really co-workers, and they all don't necessarily have to be "friends." They're teammates, like on a baseball team (it's the Justice LEAGUE, after all).

If you look at it that way, the physical contact is positively restrained; they're not even patting each other's asses.

BOTH of their faces make that panel priceless. Roy's clearly feeling a little bashful himself about John's physical presence!