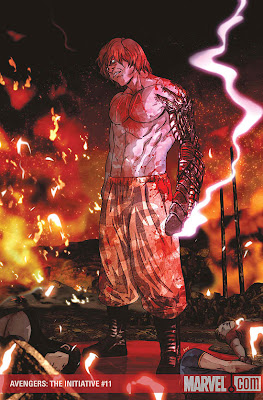 Avengers: The Initiative #11 (Marvel Comics) Given the reveal at the climax of Secret Invasion #1, telegraphed by the cover of an upcoming issue of this title, I was kind of surprised to crack this comic open and find that writers Dan Slott and Christos N. Gage were still dealing with the “Killed In Action” story and not something more…Skrully.

This issue is 22 pages of superheroes fighting, as the so-far unstoppable character K.I.A., a killer clone merged with an intelligent alien weapon, seeks to cross off a bunch of names on his “to kill” list. The Initiative kids, the old New Warriors, War Machine and Iron Man and a few of his Mighty Avengers all dog-pile on.

There’s not much to it, but what is there is very well done, and this book should easily meet or exceed anyone’s demands for Marvel super-combat and teen melodrama.

Batman Confidential #16 (DC Comics) Missed it! I completely forgot about this book, which actually shipped last week, while I was at the shop last Wednesday. That says something about the inessentiality of this low-stakes, low-drama tale of Batman and “Year One” Nightwing battling the protégé of one-off ‘80s Bat-villain The Wrath.

Rags Morales’ superior artwork is what’s held my interest throughout the arc, and it’s great here again—after that weird first page, in which the Batmobile seems oddly misshapen, anyway—and while Tony Bedard’s script won’t knock any socks off, it’s very competently executed. I particularly liked seeing Nightwing act like a hero, essentially defeating the villain with something other than violence, and the always welcome interaction of the original Batman and Robin (whatever codename the latter is going by).

Considering the relative rarity of good Nightwing stories, this story is a stand-out. And for God’s sake, someone please give Morales Batman, huh? 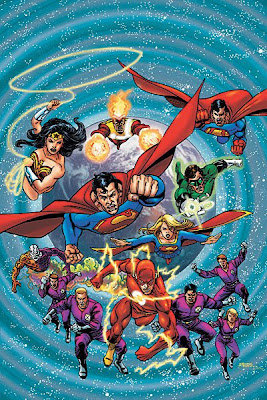 The Brave and the Bold #12 (DC) There’s been a lot of talk in the comics blogosphere about this series since the last issue, prompted by the fact that it’s plummeted down the sales charts from 90K. The concern strikes me as a little silly; right now, the book outsells about half of DC’s line instead of three-fourths of it. That’s hardly cause for hand-wringing.

The only thing that worries me about all this is that Brave and the Bold is one of DC’s best-illustrated, best-told comics, and the fact that Ed Benes’ JLoA is outselling it is a damn shame. I don’t expect sales to increase any in the foreseeable future, as half of the creative team has left to relaunch the Legion again.

Finishing up George Perez’s second story arc on the book is veteran artist Jerry Ordway, and his work looks a lot more Perez-like than usual here. I imagine sharing inker Bob Wiacek has a lot to do with it.

Plot-wise, the book reads more like a cross between Justice League and Who’s Who than a true team-up book, particularly in this final chapter of the six-part Megistus story, as chracters from throughout the last five issues all converge for a battle royale against a new villain.

So we’ve got Superman, Ultraman, Green Lantern Hal Jordan, Metamorpho, Firestorm II, Supergirl, Power Girl, Wonder Woman, The Flash, the Teen Titans and the Challengers of the Unknown vs. a super-alchemist with a base in the sun itself, which he has turned green as part of his plan to attack Earth with a red kryptonite cloud.

That’s about as many DC superheroes as you can get per panel in a comic without the word “Crisis” in the title, and they’re all well-written and nicely illustrated. I don’t think you can ask for much more than that from a DC superhero team-up title.

The Flash #239 (DC) I can’t stand the art in this book. I like artist Freddie E. Williams II’s linework just fine, but for some reason there are no blacks in the character outlines; the lines are the color of whatever color they’re outlining. For example, the lines that form the title character are red, guest-star Jay Garrick is outlined in red, blue and brown. It gives the characters a soft, slightly blurry and unfinished look that I fine personally really unappealing. It’s pretty distracting and made it hard for me to enjoy the good parts of the book. (The script, by Tom Peyer, is fine). This might just be me. I’m not saying the art is bad because of the idiosyncratic way it looks, but it’s definitely something I find unappealing. I like my comic books to look like they were drawn by hand using pen and ink, and these panels look more like cels from a shoddily animated cartoon.

Confidential to Roy Rammond Jr: Shame on you; your father would be so disappointed. 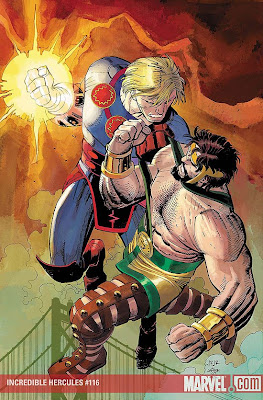 The Incredible Hercules #116 (Marvel) Remember exactly what happened during Neil Gaiman and John Romita Jr.’s long, slowly paced miniseries The Eternals? Yeah, me neithere. Hell, even the characters themselves seem a little shaky on it, and seem to have been left a bit brain-damaged by the whole experience.

Since we last left Hercules, Amadeus Cho and the goddess Athena, they driven across the country, an epic journey recounted on this recap page.

They’re going there for a meeting with some other divine types regarding a big Marvel crossover (Next issue kicks off a story arc entitled “Sacred Invasion”) in the shadow of that giant Celestial that’s been standing there since Gaiman’s series. But first, Thena and Ikaris attack Hercules, trying to beat him into remembering that he’s really Gilgamesh. Or course he’s not, but his own memory’s a little hazy: “Look, when you get knocked in the head every day for two or three thousand years…” he explains.

More Marvel mythology mash-up, just the way you like it, True Believers!

Er, sorry, I got a little enthusiastic there.

Robin #173 (DC) Tim changed his name from Drake to Wayne when Bruce adopted him? That doesn’t sound like something Tim would do.

Oh, and I guess Spoiler’s back from the dead. Or never really died. Or something. We’ll find out for sure next month. 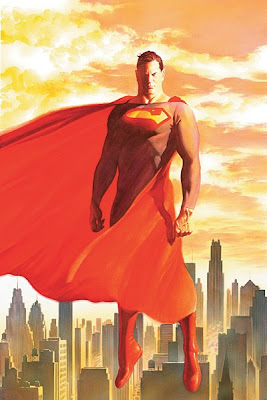 Superman #675 (DC) And so Kurt Busiek’s run on Superman comes to an end…sorta. Busiek’s leaving the title to make room on his plate for the weekly Trinity series, which also stars Superman, so, in a way, I guess he’s quitting this title to write four times as many Superman titles.

That being the case, I’m not as bummed about his run being as I normally would. I don’t necessarily like everything that’s happened to the franchise of late—particularly the addition of Chris Kent—but Busiek’s made it all work pretty well, and even the worst issues since the “One Year Later” new direction have been pretty solid.

I really like the way Busiek handle’s the Man of Steel, playing his power’s up to their max, but still finding significant challenges for Superman and often creating conflicts for our hero by having him seek thoughtful and peaceful solutions instead of taking the easy way out.

In this over-sized issue, for example, Superman is confronted with a trio of Daxamites (all of whom have his powers on Earth), the villain Paragon (who siphon and increases the powers of those nearby) and the Galactic Golem. There’s a whole lot of punching, and Supes keeps trying to talk his way out of it. He and Paragon have a pretty good chemistry and, now that he has a less terrible costume, I’d kinda like to see more of him. Super-smart and super-strong, he’s a good foil for Superman, and his personality makes him an interesting character to share conversations with the title’s hero (I loved the manipulation scene).

After a one-issue fill-in, new writer James Robinson takes over the reins of the title. I’m a bit apprehensive about how he’ll do. Robinson’s obviously done some great superhero work in the past—actually, some of the best superhero work—but always with minor characters that give him a lot of latitude. Superman is a flagship franchise, one that presumably has a lot less flexibility than, say, Starman or the JSA. And Busiek has made sure Robinson will have a tough act to follow.
Posted by Caleb at 1:15 PM

“Look, when you get knocked in the head every day for two or three thousand years…”

What a great line!

For all of his artistic gifts, Rags Morales is a terrible drawer of cars. I first noticed this failing in last month's issue. Truly terrible. It makes you realize just why most artists just photoshop stuff like that.

Not a huge week for me, but some gems were in there, certainly. I loved the Brave & the Bold, with Hal getting impatient with his oath, and Superman using his head instead of just his fists.

I feel so sorry for Wally right now. But it is always nice to see Jay, whom I adore.

The Incredible Hercules just keeps getting better and better. This issue in particular was hilarious.