Oh yeah hey, comics used to be kind of insane, didn't they? 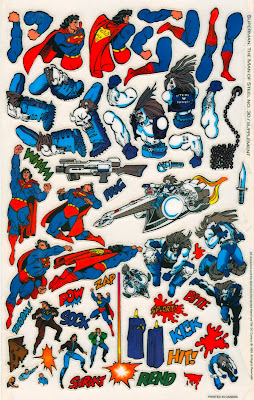 I have a friend who works at a used book store that deals in comics, and a recent collection they bought included two loose sheets of the above stickers, sans the books they would have come with—one of the two editions of 1994's Superman: The Man of Steel #30. The gimmick was that the issue had a "do-it-yourself" cover.

It was basically just a familiar background scene in Metropolis— 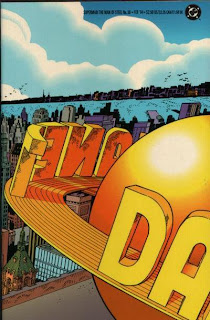 —upon which you could arrange Superman and Lobo however you saw fit.

As that strange decade's cover enhancements went, you gotta respect the creativity of this particular one.

I think I like the image of the untouched sheet of stickers as it is more than I'd like any arrangement of those stickers upon the cover, though. There's something oddly appealing about those Superman and Lobo heads and torsos floating around in white space, surrounded by multiple versions of their limbs.

Unfortunately, DC neglected to include a sticker of Superman's old haircut, so no matter how you arranged the scene, Superman had to have his mullet.
Posted by Caleb at 6:02 PM

Labels: lobo, phoning it in, superman

I would point out something about how that isn't technically a mullet, but some sort of other hairdo prominent in its time, but really it doesn't deserve that type of defense.

But with sound effects like "bite" and "rend"? I don't know about you Caleb, but I'd have one hell of a time trying to compose the most ridiculous scene possible with those stickers, it'd probably be 100 times more fun than actually reading the comic!

I've still got that comic. The beauty of it is that those aren't adhesive-backed stickers. They're plastic, and you can remove and reposition them on the plastic cover as many times as you want.

There was a Superman/Milestone crossover that did the same thing. Of all the goofy '90s cover gimmicks, these Colorforms ones were my favorites.

I remember seeing that cover (in Wizard, maybe?) with Lobo and Superman already attached, and always thought it looked a bit odd. Never knew about all the different parts. Neat!