Review: The Order of Dagonet #1

Jeremy Whitley and Jason Strutz have a great concept for a story in The Order of Dagonet. When England is threatened like never before, her knights are called upon to defend her. This being 2009, however, those knights aren’t necessarily guys on in armor on horses who are handy with various edged weapons. Rather, they’re the washed-up musicians, actors, writers and other celebrities and people of note that are generally rewarded with being knighted.

While it’s a great concept, and it’s laid out quite effectively in the first issue of what’s to be an ongoing series, I have some reservations about the execution. Some of my problems with the book may be just that—my problems—so I’ll raise them, and you can decide if the things that bother me will bother you or not.

The nature of the threat is appropriately English and appropriately supernatural. Workmen disturb and ancient tree, and accidentally release a devastating invasion from the Fairies Realm. Half humanoid, half plant monstrous not-so-good Good Neighbors pour into modern England, with Titania squishing the workmen, Oberon dissolving Parliament, and Puck ripping the head off the actor playing him in a production of a Midsummer Night’s Dream.

It’s a scary-ass version of the Fairie Court declaring war on England—so far so good. My problems with the book started when we started meeting the knights.

The first one is an aging heavy metal musician who looks and dresses a bit like Ozzy Osbourne, talks in a peculiar in-need-of-subtitles version of English like Ozzy Osbourne does, and he’s named…Dizzy Claiborne. 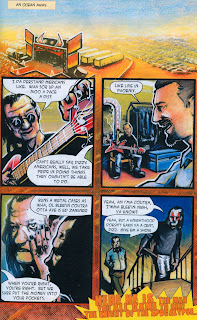 Now, Ozzy Osbourne being summoned by Merlin and teaming up with various modern English knights to defend their homeland from fairy invaders sounds like a pretty awesome story, but this isn’t that story—at least, not quite. This is an thinly veiled analogue of Ozzy Osbourne, and it’s this that doesn’t sit well with me. The character exists in a gray area between being a fictional character and being a real person, and the results of such analogue character casting almost always leaves me somewhat frustrated—it’s not having your cake and not eating it either.

The other two protagonists are better disguised (or else not on my radar in the same way that the faux Ozzy was).

There’s a writer of popular fantasy novels for children named Gene Everyman,who looks and dresses a bit like Neil Gaiman (only in brighter hues)… 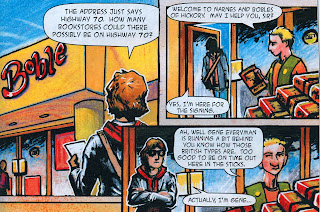 Again, Ozzy Osbourne, Neil Gaiman and, I don’t know, Ian McKellan or Anthony Hopkins teaming up to save England sounds like an awesome story, and one I’d much rather read than various analogues of those characters, as the presence of the analogues only serve to constantly remind the reader that these characters are supposed to be those other characters, but the creators couldn’t use them (or wouldn’t, or felt they shouldn’t or couldn’t).

The good news is that that’s the worst part of Whitely’s script, which otherwise moves quickly and efficiently through a pretty daunting premise and sets it up quite effectively—it’s really everything you’d want from a first issue.

Artist Strutz has a soft, highly gradated style that reminded me of chalk drawings. It’s not bad work at all, but it didn’t knock my socks off either. There are some neat designs in here, and both Strutz and Whitely know how comics work, so that the story looked and moved quite professionally (I was really impressed with the double-page spread showing the fairy release, for example), even if Strutz’s style isn’t my cup of tea at all.

(Which isn’t to say they don’t overreach at all. The opening sequence, in which the shape of the panels approximates a radio signal emanating from the BBC and then into a particular radio is laid out perfectly, but the narration boxes are at odds with the direction of the panel/rings on the second page). 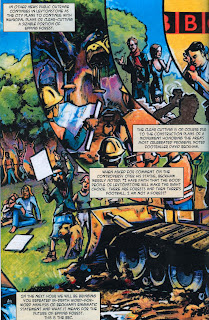 Proceed with caution I guess, but do consider proceeding. You can learn more about the book, including how to get one, at Firetowerstudios.com.
Posted by Caleb at 8:53 PM