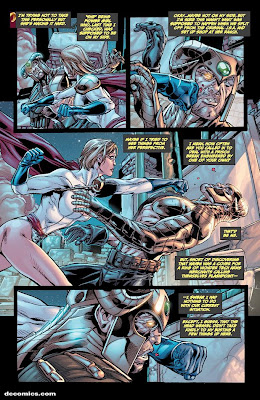 So this is apparently the second page of Magog #6, by Keith Giffen, Howard Porter and John Dell. You can see the page, along with three others, as part of a preview on Newsarama.com by clicking here.

On the first page, we see a splash of Power Girl punching Magog in his stupid Magog-y face, while he narrates, "Now I understand the cleavage cutout she sports. Distracting doesn't begin to describe it." And then there's the above page, which features a third panel in which Magog seems to be groping our heroine.

Okay, yes, I know that's not what's actually happening, and that the two-dimensional drawing of a three-dimensional world in which Magog's hand just happens to flail between the reader's eye and Power Girl's breast, but it looks like he's groping her.

So, Howard Porter penciled that image, then John Dell inked it, then someone else lettered it and someone else colored it and, presumably, an editor and/or assistant editor each looked at that page before it went to press (if not between each of those steps), and no one thought that panel might look a little weird?
Posted by Caleb at 1:42 PM