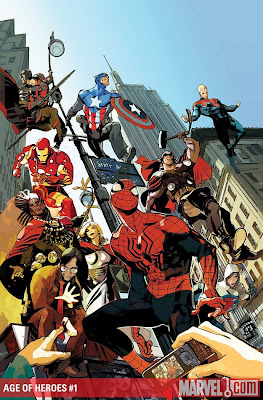 AGE OF HEROES #1 (of 4)
Written by KURT BUSIEK, RICK REMENDER, PAUL CORNELL & DAN SLOTT
Penciled by MARKO DJURDJEVIC, CHRIS SAMNEE, LEONARD KIRK & MORE!
Cover by GREG TOCCHINI
Heroic Age Variant by MIKE PERKINS
Eisner-winner & fan-favorite KURT BUSIEK RETURNS TO MARVEL!
THE HEROIC AGE IS HERE!
The Heroes are restored to their rightful place in this new era, and the world is safer for them. They defeated Osborn & his Siege on Asgard, now they have one last foe to face: the Mayor of New York—J. Jonah Jameson! Also, MI13 come to the US, but one of them isn't leaving—they are defecting to the AVENGERS?! Plus Dr. Voodoo's Sorcerer Supreme duties infringe on “date night” and how much trouble can Spider-Man get into in one day? The answer: A LOT!
40 PGS./Rated T+ ...$3.99

I’d buy this for the MI13 story alone; I didn’t realize how much I missed those characters until I saw some of ‘em on the cover here. I sure wouldn’t mind Black Knight and Excalibur (was that the codename she was going by…?) joining the Avengers, even if Captain Britain seems slightly more A-List. But hey, you can only have so many Captains on one team, right?

Note the number of pages and price up there by the way. If you scan Marvel’s previes, they charge that $3.99 cover price for everything from books marked 32 pages (although that usually means 22 story pages and ten pages of ads) to ones marked 48 pages.


AMAZING SPIDER-MAN ANNUAL #37
Written by KARL KESEL & KURT BUSIEK
Penciled by PAULO SIQUEIRA & PATRICK OLLIFE
Cover by MARCOS MARTIN
REVEALED AT LAST— SPIDER-MAN’S FIRST MEETING WITH CAPTAIN AMERICA!
An Untold Tale of Spider-Man reveals the web-head’s very first meeting with the Star-Spangled Avenger! Find out the secret history of how the Marvel Universe’s two biggest icons save the world from the deadly brains of the ROGUE SCHOLARS!
48 PGS./Rated A ...$3.99

“Rogue Scholars” made me laugh. But hey, I’m easy. 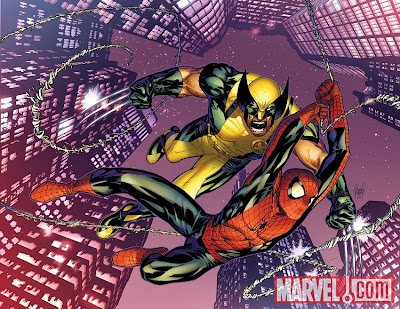 ASTONISHING SPIDER-MAN/WOLVERINE #1
Written by JASON AARON
Pencils & Cover by ADAM KUBERT
Foilogram Variant Cover by ADAM KUBERT
THE HEROIC AGE IS HERE!
Spider-Man and Wolverine! Everyone’s favorite wise-cracking web-spinner and ferocious furball come together in their first major series ever! The super-star creative team of Jason Aaron (WOLVERINE: WEAPON X, PUNISHERMAX) and Adam Kubert (ULT. FANTASTIC FOUR, X-MEN) send Spidey and Wolvie to the edges of the Marvel Universe as they face such awful beings as The Czar, Big Murder and Doom the Living Planet! But who is the major Marvel villain pulling the strings? And can Spidey & Wolvie refrain from killing one another long enough to find out?
32 PGS./Rated T+ ...$3.99

Oh my God, how high up are they? Wolverine’s not even hanging on to anything! Is he just going to fall all the way to the pavement and let his healing factor save him from death? Is that how he gets around the city, flinging himself from the tops of skyscrapers onto the pavement below, healing, and then climbing the next sky scaper?!

Oh, and also blah blah blah Adam Kubert’s too damn slow for a monthly blah blah what are they thinking blah blah. 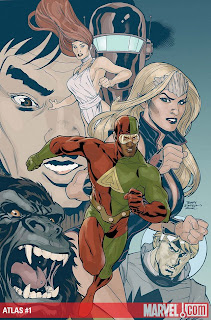 ATLAS #1
Written by JEFF PARKER
Penciled by GABRIEL HARDMAN & CHRIS SAMNEE
Cover by TERRY DODSON
Women of Marvel Variant by JELENA KEVIC-DJURDJEVIC
Heroic Age Variant by CHRIS STEVENS
HE HEROIC AGE IS HERE
It’s the Agents you love, in an ALL-NEW ONGOING SERIES! Someone has come to ATLAS looking for answers to some very strange questions, and on his trail is a danger of a new level. Marvel's Rat Pack are back to solve the mystery behind THE 3-D MAN. The star team of Jeff Parker and Gabriel Hardman return to take Jimmy Woo's agents to the weirdest and most fantastic heights yet!
40 PGS./Rated T+ ...$3.99

Long, long ago—like, in 2006 or so?—I briefly contributed to a new comics news site, and one of the interviews I conducted for them was with Jeff Parker. The subject was his two teams that began with the letter A—the Marvel Adventures version of the Avengers and the Agents of Atlas, who were just being reintroduced in their first miniseries.

I remember one of the questions I asked Parker was about 3-D Man, who was shown to be part of a 1950’s Avengers team with the other Agents in Avengers Forever, and he mentioned he had plans for the character.

It looks like he’s finally going to get to put those plans in action. If I still lived near a comic shop, I’d totally be psyched for May to check this out; as is, I guess I’ll look forward to the eventual trade paperback collections. 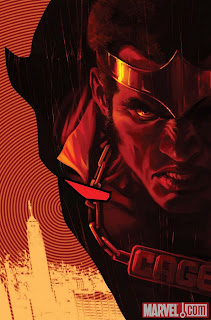 DAREDEVIL: CAGE MATCH #1
Written by ANTONY JOHNSTON
Pencils by Sean Chen
Cover by MARKO DJURDJEVIC
Before the Shadowland comes, we look back at a bit of brutal history between Luke Cage and Daredevil, revealing a mutual respect that may soon be torn asunder.
32 PGS./One-Shot/Rated T+...$2.99

That is an excellent title.


DAZZLER #1
Written by JIM MCCANN
Pencils & Cover by KALMAN ANDRASOFSZKY
She’s survived Necrosha, but how can Dazzler defend herself against the onslaught of villains from her past that have targeted her all at once?! Dr. Doom! The Enchantress! And Rogue?! And what's worse--they are led by her murderous sister, MORTIS! This is no family reunion, but the disco-ball shattering showdown you’ve been waiting for! Will Alison Blaire survive this blood-soaked trip down memory lane? Find out in this special by fan-favorites Jim McCann (NEW AVENGERS: THE REUNION) and Kalman Andrasofszky (CAPTAIN AMERICA)!
48 PGS./One-Shot/Parental Advisory ...$3.99


RESCUE #1
Written by KELLY SUE DeCONNICK
Penciled by TBA
Cover by TRAVEL FOREMAN
Spinning out of the Eisner-winning INVINCIBLE IRON MAN!
When Tony Stark needed to save Pepper Potts’ life, he gave her the Iron Man treatment -- with a repulsor chest implant and a suit of armor to call her own! Pepper went on to become Rescue, one of the heroes of the fan-favorite, critically acclaimed arc WORLD’S MOST WANTED! Now see one of Rescue’s incredible solo adventures, as Pepper Potts lets loose with her bleeding-edge suit and her astonishing power!
32 PGS./One-Shot/Rated T+ ...$3.99

I guess part of Marvel’s Year of Super-Broads or whatever they’re calling it is publishing one-shots featuring various tertiary female characters (Firestar had a one-shot already announced, for example). That’s kind of a neat idea, and I guess maybe they’ll collect them all together into something with an unfortunate title (Her-oes Before Bros….?) eventually.

Also, how cool is it that the wife of Invincible Iron Man writer Matt Fraction is writing a one-shot about Iron Man’s love interest? 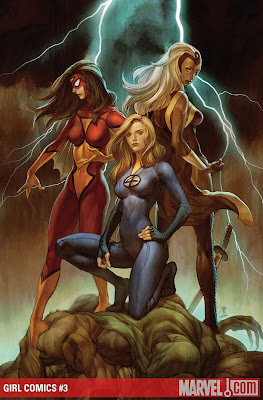 See, this is the difference between male and female superhero cover artists. Jo Chen will go to the trouble of drawing a character in the so-called “brokeback” pose, the one that allows them to show off their breasts and ass simultaneously, and yet she draws a cape covering the ass, thus defeating the whole purpose of the pose. Let’s hope they can make the cover for this issue of Girl Comics more exploitive in post-production…


MARVEL HER-OES #2
Written by GRACE RANDOLPH
Art by CRAIG ROUSSEAU
Cover by SARA PICHELLI
Janet van Dyne’s going through a bit of a teenage crisis. She has no boyfriend, her grades are tanking, and she doesn’t quite fit into the high school scene. Oh, and she can shrink down to the size of a wasp, sprout wings and fly on a moment’s notice! It’s a hard knock life for the girl under the popular radar, until she realizes the Queen of Cool herself, Namora, has got some skills of her own. Meanwhile seems like Janet’s peace-lovin’ gal pal, Jenny, has got some issues maintaining the peace. Forget Geometry class, Jenny needs to enroll in Anger Management Advanced... before Janet and Namora get caught in some hulked-up destruction!
32 PGS./All Ages ...$3.99

I kind of wish I worked in a comic shop, just so I can listen to all the different ways people pronounce the title of this comic out loud.


PUNISHER #17
Written by RICK REMENDER
Penciled by ROLANEL BOSCHI
Cover by MIKE MCKONE
Heroic Age Variant by TBA
Prelude to PAYBACK!
Punisher: REBORN! In the past few months, Frank Castle has had his family desecrated by the Hood, been killed by Daken, been slashed to ribbons by The Hand, been hunted by Microchip’s Deadly Dozen, and had a bounty placed on his head by Jigsaw. But now, The Punisher has made a list of his own. God help you if your name is on it. It’s time for the rise of Frank Castle. It’s time for PAYBACK.
32 PGS./Parental Advisory ...$2.99

I’m honestly quite curious to see how the Punisher comes back to life, given the fact that he’s currently some sort of Frankenstein-like patchwork monster man.


SENSE & SENSIBILITY #1 (of 5)
Written by NANCY BUTLER
Pencils & Cover by SONNY LIEW
Award-winning writer Nancy Butler, adapter of
Marvel’s best-selling adaptation of PRIDE & PREJUDICE, returns to Marvel with another Jane Austen classic: SENSE & SENSIBILITY! Alongside incredible artist Sonny Liew (My Faith in Frankie, Wonderland), Butler brings to life the world of Elinor and Marianne Dashwood, two daughters without parents or means, forced to experience hardship, romance, and heartbreak, all in the hopes of achieving love and lasting happiness.
40 PGS./Rated A ...$3.99

When Marvel was adapting Pride and Prejudice, I remember seeing one of Liew’s wonderful covers and thinking how much better that book would look if Liew was doing the interiors as well. It’s nice to see someone else at Marvel had the same idea.

Guess I better hurry up and read the original novel, so I can read this… 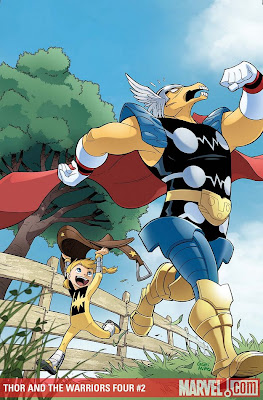 Actually, Astonishing Wolverine/Spider-Man is bimonthly so at least Marvel is admitting that it would have never been monthly.

All magical space ponies tremble in fear at the name: Katie Power!

Glad you like the Thor and the Warriors Four #2 cover, Gurihiru totally rocked it :)

"I’m honestly quite curious to see how the Punisher comes back to life, given the fact that he’s currently some sort of Frankenstein-like patchwork monster man."

Y'know if I was doing it'd have Frankencastle cut up, shot, blown to peices etc then have a healthy and happy Frank Castle come around the corner.
Everyone - Frank? You're alive?
Frank - Yeah, I was just down in Mexico for a month hunting drug lords.
Everyone - Then who the heck is this? (Point at Frankencastle)
Frank - I dunno.

And then just go from there.