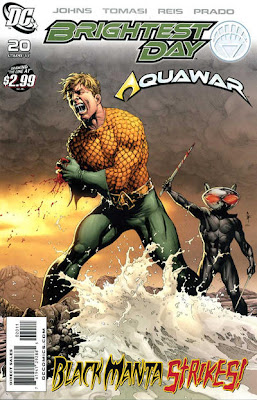 Brightest Day #20 (DC Comics) At first I was surprised to see all that viscous, white saliva in Aquaman’s mouth, as if his mouth was full of very thick, very dry, very stringy spit. You’d think someone who swims around underwater talking and breathing would always have a freshly rinsed out mouth. But then I noticed that the ocean he’s standing next to doesn’t seem to be made of water at all, but Elmer’s glue, so I guess that’s really glue in his mouth...?

Anyway, this issue is entirely devoted to the Aquafamily fighting off Black Manta, Siren and the inter-dimensional water-people invaders from the Bermuda Triangle, and Aquaman does indeed get seemingly disintegrated, so I imagine he will be typing 75 words a minute again when we see him again.

It occurred to me this issue that it was kind of cool that Aquaman was now controlling undead zombie sea life instead of living sea life, as he orders an army of dead fish to fight for him. It always made me a bit uncomfortable that he was basically press-ganging whales, dolphins, squid and other creatures who aren’t really all that great in a laser gun fight into battle. These things are already dead though, so if one-third of ‘em don’t survive the charge, no big loss, right?


DC Universe Online Legends #2 (DC) After having seen the art in this second issue... 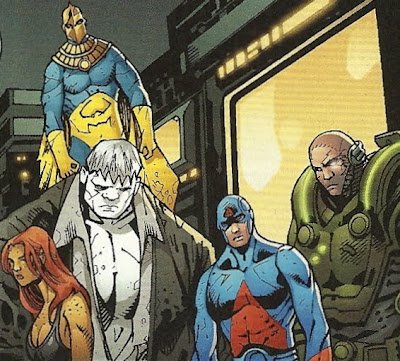 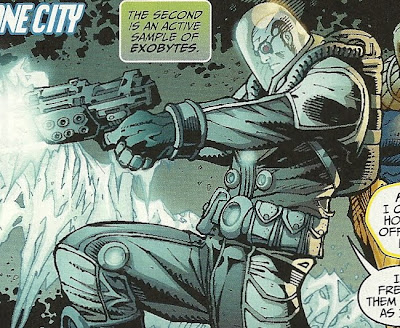 ...I’m thinking maybe a bi-weekly schedule wasn’t the best idea for this series. And I like Howard Porter, who looks like he might have done very rough sketches which the other three credited artists inked directly without finishing, based on the results.

Somewhat worryingly, this is only the second issue of the series, and the drop in quality is already precipitous. I’m scared to imagine what this is going to look like in, say, ten more issues.

Green Lantern #62 (DC) The cover shows two groups of characters, everyone wearing an expression somewhere between pretty irritated and insane with rage, reaching out for Hal Jordan.

This issue is about the fact that Hal Jordan is so popular that two different cliques want him to hang out with them—the former Justice Leaguers, and the rainbow space monsters.

I’m exaggerating, but only a little. Hal and the “New Guardians” face off against the little villain who has been collecting the emotional color avatar thingees, who was revealed a few issues ago as being one of the oldest villains in the DCU (and one of Kurt Busiek’s favorite, based on usage).

That villain kicks Hal’s ass (but unfortunately does so by throwing special effects at him, so Doug Mahnke didn’t get the opportunity to provide a nice Hal-getting-hit image for me to scan), and, when he wakes up, he decides between the two groups of potential allies.

Mahnke’s art is, as always, impressive, but a bit poorly served by so many inkers (check out Superman’s face in the lower left-hand corner of page 18). Compared to this week’s DC Universe Online, however, this book belongs in a museum.

This issue also includes one of those annoying (to me) five-page excerpts that sometimes run in the backs of DC comics to preview upcoming books, but the book being excerpted is the very next issue of Green Lantern, so Green Lantern #62 ends with five pages of Green Lantern #63. That’s kind of weird.

Also weird? The solicitation and cover shown on dccomics.com is pretty different than the plot in the actual book and the cover that shipped on it. The details about the next issue on DC's site lists Mahnke and Alamy as the artists, but the preview in the back of this say it’s by Ed Benes, Ardian Syaf and Vincente Cifuentes.


Tiny Titans #37 (DC) A new Legion of Super-Pets comic featuring various DCU pets in capes and costumes is something I’ve been wishing for, and now that Art Baltazar and Franco have given us some short stories featuring some super-pets, I see that a comic featuring a realistic portrayal of super-pets might not actually be all that exciting: 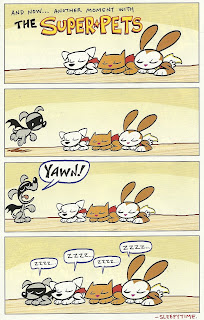 Cute as the dickens, but not all that exciting.

This issue, by the way is the one with with Mary, Freddie, Billy, Hoppy and Tawny on the cover, along with the blurb “The Shazam Family Super Special!”

He really shakes up the Super-Pets, too!

Venom/Deadpool—What If? #1 (Marvel Entertainment) I had pre-ordered this based on the concept (“What If…Venom Possessed Deadpool?”) and the cool Skottie Young cover, although I ended up reading about half of it as it was serially published in the backs of other What If? specials. As I mentioned back then, those parts were pretty poor.

The other two chapters, which account for the second half of this one-shot, are even worse, with writer Rick Remender following chapter-long conceits involving Boy George and gangsta rap with ones based around The Jerry Springer Show and Joan Rivers’ red carpet work. So, that’s the sort of relevance of the humor.

I didn’t find any of it very funny, honestly, and I’m kind of confused why this is the story attached to the “What If…Venom Possessed Deadpool?” premise. As far as I can tell, the main thing Venom gives Deadpool is a slightly bigger build, a longer tongue, and a different font to speak in.

I can’t think of anyone I could honestly recommend this too.


Young Justice #1 (DC) Huh. The #0 issue was written by a couple of folks involved with the show, but with this official #1 issue, the Tiny Titans and Billy Batson and the Magic of Shazam writing team of Art Baltazar and Franco are on scripting duties. Artist Mike Nortaon remains.

It’s a little unusual for one of DC’s based-on-a-cartoon books in that not only does it seem to continue storylines from the show, but also in that it’s not structured in the more usual done-in-one format.

In this issue, the cold, remote Superboy and Miss Martian move into Justice League HQ, and something weird is going on, including an appearance by Snapper Carr and a villain I wouldn’t have expected to see in this book.

Decent enough stuff, I guess.
Posted by Caleb at 6:42 PM

DC clearly has no idea who's drawing their books.

Just last week they had an issue of Gotham City Sirens previewed on their blog which they claimed in the text was drawn by Lee Garbett (as they've been solicited for months now, though he isn't drawing it).

They actually included the page that said the actual artists' names though: Andres Guinaldo & Ramon Bachs.

Thankfully they've corrected it since then, but it does show the huge gap between their solicit info and the ppl actually working there books.

I hated the Venom/Deadpool comic even though some on the internet seem to love it. Glad to see another blog agrees with me.

That's some pretty wretched artwork from DC Legends. On the other hand, the Tiny Titans is simply adorable.

And EVERYONE wants to hang with Hal. He's like candy apparently.