This is the cover of Lockjaw & The Pet Avengers Unleashed, a trade paperback collecting a four-issue miniseries of the same name from earlier this year, as well as a one-shot featuring the characters: 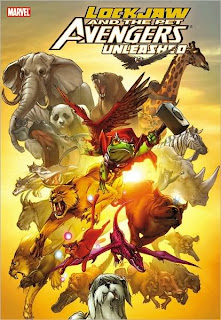 This is the cover of Batman: Joker's Asylum Vol. 2, which collects five "Joker's Asylum II" branded one-shots from earlier this year: 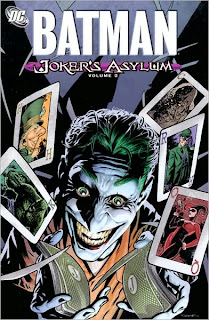 This is a crappy cell-phone picture of the two books stacked atop one another: 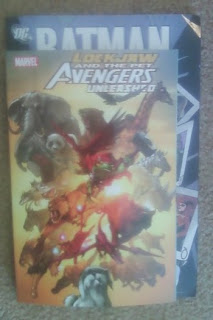 So same cost, almost the same length, but much smaller pages on the Marvel book.

I probably wouldn't have even noticed that the two were priced identically despite their differing sizes if I hadn't received both of them together in a shipment of graphic novels form a popular online shipper of graphic novels (I'm sorry brick-and-mortar comics shops! I'd prefer to buy graphic novels from you, but the closest one of you is 45 minutes away, and gas is so expensive!)

The smaller size of the Pet Avengers book didn't really bug me, even though Ig Guara's beautiful art work would have been better served by a comic book-sized collection (The artwork was, of course, produced for a standard sized comic book, so when it came time to publish this collection, it had to be shrunk somewhat. It looks and reads just fine, but the size just isn't the size it was made to be in—kinda like watching a DVD of a film on your television set instead of watching it in the theater. No matter how nice a TV you have, you're still aware that it's not the ideal way of watching the film.

And, perhaps more importantly, I enjoyed it and was entertained by the book; if it wasn't any good, I suppose the fact that it's not much of a value would have proved more irritating to me as a reader and consumer of a Marvel product. Like, it would have added a perceived insult to my perceived injury.

Anyway, just thought that made for a strange contrast. For a while now DC and smaller publishers have been able to sell 22-page comics with ten pages of ads (or less!) to readers for $2.99, while Marvel comics of the same length have cost a whole extra dollar more, for reasons that don't really make any sense from the consumer's perspective.

This is another example of a Marvel comic costing more than a DC comic for reasons that are unclear. Well, in this example the cost is the same, but the size of the product you get for that price is fairly dramatically different.
Posted by Caleb at 4:12 PM

From what I've been able to tell, nearly all all-ages books from Marvel are in the slightly smaller (or even smaller still) size...

Oh, yeah. I always noted Marvel books were more expansive than DC ones. Specially when buying them new in a comic shop here in Switzerland where they always add the shipping cost. For the same number of pages Marvel books tend to cost more.
Just compare something like Planet Hulk to Sword of the Atom. Or Geoff Johns' Teen Titans (when the trades collected more issues) to the Deadpool Classic volumes.
Or with less pages, compare a Ghost Rider/Punisher book to an Outsiders/Secret Six!