Man, I love this page: 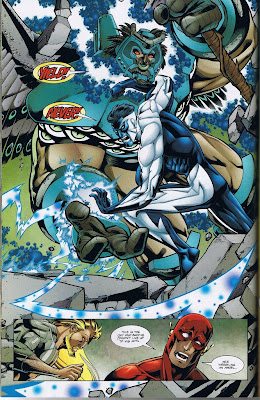 That's from 1997's JLA #7 by Grant Morrison, Howard Porter and John Dell. It may be my favorite superhero comic of all time, or at least the second half of my favorite story. It's the one where the League rescues the angel-made-flesh Zauriel, who is on Earth in part to warn of rogue angel Asmodel, "a King Angel of the Bull Host of Heaven," who is launching a rebellion while The Presence's attention is temporarily diverted by "a seemingly impossible event."

More than just about any other story in the Morrison/Porter/Dell run, save perhaps the final story arc, this is the one where the League-as-Apocalypse-fighters take seems most fully realized, and the characters featured in it all do super-superhuman feats: Fighting angels, lifting the moon when it begins to fall to earth, lifting an crashing angel "chariot," and, in the case of first Martian Manhunter and then Superman, battling an archangel in hand-to-hand combat.

I found a scan of the page online while I was looking for an image of Superman doing something Moses like to illustrate last night's post, and thought Superman repeating the feat of another Old Testament patriarch might be in the right ball park. I ended up not really needing to use it there though, and figured I'd just post it all by it's lonesome tonight.

After all, it's not like there's ever a bad time to take a page from that run of JLA and just marvel at it, you know?
Posted by Caleb at 4:36 PM

the only thing about the Morrison run I didn't like was that for a time he was saddled with Electric Boogaloo Superman.
He did the best he could with him but this panel and so many others would have been better with classic spit curl Superman in my opinion.

According to Flash that's the point. This page is so great *because* Morrison was saddled with Electric Superman. Some of my favorite memories of the run was Morrison dealing with '90s situations- Hippolyta as WW, Aquaman mistaking Zauriel for Katar, Huntress telling Steel he's in charge because he's got an S on his chest...

Honestly, when I'm in pain or worried, this scene helps me get through it. Silly, I guess, but Superman standing up for us against Heaven always meant the world to me. "How dare you attack my people?!"