Groundhog Day comes but once a year...

Monday night I turned to Google Image to help me find some photo reference of a groundhog emerging from his hole to see (or not see) his shadow, and I came across this cartoon from last year, by Rob Rogers of the Pittsburgh Post-Gazette.

It’s a really nice drawing of a groundhog completely freaking out, but it was strange to see a political cartoon from that long ago, divorced from the news of the day by almost a year, and realize it didn’t really make all that much sense any more…at least, not as much sense as it would probably have made when it was originally drawn and published. I guess President Obama proposed a pretty large budget last February…?

Another 2010 Groundhog Day cartoon I found mentioned a Toyota being unable to stop, which was still a big news story last year around this time.

As holidays go, Groundhog Day is a pretty fascinating one to watch America’s political cartoonists play with, as it features a set of fairly universal iconography that can easily be applied to pretty much any topic, but unlike say, Christmas, Easter or Thanksgiving, the iconography is extremely limited: Groundhog, emerging from hole, shadow, seeing or not seeing it, six more weeks of winter, or not. Those are the puzzle pieces cartoonists have to rearrange, remix, or swap out for something.

Let’s head on over to Daryl Cagle’s Political Cartoonists Index which, of course, has a dedicated Groundhog Day gallery, and see what cartoonists came up with this year. 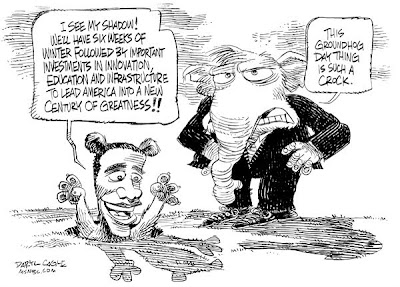 Cagle’s own cartoon is…weird. It features President Obama either dressed up in an adorable little groundhog suit, or as some sort of mutant human/groundhog hybrid, emerging from a hole. Given the shortness of his arms, I’m assuming it’s the latter. Why is Obama a groundhog? I don’t know. Watching the ritual is a man with an elephant’s head. That’s probably the symbol of the Republican party, expressing his disbelief in the groundhog day superstition, but he looks so strange there, interacting groundhog with a man’s face, instead of a man with a donkey’s face. Henry Payne of The Detroit News similarly features Obama as the groundhog, but rather than groundhogizing the president, Payne simply has President Obama emerging from a hole in the ground, which struck me as much funnier, simply because of the absurd incongruity of the president emerging from a hole n the ground. (The mailbox seems kind of like unnecessary overkill, cluttering the message though; are any of Payne’s readers likely to not recognize who that man is supposed to be, or that he’s behaving in a groundhog like fashion? By naming him “Obama Hog,” it kind of raises questions about whether that is the president or, just some guy who looks like him and has his last name for his first name).

Bob Englehart of The Hartford Courant provides another cartoon inserting President Obama into the Groundhog Day ritual, but here he’s one of the top-hatted Inner Circle guys who pulls the groundhog out of the ground, rather than as the groundhog himself. 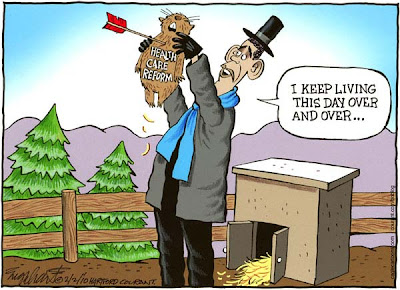 This groundhog isn’t Punxsutawney Phil, but is instead named Health Care Reform, an unusual name for a groundhog, which he has apparently had branded across his torso. Given the torture he must have endured, perhaps the arrow that claimed his life in this image came as a relief…?

No, “Health Care Reform” probably isn’t his name; it’s what he’s supposed to symbolize in this cartoon, via the proud, lazy tradition of straight-up labeling something as something else in a political cartoon. Why is Health Care Reform being shot with an arrow, every time the president holds it aloft? I don’t know; the president’s health care reform hasn’t yet been shot down in a meaningful way. So far, House Republican’s passed a purely symbolic We Sure Don’t Like This measure, and a few federal judges in lower courts ruled it unconstitutional, but it will ultimately be up to the Supreme Court to make that call.

Of course, the arrow itself isn’t labeled, so we have no way of telling who it is that keeps shooting Health Care Reform to death.

Whoever it was, it wasn’t Sarah Palin. 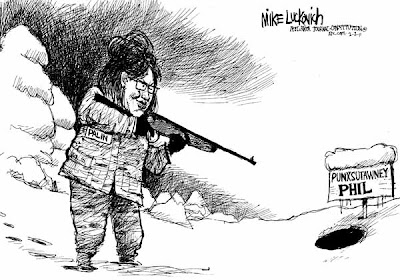 As we can see in Atlanta Journal-Constitution cartoonist Mike Luckovich’s cartoon, she doesn’t use a bow or crossbow, but a high-powered rifle.

Englehart isn’t the only cartoonist to prominently feature a dead groundhog this year.

John Cole draws one face down in the snow, its little legs sticking straight up in rigormortis, with a guy in a top hat asking another guy in a top hat, “What does it mean if he succumbs to hypothermia?”

Bill Schorr also drew a frozen-to-death Groundhog in this repeat from last year: 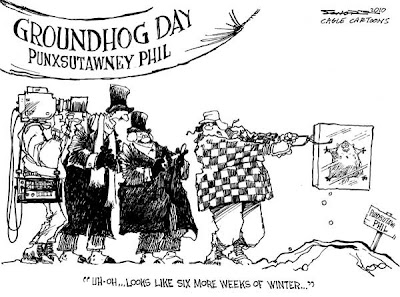 I like this one a bit more, as the groundhog may have frozen to death, but he froze to death in a funny way, and his death seems easily reversible: Just thaw him out, and he’s good to go.

Jeff Darcy of The Plain-Dealer has a groundhog stuffed and mounted above some guy’s mantle: 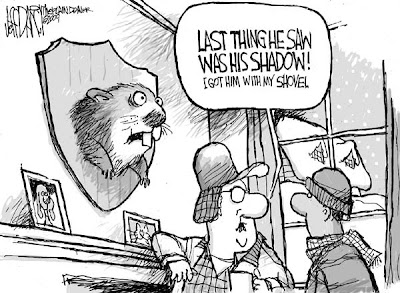 For some reason, this dude decided to not only mount the head as a trophy, as is usually the case with the taxidermied corpses hunters display in this manner, but he includes the forelegs as well, making it look like the groundhog died while trying to wiggle its way through a too-small hole in the man’s wall.

The weapon the fellow in the Darcy cartoon used was a shovel which, incidentally, is what the gentleman in Brian Duffy’s cartoon plans to brain the groundhog with: 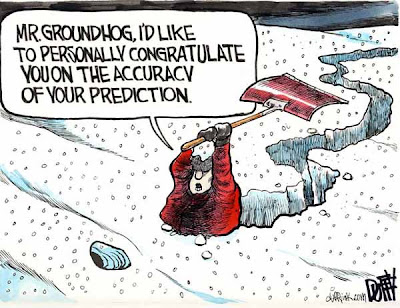 Are these before and after images of the same drama?

And if you find yourself wondering what happened to the rest of the groundhog’s body after the shovel guy cut off its head and forepaws to mount on his wall, it was, of course, roasted and eaten by hobos:

Rick McKee of the Augusta Chronicle has the groundhog whispering to the Inner Circle that global warming is a crock: 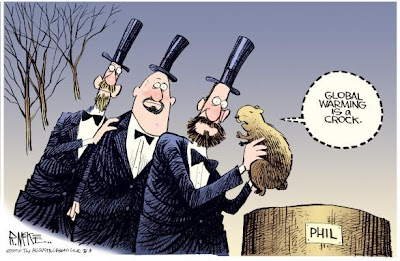 The Inner Circle top hats are obviously pretty freaked out about this; is it the message, or simply the fact that the groundhog is speaking to them? (This groundhog has something in common with Spider-Man).

My personal favorite of this year’s crop of groundhog cartoons is Larry Wright’s, which seems to feature a pissed off groundhog, with his few groundhog possessions tightly packed into two tiny groundhog-sized suitcases, moving out of his hole in the ground, presumably because it’s been foreclosed upon, or he can no longer afford payments to his, um, hole in the ground: 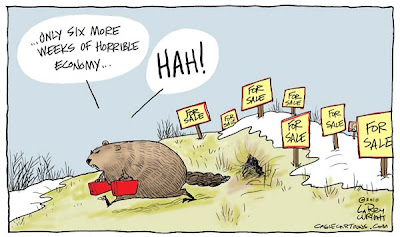 Finally, there’s this one from Randy Bish of the Pittsburgh Tribune-Review, which I believe may also be a repeat, as it looks very familiar: 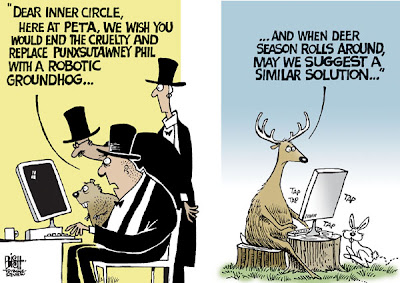 It raises a lot of questions, like, why are those top hats and the groundhog looking at a blank, black monitor screen? What is the dear’s computer plugged into? And who wouldn’t want to see see deer replaced with robot deer during hunting season? Wouldn’t hunting robot deer be sort of awesome? Hell, I’m a vegetarian and former member of PETA, and I’d take up hunting if I could shoot robots.

Actually, I was most curious about this hole robot groundhog thing. Is it for real? It is! Awesome.
Posted by Caleb at 7:27 PM

No offense, Caleb..but I honestly can't tell...do you just not understand politics...or even worse, did you not get the reference to Bill Murray's Groundhog Day?!?