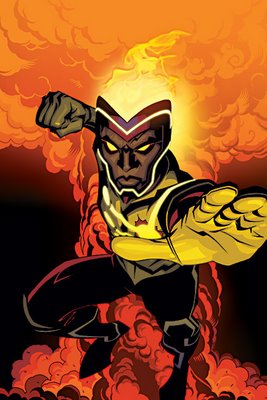 This week’s 52 back-up origin is that of Firestorm, Jason Rusch.

Actually, he’s Firestorm II. The original Firestorm, Ronnie Raymond, died in the midst of Idenity Crisis (kinda sorta), and Jason was in the right place at the right time to become the next Firestorm, as Mark Waid and Jamal Igle’s origin story explains in slightly more detail.

It’s an odd week for this origin to appear, and not simply because Firestorm’s biggest appearance in 52 happened 13 weeks ago (so if anyone was reading that issue and thinking, “Hm, I wonder who that guy whose head is on fire is?” this story might have been useful back then). No, DC’s April solicits were released on Monday, and they included the two words Firestorm fans have been expecting/dreading for a while: “Final Issue.”

The writing has been on the wall since before this latest volume of Firestorm launched, if you ask me, and I’m actually surprised it’s lasted as long as it has, having gone through (by the time it concludes) three writers and several new directions.

The original Firestorm was never all that popular a character, though he was perhaps the most popular brand-new DC hero since the ‘70s, earning a fairly healthy solo title run (What was it? Over 60 issues?) and a spot on one of Hanna-Barbera’s Saturday morning Justice League ‘toons.

He hadn’t been up to all that much in the DCU. Prior to his Identity Crisis appearances, he was a member of the Nightwing-lead JLA that took over for the Big Seven when they were presumed dead (in “The Obsidian Age” epic). Prior to that, he was one of several JLA reserves who helped Kyle Rayner and the mysterious new Green Lantern Corps in Green Lantern: Cirlcle of Fire and he was one of several heroes who joined a Justice League Europe revival that The Mist promptly decimated in the pages of Starman. And prior to that, he was a member of the Captain Atom lead faction of the Justice League, which starred in the horribly titled Extreme Justice, which was cancelled as soon as DC realized just how stupid a name Extreme Justice really was.

So, kinda sorta killing him off didn’t really shake the foundations of DC fandom, although replacing him with a brand-new character pretty much guaranteed the cancellation of the new title.

Say there are, I don’t know, 1,000 Firestorm fans who still read comics and are likely to buy a Firestorm monthly based solely on their affection for the character. Probably 990 of those are more interested in the character, his personality and his history than his codename and super-powers. Since Jason was a brand-new character who would inherit only the codename and super-powers, he would alienate many of those Firestorm fans, since he wasn’t their Firestorm.

Another drawback: You would think that giving a new character the brand name “Firestorm” would free the creators up to tell stories not bound by old continuity, making the new character as new reader friendly as possible, but the new Firestorm series was chockablock with old Firestorm supporting cast members and villains.

So, to review: The new Firestorm series would be sure to irritate whatever few Firestorm fans were still reading comics all these years after the last volume was cancelled and prove unwelcoming to new readers, with the strongest selling point being the name of the hero.

Now, keep in mind, none of this is a reflection on how well written or how well drawn the series itself was. These are just factors that existed at the outset, when the publisher, editors and original writer were considering launching a new Firestorm title with a new character in the starring role.

Personally, I won’t miss the title, nor will I miss the character any more than I missed Ronnie Raymond (I imagine Jason will, like Ronnie, still be as visible as any other third-tier DC hero without a book of his or her own around the DCU for the foreseeable future).

If there’s a positive to Firestorm’s cancellation, it may be that DC will realize that the quality of the stories they’re telling, the creators doing the story-telling and the characters in the stories are what really sell their comics, and not the names. Looking at other new series to launch since Firestorm did, far too many seemed to make the same mistakes, banking on the name of a relatively unpopular hero to sell a book better than the relatively unpopular hero himself could (Think Manhunter, All-New Atom, Blue Beetle and the renamed and refocused Hawgirl and Aquaman: Sword of Atlantis) .

But we’re not her to bury Jason Rusch or praise him, we’re here to look at the “Essential Storylines” segment of the origin.

DC does a pretty good job of it this week, actually. Unlike the recent Blue Beetle origin, they don’t pretend every single story the hero has ever been in to be “essential.” Instead, they suggest his origin, his re-definition and his role in the larger events of the DC Universe. There isn’t a whole lot to add to that list. A completionist could look to the rest of the issues in the current volume of the title, and the Firestorm guest appearances I mention below. And, in the case of the latter, I do so more by way of recommending good stories featuring Jason Rusch that are also nice introductions to the character than claiming they’re essential.

FIRESTORM #1-#4 (2004): Dan Jolley, ChrisCross and John Dell introduced readers to Jason Rusch, who inherits Ronnie Raymond’s Firestorm powers and codename in a freak accident. They end up coming in rather handy. Green Lantern John Stewart and J’onn J’onnz appear in that fourth issue.

FIRESTORM #20-#22 (2006): These Infinite Crisis tie-in issues are all by writer Stuart Moore, the series’ second writer, and they feature Jason and Donna Troy’s other recruits on their trip through space. There are guest-stars galore, but Animal Man, Donna and Professor Stein appear most prominently.

FIRESTORM: THE NUCLEAR MAN: REBORN TPB: You know what this trade paper back needs? More colons. It collects the first “One Year Later” story arc, in which Jason’s new status quo is that he must merge with Firehawk, who said she was going to retire at the end of Identity Crisis, but apparently kept on heroing…and became the youngest U.S. Senator in history. I only read the first of the four issues contained within, and didn’t like it at all. According to DC’s write up of its contents, “Firestorm must stop a deadly nuclear accident and a threat to his very existence. It all leads to an epic battle with Killer Frost and Mister Freeze that rages from the mean streets of New York City to the very heart of the sun!”

IDENTITY CRISIS: As I’ve said about 300 times before, this is six-sevenths of a compelling superhero mystery (provided you don’t mind Justice League stories featuring brutal rape scenes), one which falls apart at the end and flies in the face of both story logic and DCU continuity (The killer couldn’t possibly have known who Superman or Robin really were; nor did he or she have any real motivation; nor would he or she have any reason to have the particular equipment he or she had with him or her when he or she did what he or she did to poor Sue Dibny, and on and on). Jason doesn’t appear in the story at all, but it’s where Ronnie gets mortally wounded, thus setting up Jason’s acquisition of the Firestorm powers. It’s perhaps the single lamest death of a hero in all of DCU history…I mean, even Nightblade and Razorsharp got killed while fighting someone tough, like Superboy-Prime. This story is also the one that returned Lorraine “Firehawk” Reilly to reader consciousness.

INFINITE CRISIS: Jason gets recruited by Donna Troy to join her team of cannon fodder on a mission to the center of the universe where they fight Alexander Luthor’s fingers for a few seconds for, um, some reason. 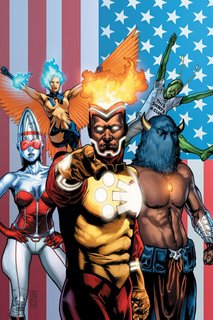 With all of the heroes who comprised the last incarnation of the Justice League missing, Firestorm and Firehawk gather together a new team to fill the void. So far, their line-up consists of Ambush Bug, Super Chief and the Bulleteer, and they aren’t having much luck finding any other recruits. When Jason asks Green Arrow to join, he not only shoots him down, but he tells him he’ll be by shortly to take away his hand-me-down League communicator. Ouch. Jason’s League has exactly one adventure, where they take on Evil Skeets’ army of pirates and cyborgs in the streets of Metropolis, and get their asses handed to them. The surviving members break up by issue’s end. This short-lived incarnation of the League is one that is just begging to appear in JLA: Classified sometime soon. Maybe when DC runs out of two-year-old inventory stories to run there, they’ll see if Keith Giffen and some collaborator pals want to tell a lost tale of this League.

Action Comics #841-#843: When the Johns/Donner/Kubert needed more time before coming onto Action Comics OYL, Kurt Busiek, Fabian Nicieza and Pete Woods stalled for them, delivering this incredibly fun three-parter pitting Superman and one of the most random assemblages of DC heroes ever against an alien threat. In the first issue of the arc, Superman meets a skeptical Jason in Baltimore, and later, when the heroes are all captured and de-powered, the pair team up along with Nightwing, Bluejay, Skyrocket, Livewire, the Veteran and Aquaman II to save the day. The storyline is slated for collection shortly in Superman: Back in Action.
Posted by Caleb at 7:46 PM