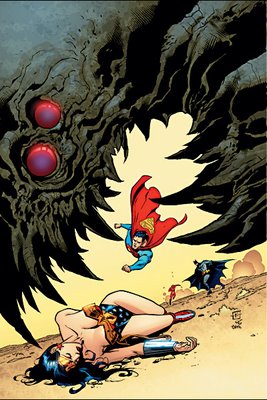 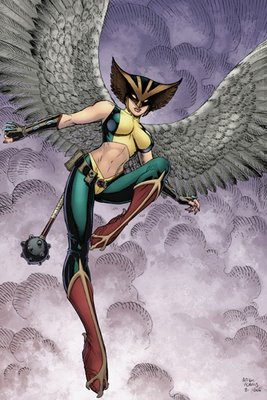 Say what you will about the current direction of the Justice League title, or the DC Universe in general, you gotta give DC props for trying to please all of the people all the time.

They’re letting Alex Ross and friends present a “What if the 1970’s never ended?” take on the team in maxiseries Justice.

In the Johnny DC line, they’ve got a gigantic team reflective of the one from Cartoon Network’s cartoon in Justice League Unlimited.

The flagship title, politically incorrectly re-named Justice League of America, has gone all character-focused and Law and Order-y, thanks to novelist Brad Meltzer (he of the rape retcon and mind-wiping).

Finally, for those who liked the JLA era ushered in by Grant Morrison, JLA: Classified continues to tell stories featuring the world’s seven greatest heroes, with rotating creators.

All four books have their peculiar ups and downs, and perhaps it’s not entirely fair to rate them against one another, let alone make them fight, but what the hell, let’s make them fight, huh?

December 28th saw the release of Justice League of America #5, written by Brad Meltzer and illustrated by Ed Benes and Sandra Hope. (The Hawkgirl image above is from the variant cover of said issue; DC didn’t post the Michael Turner version on their website because they’re probably as embarrassed by it on Turner’s behalf as I am). The fourth part of the seven-part (is that right? Seven fucking parts?) “The Tornado’s Path” storyline, in which a variety of superheroes who are destined to become the new Justice League deal with Amazo for the three thousandth time and listen to Solomon Grundy tell them how rough life is being a constantly reincarnating swamp monster.

January 4th saw the release of JLA: Classified #31, the sixth and final chapter in “Sacred Trust,” a story written by Howard Chaykin and illustrated by Kilian Plunkett and Tom Nguyen (The image of the prone Wonder Woman imperiled above is the cover of the issue in question). The story features the Big Seven iteration of the League, from somewhere right after “The Obsidian Age,” although Aquaman’s look, presence and powers makes the placement of the story in continuity difficult (if not impossible). There’s a war brewing between two fictional South American countries who are using metahumans as weapons, and the League investigates in cognito, since the U.N. has forbidden their involvement.

Which is the better-written book? Well, it depends on you’re looking for in a story. Here’s how the scripts from the two writers stack up against one another…

Instances of the heroes using their superpowers:
Chaykin: 29
Meltzer: 7*

Instances of heroes calling each other by their first names out loud
Chaykin: 6
Meltzer: 4

And the winner is…

Chaykin. His story clearly has more action and a wider scope befitting a team with so many of the world’s greatest heroes in it. While Meltzer has more heroes and some actual supervillains, he has much less for all of them to do. Also, note the fact that although Meltzer has 36 different scene changes, there are only five different settings, so the scene merely jumps back and forth between the same three places (with two more settings appearing in the Vixen and Geo-Force digressions). And man, just look at the narration boxes category. JLoA is one hell of a chatty book. Meltzer may even out-narrate Kevin Smith.

**I’m counting as swear words “bastard,” “piss,” “ass,” “damn” and “hell.” Certainly these aren’t top-drawer swear words or anything, but I imagine to some of Superman and Batman’s youngest fans, they would count as swear words, particularly if they repeated them to their parents. Oh, and Roy Harper saying “@#$% you,” which technically isn’t swearing, but if you’ve ever heard anyone swear before, you’ll fill in the blank left by “@#$%” in your mind with the only word that makes sense in that context.
Posted by Caleb at 4:28 PM