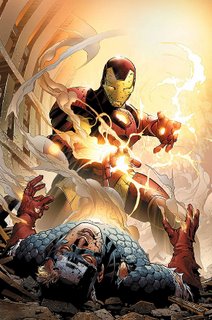 Why'd I Wait?: This book was originally announced and soliticted as a shelf-filler, something originally unplanned and unnecessary that was rushed into production to fill the holes in the schedule created by Civil War's delay. Thus, it didn't exactly scream "must read." And unlike another of the book's announced at the same time, this one had neither Ant-Man nor Howard the Duck in it.

Also, I have a prejudice against comics with more than one colon in the title. (In fact, I’m not exactly sure that is the title. That’s how it appears on the cover; according to the small print on the first page, it’s Iron Man/Captain America: Casualties of War #1. )

Well?: Christos Gage really blew me away with this issue, perhaps the single strongest piece of character work done this far in the line-wide "Civil War" storyline, which has spread across, I don't know, 13,000 pages of Marvel comics or so by now.

I'm not a life-time reader of Marvel Comics, and I've only been reading them for about as long as Joe Quesada's been editing them, so I can't site to you which issue of what comic had Reed Richards taking a principled stand against the Mutant Registration Act, but even a newer reader like myself could tell something was off about Mark Millar's story and characterization in the main Civil War miniseries.

One needn't have been reading Avengers since they found Cap in a block of ice to realize that Tony "Iron Man" Stark and Steve "Captain America" Rogers have been friends and allies so long that they're sudden turning on each other in the pages of CW seems pretty forced. Iron Man inall of his "Civil War"-related appearances has been decidedly un-heroic. Whoever's writing him in whichever story he’s appearing in, his behavior seems to run only between total dick and total douchebag, and he generally comes across as a less noble villain than, say, Dr. Doom or Magneto.

For his part, Cap's stand has been mostly principled, but by issue #4 and #5 of Civil War, the two characters didn't even resemble themselves from a few issue's prior. Like Cap’s joybuzzer trick in the chemical factory battle, or calling Tony a "pampered punk." What the hell, right?

Well, Gage presents both characters on equal footing here. Tony isn't the moustache twirling black hat he's been for months now, and Cap is neither the principled defector of the early "Civil War" period nor the angry, illogical Ultimate Universe version of himself he's been of late.

The pair meet alone and secretly in the ruins of Avengers Mansion and talk about the Act, their history, the "civil war," it's costs and their future. Both seem reasonable, both seem reluctant to fight one another and neither seems to want to fight the fight they feel forced into. It's pretty much one long conversation, with some fisticuffs at the end, citing plenty of moments of Marvel history along the way, and putting "Civil War" into a proper larger context, one that it's been lacking thus far.

Now, I'm not coming at this as a continuity geek, which is partially who this is presented for (note the last page, which gives issue numbers for the stories cited). I don't know Marvel history well enough to take its continuity seriously enough to be obsessive about it (DC continuity, on the other hand...). In fact, of all the events cited here, I think the only ones I actually read were the ones in Young Avengers, the destruction of the mansion in Avengers #500 and the battles in Civil War. Revisiting all this history gives the characters’ conflict an emotional resonance it hasn’t had yet, and I actually closed the book feeling more than a little sad for both of them (Up until then, I’ve just been waiting for Namor, the Black Panther, Thor and/or Hulk to finally arrive to beat the devil out of Iron Man and Reed Richards and put them in jail).

(From a marketing perspective, I have to imagine that this continuity conscious approach might also help move some trade paperbacks. The best way to handle continuity, in my opinion, has always been to acknowledge and respect it subtly, so that fans who know it feel rewarded for knowing it, and those that don’t won’t be left confused. In that respect, it might have been helpful to mention not only the particular issues in the endnotes, but the trades some of them have since been collected in as well).

The art by penciller Jeremy Haun, inker Mark Morales and colorist Morry Hollowell (the latter two of whom are also working on Civil War, which gives this tie-in a sense of visual continuity with the main series, and also proves a little worrying…don’t they have any Steve McNiven pencils to be working on yet?) and is quite top-notch. Gage’s story gives them plenty of opportunities of neat stuff to draw too, as pretty much every suit of Iron Man armor and every variation of Cap’s costume gets at least a panel here.

All in all, this is a very strange tie-in to a event comic; one that actually seems more relevant and better written than the event itself. I’ll be interested to see where Marvel ends up collecting this, as it seems to be one of—if not the—most essential tie-in so far. Not bad for a book the company hadn’t even planned until the main series became delayed.

Would I Travel Back in Time to Buy it off the Shelf?: Nah, it's only been a week, after all.
Posted by Caleb at 1:59 PM

Just wanted to comment that I am with you whole heartedly. The fact that Marvel used this as a filler, and it was just someones idea for how to fill some time between issues. If this issue had been written to occur between two earlier issues I think Civil War overall would have been more understandable, and there would be a few more "I'm on Tony's Side" supporters