Other places on the Internet you can go to

I have a review of Matt Kindt's 3 Story: The Secret History of the Giant Man over at Blog@, if you'd like to read it. In preparation for writing the review, I re-read Kindt's Super Spy and spent some time poking around his website and blog. As it turns out, there is a whole lot of great art on both.

I wanted to call attention especially to some of the superhero artwork he's posted, as it's probably not at all what people think of when they think of Kindt (just as Micronauts fans probably don't think of Kindt as their go-to guy for sketches...but surprise!).

First, check out his Green Lantern, which was apparently a commission: 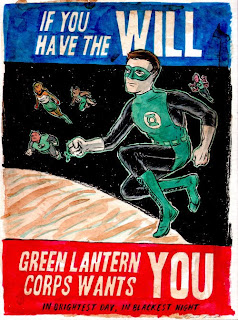 (Bigger and better version at his blog here).

I'm not a fan of the modern trend in superhero comics of depicting every character like a well-sculpted body-builder, so I always like it when an artist draws a superhero with a slimmer build...or even just doesn't define each and every swollen muscle through the hero's costume.

I love the boots on Kindt's Hal Jordan, too. The laces make them look like the sorts of boots professional wrestlers wear. Now I suppose Hal Jordan's boots, like the rest of his costume, are ring-generated matter that simply appears on him, and thus he never needs to actually put his boots on, and thus laces are unnecessary, but they still look cool, dammit (Actually, this is something I've always wondered about: Do Green Lanterns create their costumes out of the matter their rings allow them to generate, or do they use their rings to transmute whatever clothes they happen to be wearing at the time into their costumes? I would think the former, and I think Geoff Johns even implied that early in his run when he talked about the heat emanating from the energy in Hal's costume, but the latter makes more sense from what I've seen over the decades of Green Lantern comics. Because if it was the Lantern's will alone that maintained the costume, then wouldn't they suddenly become naked every time they lost their concentration or got knocked unconscious*?)

Okay, let's look at one more together, and then you can go peruse Kindt's sites on your own if you like. The front and back covers of his Super Spy featured two spy characters, each seemingly trapped within the confines of the cover as if it were a box, with little cutaway bubbles penetrating their clothing to show the various spy gadgets they have on their persons.

If you haven't seen it—and while I didn't love Super Spy, I really think it's well worth a look—the covers look like this: 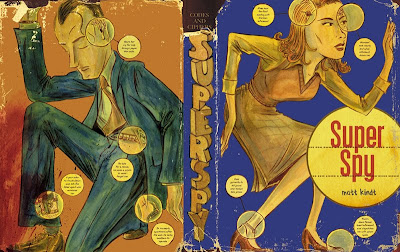 (Just fold it in your mind on the spin where it says "Super Spy").

Here's a super neat-o image of Spider-Man from Kindt's portfolio, putting Spidey in a similar pose: 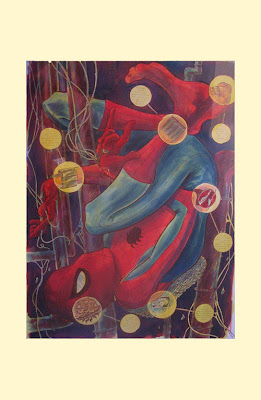 *Actually, I don't want to name names or anything, but I bet some Green Lantern fans would prefer that this happen more often.
Posted by Caleb at 2:27 PM

And yes, it WOULD be nice if Green Lanterns lost their uniforms when they were knocked unconcious. In Hal's case, that would be several times a day.

Kindt always has tons of these original artworks at conventions, and is great about taking commissions (I've never done so, but he sems like a great guy, and I would urge anyone who can to do so).

Two Sisters is great. Thanks for the review of the new book...