Namor, The Sub-Mariner generally wears one of two outfits—a green, fish-scale Speedo or a black pantsuit with a short-sleeved, open-chested top and bat-wings.

Why is he always showing so much skin? Is he an exhibitionist? Is it really hot underwater? Is that the style in Atlantis? Or could it simply be that Namor has a really hard time finding clothes that fit him and complement his unusual body type?

See, as artist Carl Pfeufer demonstrated in "Terror of the Boiling Sea" from 1943's Marvel Mystery Comics #42, Namor has an incredibly broad back, 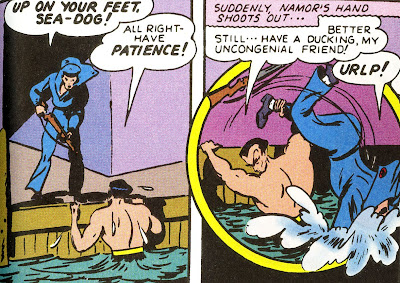 and a tiny, thin little face, which swells into a gigantic, triangle shaped forehead. 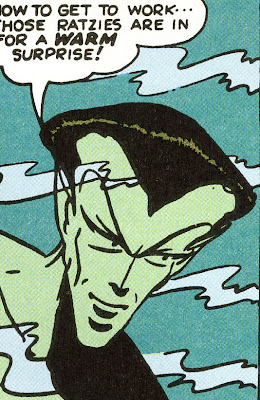 No wonder he just put on the first pair of swim trunks he could find and left it at that, rather than trying to find a sharp looking shirt that his deltoids didn't shred every time he tried throwing a Nazi, or wouldn't make his head look more wedge-like than it already did.

It's not like Namor spent the entirety of the Golden Age in a pair of swim trunks though. He'd occasionally wear clothes, for one reason or another, and he occasionally made them look good. For example, Namor in a sailor suit—

Not bad, eh? That's from the same Pfeufer story the above panels are from, and it certainly seems to have a slimming effect on Namor's hot air balloon torso.

He wasn't too happy to get into those clothes, though.

You see, in "Terror of the Boiling Seas," Namor witnesses a few American naval ships being destroyed and their sailors badly scalded when the seas suddenly begin to boil. When he investigates, he finds submerged heating discs underwater, capable of generating enough heat to boil the seas. He follows the cords to an underwater Nazi base, and, in order to get close enough to the Head Nazi in Charge, he must don clothing:

He might not like wearing a Nazi sailor's suit, but I think it's very becoming, and the hat hides his grotesque forehead. Disguised thusly, he's able to eavesdrop on the dastardly Nazis, and think sarcastic thoughts about them: 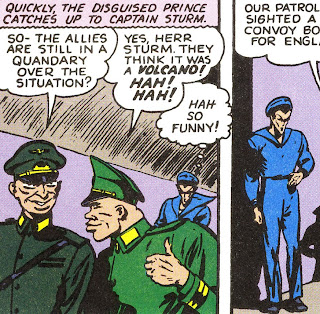 Namor's not so hot at undercover work, of course, and when an officer asks him what he's doing, he can't help but respond defiantly,

which results in the officer calling him "Swinehund! Backtaler!" and pistol-whipping, well, luger-whipping Namor off the dock and into the water with a splat.

Rather than resurfacing, Namor takes off all his clothes, rips open the door to the secret base, drags the heating discs inside, beats up everyone inside the base and then, when they next try to turn on the heating discs, they inadvertently turn their own undersea base into an exploding inferno.

A mystery unraveled, a Nazi plot foiled, hundreds of enemy soldiers killed, and Namor owed it all to clothes!

After the war, Namor continued to flirt with garment wearing, at least according to The Golden Age of Marvel Comics, which collected not only the above story, but also the simply titled story "The Sub-Mariner" from 1953's Young MEn Comics #24, by Namor's creator Bill Everett.

In this story, a half-dozen cargo ships have all sunk near a coral reef off the shore of a tiny island, for no discernible reason. Investigators find that the strips have had their cargo stolen and are all stripped bare.

Namor's old girlfriend Betty Dean reads about it in the newspaper to her roommate, who is engaged in doing her hair while wearing only a slip:
Both Betty and her roommate are attractive, by the way, as the narrator is sure to point out upon their introduction.

Betty decides to give Namor a call about these ship-sinkings, and she spends a few word-packed panels telling her roommate all about Namor and his origins.

Everett produces this panel, of a highly polished Namor, reflecting the bright Antarctic sun off his bare torso: 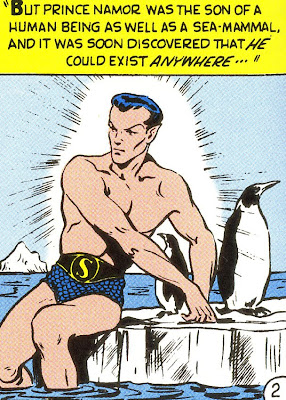 Note the Avenging Suns new swimsuit, an intermediary suit between his Golden Age swim plain blue swim trunks, and the green fish-scale ones he'd wear when fighting the Fantastic Four. 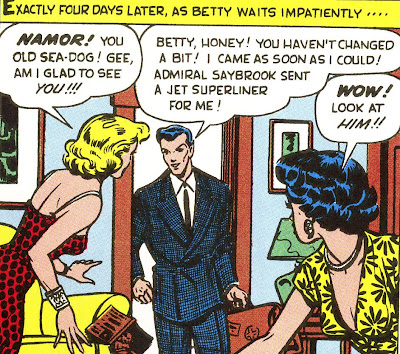 Betty's roommate obviously approves, in the very next panel she shouts "Whatta hunk of man!" as Betty and Namor make plans to parachute onto the island to investigate the sinkings (Sadly, she gets airsick, and must be left behind).

On the island, Namor discovers that a small band of robots are responsible for the sinking and salvaging operation, and Namor asks Betty, her shirt as unbuttoned as far as possible, to call it in.

The Navy doesn't buy it. "LIsten to this crackpot report! Some gal's gone off her rocker," says the message receiver, "Bah! She's crazy! Request denied!!" says the guy in charge.

Betty's so mad, she just might spill out of her top! 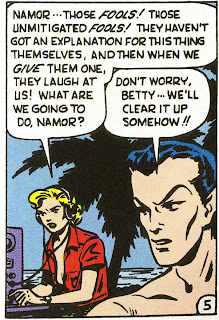 Namor tries to reassure her that they'll think of something.

Let's see...how to deal with this robot invasion without the help of the Navy... Hmm...
Oh yeah! Violence!

Namor destorys a bunch of robots, plays possum so they'll take them to their leader, learns they're actually an invasion force from Venus, buries them under a mountain of coal from one of the cargo holds, digs a small hole for them to escape from so that they can only leave single-file and then slaps each one's head off as it comes out until they agree to surrender.

Their leader does so, but as soon as Namor brings him on to the island, the ship blasts off for outer space, and the captured robot collapses dead, its electronic signal shut off.

The Navy's still not sure what to believe, but they search for evidence of Namor and Betty's story anyway. Meanwhile, our hero and his friend have donned matching outfits!
Aw, isn't that adorable?

Clothes didn't really help Namor on this adventure at all, at least not with the robot-fighting, but they did help him make an impression on the ladies, and show his close-ness to Betty at the end there, so, once again, we see clothes have exerted a positive influence in Namor's life.
Posted by Caleb at 8:21 PM