Radical Comics’ Incarnate #2 was released earlier in the month, on October 6, but I just wanted to take a minute to point out I’m continuing to enjoy it a lot more than I expected to prior to actually trying it.

The involvement of a kinda sorta celebrity, the weird tangle of credits, the multiple covers (many of which don’t reflect the contents at all)…on paper, Incarnate seemed to suggest one of the many ambitious Virgin Comics miniseries, the bulk of which ended up being pretty terrible.

But, um, also on paper…like, the paper it was actually published on? Incarnate is really not bad at all.

I like the $4.99-for-56-pages format and the fact that it has a spine like DC’s old prestige format books (the end result being you can stand it on a bookshelf with trade paperbacks if you want, making it a more versatile format to live with once you’re done reading it and have to find a home in your home for it). I like all the ads being house ads, and appearing only in the back, after the comic itself is done (Aside: How is it that Radical can afford to publish so much comic for so cheaply, and to not sell any advertising, whereas DC and Marvel can’t? Or is it just that the two biggest publishers in the direct market don’t want to, more than can’t?)

I also really like the colors, something I tended to not even notice until the last few years, when computer coloring effects got so completely out of control that I can barely stand to read many books, and the default mode for whole lines of comics tends to be dark, muddy and tightly photo-referenced.

The art in this book, which seems to be provided manga studio style given the strange credits (a penciller, an inker, a colorist and three credited “art assistants”), is nice and flat, and the design is simplified and cartoony, and the coloring works with that.

Despite the Jo Chen cover, this insides of this are a comic book that looks like a comic book. Random panels wouldn’t, couldn’t be mistaken for stills from videogames or album cover art.

The story is moving extremely quickly, and parts of this issue seemed to be setting up a sort of ongoing premise, so I’m somewhat confused by the fact that it’s actually two-thirds over…unless writer/artist Nick Simmons and Radical are planning on the series of mini-series model.

The character Mot, a “revenant” (which here is a sort of immortal, vampiric creature) and his friend have been captured and fitted with special obedience collars fashioned from the bones of other revenants (since only revenants can hurt and kill other revenants). They are both under the control of a rich young spoiled blond teenager, who forces Mot to attend her school with her and act as her bodyguard.

Also, she might have a crush on him. And also, he might be attracted to her, despite denying it.

See? Not a bad premise for, say, a manga series.

In this issue, the revenants are much further differentiated from vampires than they seemed to be last time around. There’s a goth-punk female one who sprouts six big black bird wings from her black, another which has all kinds of insect-like body-parts hidden beneath his clothes and skin, and one named Anubis who transforms into something like this: 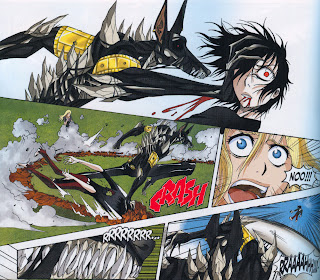 It’s a pretty neat design, one that looks like what one would expect a character named Anubis to look like, but it simultaneously looks unlike any version I’ve seen before. (Note the ditch he digs with Mot’s face as drags it around the ground above).

Even Mot himself seems to conceal a more alien, monster form: 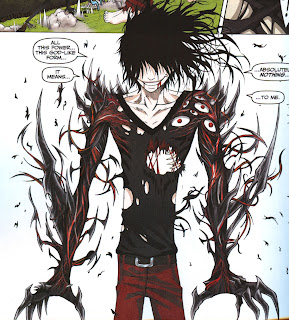 And it's two-thirds over, so it only has to stay good for about another fifty-some pages!
Posted by Caleb at 4:35 PM

I would have completely ignored that book based on the cover, but that interior art is pretty nice.

He likes it so much he doesn't bother to spell the title right!

I don't understand the habit of using cover art that is drastically different from the interior art. If you like the cover art, but the interior style is completely different, wouldn't that turn you off?

He likes it so much he doesn't bother to spell the title right!

T o answer Caleb's question, Nick does intend for there to be more Incarnate miniseries, continuing the overall story. This is just the first miniseries for him.

Regarding the cover, which this title only has one for each issue, companies do it because a big name cover artist helps to sell more books. Unlike other companies, Radical has great interiors to match the cover as oppose to some companies that have a pretty cover but once you open the book...eh.

This serie is plagiarism ! Don't support these authors !

Hey gang. I found a couple of comments on this post to be moderated the other day and, since this post is like four months old, I just assumed they were spam and deleted them.

Apparently there's been some news on the Boy This Looks An Awful Lot Like Bleach front—as I saw at http://robot6.comicbookresources.com/2010/02/radical-halts-nick-simmons-incarnate-amid-claims-of-plagiarism/ earlier today—and, I don't know, maybe Bleach fans are googling reviews of Incarnate and posting in the comments section of 'em now?

At any rate, I'm not terribly interested in re-reading or re-writing or deleting my review, so I'm gonna just leave it alone.

For the record, I've never read Bleach and was and continue to be ill-equipped to judge whether Incarnate is inspired by, an homage to, a rip-off of of Bleach, or if the similarities mean that it's full of swipes, full of coincidence or whatever.

That was a weak response, Caleb. Does anyone want you to read Blech or criticise you because you wrote this review months ago before Simmon's was revealed to have plagrised Bleah and MANY other artists? My guess is no.

There are images easily available that will show Incarnate panels superimposed over Bleach ones and the apparent tracing by doing a simple search of "incarnate comic plagiarism". It doesn't take a whole load of searching.

It would have taken less energy checking out those pics for yourself than it would have to write your sub-par follow-up comment. Yet apparently, you found it better to write that weak response than to write an intelligent and informed one.

Btw, if you didn't know your review is linked on the Incarnate page on Radical Comics site under the reviews tab. That means no rooting around Google for your blog required, my friend; they have affiliated themselves with you. I'm sure even you can deduce that Bleach fans (and fans of the multiple sources Nick stole from) probably want to get the word out there as much as possible that this comic isn't just influenced by Bleach but directly copied from it and other sources. It really doesn't take a genius to guess good way of doing that is to inform people who have reviewed Incarnate.

Someone without knowledge that Incarnate is a rip-off can access your glowing review and may well be swayed to purchase this; thus lining the pockets of a plagiarist. From reading your follow-up comment and by keeping your review up (without any note about the copying before or after the it), you clearly fail to see that though.

I think it's safe to assume that EDILW doesn't have a single reader who doens't also read any comics news sites at all (or helll, The New York Times), and all of them have covered the plagarism charges. The news site I write for, Blog@, did a piece on it, so I didn't write one there. So I think there's little danger of my review selling issues of Incarante all on its own.

Also, if Radical's suspended publication of the book, is that even an issue at this point?

I'm not sure what you want...do you want me to delete the review? I don't see how that would help, and it seems disingenuous, since I wrote it a couple months ago, not last week.