Not comics: So I just saw the movie The Flock that isn't based on the novel about killer prehistoric birds... 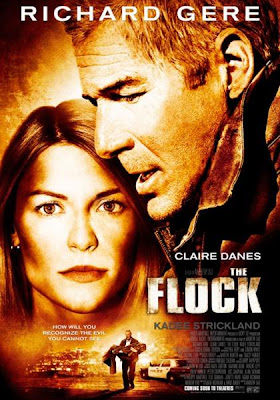 In the summer of 2009, I wrote at some length about the 2006 prose novel The Flock, in which writer James Robert Smith imagined a highly-evolved, relic population of giant, carnivorous ground-birds coming into contact with human beings for the first time in modern Florida.

At the time, the book had just been optioned to be made into a film, and I mentioned that there was already a film entitled The Flock, a 2007 drama by director Wai-keung Lau. During my last trip to the library, I saw a DVD for this The Flock on the just-returned shelf, so I picked it up to watch while drawing one night.

Sadly, it is 100% completely devoid of killer birds. In fact, I don't think there's a single bird in the entire movie. There are a couple of killers in it, though.

It's about a completely obsessed (to the point of being pretty much insane)registrant administrator of the Department of Public Safety, whose job it is to keep tabs on registered sex offenders (the title refers to the flock of registrants he tends). Forced into early retirement, he is partnered with his replacement for a while, in order to train her. Eventually, they stumble onto a case of a missing girl, and he's pretty much the only one who can solve it, but no one wants his help since he's cried wolf so many times. And is kind of insane.

It's basically a bit like an episode of Law and Order: SVU with higher production values, more disturbing imagery and scarier villains.

It stars Richard Gere and Claire Danes. I can watch pretty much anything with the latter in it, as I love looking at Claire Danes and the sound of her voice, and since my Summer of The Mothman, I've been particularly interested in Richard Gere movies. Like, I sometimes half-pretend in my head that he's John Keel when I see him now, so as I was watching this I imagined Claire Danes and John Keel teaming up to save a missing girl from scary corpse-porn pornographers/serial rapists/serial killers (Imagining that Gere is Keel can have interestingly transformative effects on a film; it certainly made Hachiko: A Dog's Tale a different viewing experience than it otherwise would have been, and I'm kinda curious to rewatch Pretty Woman now...).

No birds at all?