The original, 2009 Lockjaw and The Pet Avengers series was an extremely Marvel Universe-dependent affair. The cast, of course, was comprised of various animal heroes associated with various Marvel characters—The Inhumans’ teleporting bulldog Lockjaw, X-Man Kitty Pryde’s dragon Lockheed, The Falcon’s falcon Redwing, Ka-Zar’s sabre tooth cat Zabu, Speedball’s cat Hairball, a frog with Thor’s powers and costumes called Throg and Ms. Lion from Spider-Man and His Amazing Friends—and the plot involved them going on a quest to assemble the Infinity Gems before cosmic villain Thanos could put them in his gauntlet and rule the universe or whatever.

The 2010 sequel series, Lockjaw and The Pet Avengers Unleashed (Get it? Because two of them are dogs, and dogs wear leashes?), is much less dependent on Marvel continuity, and perhaps ironically, seems a lot more reader friendly—at least up to a point.

The conflict in this outing is that half-frog, half-god-like superhero Throg feels out of place, neither true frog nor true god, but finally finds acceptance among his fellow mythological creatures, like the Yeti. In doing so, he stumbles into a world where such fantasy creatures have all been sent, a world where they’re under threat by a mysterious, unseen foe.

When Throg leaves Earth, his old teammates must reunite and try to find him, and, along the way, earth gets invaded by fantasy animals and, later, the things from their world that were harming them in the first place.

Writer Chris Eliopoulos’s plotting is fairly strong, though the twist at the end seemed a little tired and overused to me, as well as coming a bit out of left field (Of course, if this is a kids comic, I don’t suppose it matters so much if many other stories have similar elements, since this may be the first time in their younger lives they’ve encountered it). The characterization of some of the principals helps sell it all quite well, and I think the story is actually at its best when we’re just sort of hanging around Ms. Lion and Hairball as they attempt to be animal superheroes in New York City.

That pair has, by far, the most defined personalities among the cast members, even if their personalities are sorta simple—Hairball, the cat, hates the dog; Ms. Lion, the dog, is dimwitted and enthusiastic—and they get the most panel-time.

In fact, one of the weaknesses of the scripting is how unnecessary much of the cast seems. If Redwing, Lockjaw and Zabu weren’t in this comic at all, it wouldn’t change a thing—their few lines would just be spoken by someone else. That’s a challenge of writing team comics—especially super-team comics, as teams as stacked with powers as, say The Justice League and The Avengers really shouldn’t need to have folks like Superman or Sentry standing around constantly—and I guess it holds true for team comics featuring superhero animals.

Ig Guara’s art is, again, superior. He draws perfectly realistic animals, but without sacrificing their ability to emote in ways that seem both animal-like but easily readable. And Big Two super-comic artists who can do very realistic while still maintaining the vibrancy of a living, breathing, done-by-human-hand drawing are increasingly rare.

Much like the first volume then, this is pretty fun all-ages adventure; a not-great comic with an awesome premise and extremely polished execution that make a few flaws seem particularly forgivable.

I read this story not as it was originally published, in serial comic book form, but in a trade. I read the original series in comic book form, and regretted it when I saw all of the nice variant covers that were being produced for it, variants that I assumed were included in the trade.

So this time I waited for the trade, so as not to miss out on Robert Langridge’s totem poll variant or this neat dogs-playing poker riff. I know the incentive for doing variant covers at all is that it helps the publishers sell more books to their retailers, but it has the opposite effect on me, and I wonder if it incentivizes trade-waiting among more readers than it manages to sell issues to readers? (It’s such a weird business model really, with publishers selling to retailers, not readers, and retailers selling to readers, so the publisher/reader relationship isn’t as important as it might be otherwise).

The advantage of my waiting for the trade is that I did indeed get all the covers without having to buy two copies of some of the issues, and I also got two other, shorter stories.

The downside? Marvel published the trade at a smaller, not-quite-digest size, which didn’t serve the art and thus the comics all that well, since they were created for the larger dimensions (which I’ve already discussed a bit here).

So I’m afraid I still can’t quite figure out the best way to read these things.

The serials come out more frequently and are at a size more complimentary to the content, but they’re also full of ads, missing some content (variant covers, at the least) and, in most Marvel cases, are more expensive.

The trade is generally cheaper, has more content (here, variants and back-ups) and can be purchased without a trip to a comic shop (45 minutes, for me), but (again, in this particular case) the artwork is ill-served by the size.

The first is by Eliopoulos, writing and drawing, and was originally published as part of the $4 Tails of the Pet Avengers: The Dog Days of Summer one-shot, from last July. It’s actually a Franklin Richards, Son of a Genius story, drawn in Eliopoulus’ Bill Watterson-inspired style, and starring Mr. Fantastic and Invisible Woman’s young son, and his robot nanny HERBIE.

The inadvertently create a giant garbage monster, and the Pet Avengers show up to help.

It’s a pretty fun, funny little story, and it was a pleasure to see Eliopoulos drawing the Pet Avengers. Check it out: 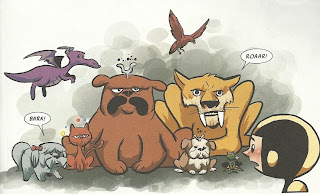 He also does an excellent job with Puppy, a puppy with similar powers to Lockheed (and a similar tuning fork on his head), really capturing the not-giving-a-fuck of certain dogs. 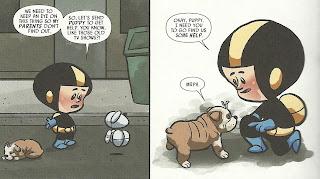 Finally, there’s a four-page short entitled “Hulk-Pet Avengers,” which gives us an opportunity to see another artist’s take on the characters—that of Dario Brizuela. 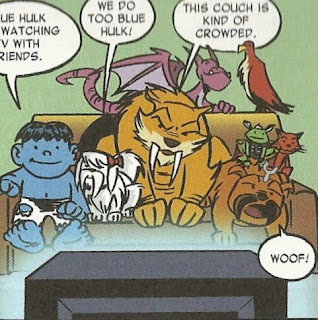 This one’s written by an Audrey Loeb, whom I believe may be related to that other comic book writer named Loeb (it would certainly explain why this not at all funny or even very good story got published), and, like so many comics written by people named Loeb, it’s sort of a nonsensical mess.

A little kid Hulk who is blue—Blue Hulk apparently only exists in these shorts, where he tends to hang out with Red Hulk and (Green) Hulk, neither of whom are present here—is hanging out and watching TV with the Pet Avengers. Here, they can talk to non-animals, like Blue Hulk.

Actually, all of them can talk, even Lockjaw, who can’t talk, even to other animals. It’s…it’s just weird, really. Like someone in old time Hollywood writing a script for a short film featuring the Marx Brothers, and including plenty of lines for Harpo.

Anyway, the TV watchers see an ad for some place called Ice Cream Mountain, which is apparently a literal mountain of ice cream, and then they try to go there, but talking Lockheed’s teleportation powers get scrambled by lightning, so they teleport to a few other places first, on the way encountering the Red Ghost’s Super-Apes, which is kind of cool, I guess.

(Disclaimer: If Audrey Loeb is Jeph Loeb’s young daughter and only, like, a grade schooler or something, I apologize for being mean. If she’s over 18, then never mind—it’s just the story I’m judging, not the person, obviously. And the story is no good.)
Posted by Caleb at 6:52 PM

Lockheed can talk. He just doesn't choose to most of the time. Agent Brand even understands his language. And he talks in the 3rd mini-series, which involves Fin Fang Foom and even more dragons...

Audrey Loeb is indeed Jeph Loeb's daughter. I always assumed that she was in grade school as well (from seeing those back up strips), but after looking it up now and seeing some photos, she is probably in her late teens already.

Aaugh, sorry Lurker. I knew that. I meant Lockjaw, not Lockheed in that sentence. Lockjaw only woofs and makes dog noises in these stories, and cocks his head at the others, right?

In her back up, he can talk. Although he only talks after getting hit by lightning, after which point he talks like a Hulk, so maybe that was a result of the lightning blast, but its not commented on by any of the characters.

I'm really looking forward to the trade of that third series...

Yeah, I'm pretty sure the only time Lockjaw was shown to talk was during the whole "Lockjaw is a normal Inhuman not a pet" thing that got retconned away as a joke...