What is 2 Headed Monster Comics? It’s the name of a self-publishing “label” producing work by writer James Moore and artist Joel Jackson, based in my former base of operations, Columbus, Ohio. They have a cool logo.

So far the pair have produced a pair of comics, both featuring slick, accomplished, professional production values, and varying degrees of quality. The lowest degree seems to be Pretty Good, and the highest degree seems to be Quite Good, so I think this is a creative team that will bear paying attention to.

My favorite of their works so far is The Toyetic Adventures of Coco Fiasco #1, a broad, silly, simple but very fun and rather cool riff on a few of the more omnipresent aspects of Japanese pop nerd culture.

The book opens 50 miles off the coast of Japan, where some vaguely Toriyama-esque drilling robot vehicles are making a whole bunch of noise, awakening a giant monster who, naturally attacks Japan in retaliation (The monster is big and green and Godzillan, but differs by having a bunch of red eyes, a bunch of jagged teeth, a long Venom-ous tongue and some Doomsdaily bone spikes.

Pink-haired school girl Tilly and her pet pig Puerco Bueno are on their way to school when the monster attacks, causing Puerco to spout wings (His “pigesus form”) and Tilly to initiate a magical girl transformation sequence that turns her into the title character.

She fights the monster until it’s defeated.

That’s not a bad thing.

Jackson’s artwork is flat and full of sharp lines, his style cartoony. His human figures have huge heads sprouting from tiny necks atop thin bodies; button eyes and big expressions are the rule.

There’s nothing subtle about his “acting,” but given the anime/kaiju parody elements, there isn’t really supposed to be. I can see his figure-work being something of an acquired taste among a lot of readers, but there’s no questioning his design chops—the monster, the gadgets, the vehicles, the buildings…everything looks cool. 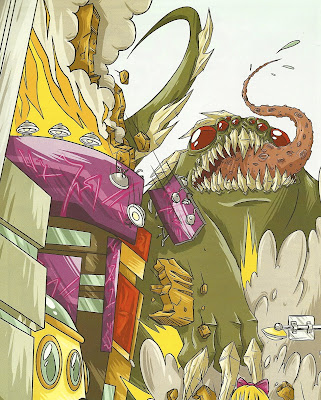 The eye-popping color, provided by Jackson and a Danielle Bailey, help a lot, giving the book a Saturday morning vibe.

Despite what may seem like a rote premise, Moore and Jackson pack in lots of little jokes. Some of them original, some tried-and-true gags (I, for one, never tire of funny sound effects, or descriptive sound effects of the sort Art Baltazar and Franco employ in Tiny Titans, like, say, the sound of a notebook being put into a book bag being “Put!). 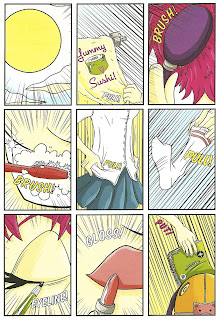 There’s a #1 on the cover, a story title within (“This is our emergency!”), so it’s quite possible there will be another issue somewhere down the road, but if not, that’s fine to—the book functions perfectly fine as a clever little done in one.

Radio Free Gahanna similarly works just fine as a standalone, done-in-one tale, but a quick look at the creators’ website reveals a #2 is already in progress.

This is a sort of coming-of-age/quarter-life crisis tale of a twenty-something college drop out with a dream deferred, a dead-end job and a distinct lack of romance and purpose in her life. It’s set in Gahanna, which—for my readers not familiar with Central, Ohio—is a suburban city within the same county as Columbus, Ohio (Of note beyond the region for the appearance of an ABC/phantom animal, one of Loren Coleman’s top-ten cryptozoology stories of 2004)

Why I found that less engaging may have something to do with the fact that it’s more-or-less my daily life (although I’m a boy, not a girl. And I got my degree. And live in a different dead-end Ohio city. And am now past my quarter-life crisis and working on my third-life crisis. And…), or it may just have to do with the fact that I’m easily amused, so giant monsters, giant robots and talking pigs delight me more easily than drama.

This comic is black and white, and Jackson uses photo-reference to create some of the backgrounds, and to plot certain photographic elements into certain panels. The characters remain rather cartoony, but almost everything else is more grounded and realistic, as befits the story. 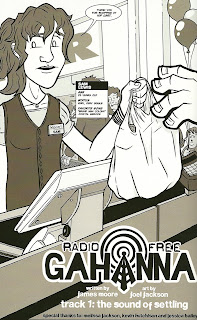 The characters are introduced by Scott Pilgrim-esque boxes revealing character names, ages, statuses and favorite songs, and we follow the main one of these, Sam Lewis, through a day and change of her life.

Part of that day includes finding a pirate radio station, and she feels a kinship with the person talking over the airwaves. She eventually realizes why.

As I mentioned earlier, this actually works quite well as a single story, as the cliffhanger ending simultaneously functions as a happy ending. It doesn’t solve all of the realistic problems in Sam’s life, but it’s something good, something to reverse some of the negative momentum of those problems—it’s the sort of happy ending that occurs in real-life.

I confess to hating two pages of it, though: 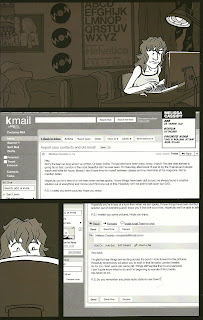 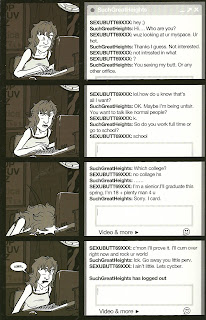 Particularly that first page, as it introduces a character via her e-mail and, well, I spend too much of every damn day looking at e-mail anyway.

Note the company behind K-Mail, though. That’s the same company that runs the supermarket Sam works for and whose drill-bots awoke the monster in Coco. Kip Co., a corporation behind everything in their comics (There’s even a fake ad for it).

Don’t let me talk you out of Radio Free Gahanna, however; it is still a pretty good, impressively made comic. I just liked it less than the other one, and, as I said, some of that could be me—it seems like a younger person’s comic, both in its content and its interest in and discussion of music (Even though I like all of the bands Moore sites in his afterword, with the exception of The Promise Ring, whom I’ve never really listened to for longer than a song in someone else’s car here or there). This issue is named after a Death Cab For Cutie song, and Moore has little essays about a Death Cab album and The Postal Service, for example.

If you’re interested, both books are on sale at various comic shops and record stores around Columbus and the surrounding environs, or you can buy ‘em through the creators. They’re $3 a pop.
Posted by Caleb at 5:12 PM

Hey! Thanks for taking the time to review us.I really appreciate it, especially the level of engagement and perceptiveness you brought to our work!And it's good to hear from a former Ogre shopper (after Discount Paperback closed it's been my store and they've been great supporters of my work).

And now more bonus info than you probably want


I love that you picked up on the Toriyama influence, as he really is one of Joel's favorite artists (and after borrowing his copies I think Dragon Ball pre-Z is an underrated masterpiece).

And I know everyone's going to have a different favorite, I just hope the craft comes through.

For what it's worth I was 22 or so when I wrote the first half of the first draft for RFG 1. It sat on my computer until Joel and I started our collaboration (I was about 26/27)so the bones of it are a younger man's work. Issue 2 will be out at S.P.A.C.E.

RFG is plotted in the style of short British sitcom season. And I kind of think of the individual issues as like pop songs (so I'm thrilled to hear it works as discreet unit).The plan is 7 "singles"that will make up the first "album." Conceivably we could do more albums if we want/don't die of old age/get hit by a meteor, but at least at that point you'd get a complete, hopefully satisfying story.

Cococ was designed as a one-shot for Packrat Comics mid-Ohio self-publishing contest (which we won) I was thinking along the lines of those strong self-contained stories from Warren Ellis (Apparat/Global Freeqency/Planetary) and Brian Wood (Demo/Local), but also like a great glossy,big-beat electro-pop single like something from Daft Punk/Robyn.

We still could do more (and I have ideas for how that would work), but I can't imagine we'll have time for it soon (unless *fingers crossed* we were doing this full time). When we finish RFG (or maybe take a break in the latter half)the plan is to do two more cartoon-themed one-shots and collect them in a book called Saturday Morning. One of those will be a sort of He-Man/80's fantasy movie/early Square RPG thing. And the other is kind of like my era of Nickleodeon-eaque (Pete & Pete to Invader Zim) cheeky, kind of surreal take on Lovecraft. Hopefully our hard work pays off and we can get to it all sooner than latter.