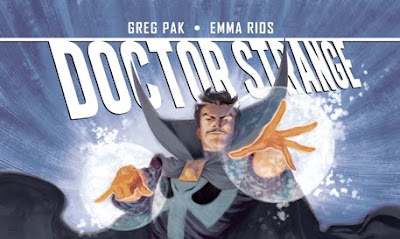 I am now contributing to Comics Alliance, a very good comics news site that I imagine many of you already read but if, for some reason, you don't, now you've got an extra reason to be doing so. I think I'll mostly be helping out with news and project announcement type things for the time being. I've written three posts so far, including this one on the passing of Joe Simon and this feature on Marvel's upcoming Doctor Strange: Season One, for which I interviewed Greg Pak and Emma Rios. I probably won't link back to every single thing I write over there, so consider this a heads-up regarding another place you can find additional writing about comics by me on the internet.

I'll continue to contribute weekly to the Robot 6 blog at Comic Book Resources as well. This week's column, which I linked to yesterday as well, was a bout Ragman, miracles, holidays and religion, but mostly about how cool Batman: The Brave and The Bold #14 was.
Posted by Caleb at 8:46 PM

I am glad you are getting more work writing comics, I like your blog and CBR is probably my fav comics site, so it's nice to have you there.

That's great. Caleb and Sims-- my two favorite comics bloggers since back in the Stone Age-- together at last!

Wonderful news. I do read both sites and will be looking for your stuff. They are lucky to have you.

Is your troll-y stalker going to follow you over there?
Let's hope so!

I knew I saw your name in a CA article a day or two ago! I'm glad you're getting more work as well. I find it easier commenting here than on CA though, because this is automatically linked to my gmail, and I never know to sign in as my facebook or my AIM or my gmail for CA. . .

I saw your byline on the Joe Simon piece the other day, and I was so excited (but also sad, because Joe Simon died). Anyway, congrats!

It's cool to see you on comics Alliance.