Yeesh, maybe I should start doing these columns once a month instead of once a week. The average number of comics I get during weekly visits to my local comic shop seems to be just two (2) now.

Daredevil #6 (Marvel Entertainment) This is the final issue of Marcos Martin’s, which would probably make this a perfect jumping-off point, were it not for the continued presence of pencil artist Paolo Rivera, who was alternating arcs with Martin.

The story is concerned with Daredevil resolving the conflict that threatened the life of his latest client, which involves fighting on a very strong super-powered villain with an interesting hidden power and the refreshingly juvenile name of Bruiser.

As always, Martin is incredibly inventive in not only telling the story, but in finding ways to convey Dardevil’s super-senses and radar power through the language of comics.

Let’s take a moment to praise the work of Muntsa Vicente, color artist, however.

This book pops, and a large part of its visual power comes formt he color choices. There is, for example, a nice splash-panel midway through where Dardevil comes to the rescue of the kidnapped Austin Cao. Look: 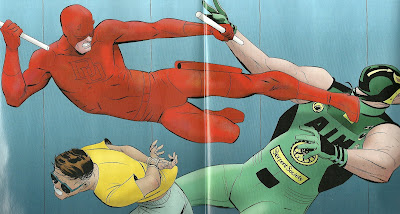 The glossy paper and the fact the image stretches across the fold leads to a pretty bad scan, but still you can see the red hero Dardevil kicking the green villain Bruiser, freeing the yellow-clad victim, in a blue hallway.

Martin’s designs are simple enough that the color is allowed to reinforce the lines rather than bury or otherwise obscure them. Later, for example, representatives of five different Marvel villain organizations assemble to witness an execution, and each has a different color or set of colors, sharply defining who they are and, more importantly, that they are different from and in opposition to one another.

Look at this colorwheel of a Mexican stand-off: 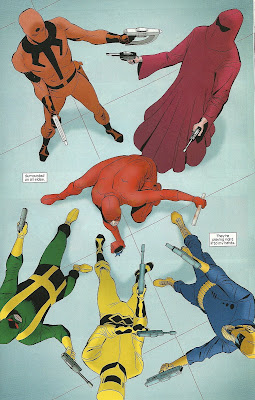 That is just plain comics art done right, from script to pencil line to color.


Tiny Titans #46 (DC Comics) In this issue, Art Baltazar and Franco reach back almost 30 years to find a super-obscure character to use in order to tell a joke only the parents or maybe even grandparents of the target audience of the book would get: The Protector, last-minute stand-in for Robin in a drug awareness comic published by the Keebler elves.

That’s awesome. Not only in the sense of “Wow, this comic is awesome,” but in the sense that it genuinely inspires awe how far Baltazar and Franco will go for a gag, particularly if its one that they can play both to brand-new readers and trivia obsessed comics lifers.

Some of the similarly double-targeted gags are of more recent vintage though. For example, apparently the mysterious purple-hooded lady from the last issue of Flashpoint, which transformed the DCU into the rebooted New 52 U, appeared in all 52 #1 issues. (I read five of those #1’s, and I didn’t notice her in any). A mysterious, purple-hooded lady appears throughout this issue as well, and I love the way Baltazar stops the narrative every time the figure appears: 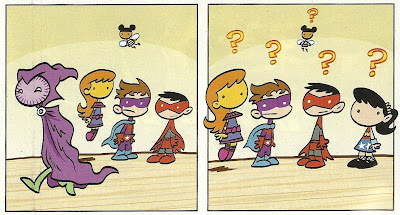 What most interested me this issue, however, was the fact that Talon, evil Batman duplicate Owlman’s sidekick, apparently has an evil Ace the Bathound duplicate: 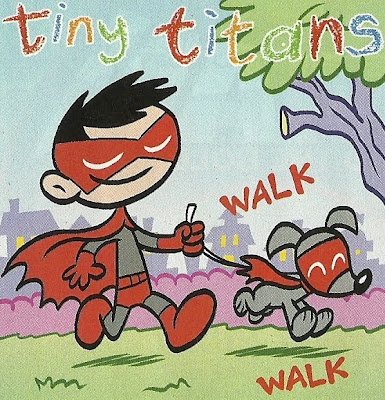 And it’s not just Ace in a red cape, as Ace appears in the same scene a few panels later with Batgirl. So who is that dog? Zero the Owlhound…? I MUST KNOW!!!!
Posted by Caleb at 9:05 AM