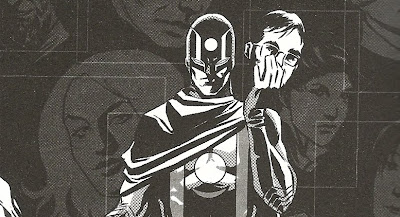 I have a review of Deepak Chopra's prose book The Seven Spiritual Laws of Superheroes up at Robot 6 this week. It's a fairly negative review, but I would recommend the book (as something you borrow from a library, at least). I think there’s a lot of fairly insightful stuff in it, and I don’t think it would hurt anyone to practice anything Chopra recommends. That is, I think the message is good, I just didn’t think it was delivered all that effectively, and it's essentially a confusion of two books between a single set of covers ( I do suspect "laypeople” might find it more engaging, of course, lacking the “that’s not how I’d do it” or “Storm’s powers don’t work that way” hang-ups some of us writers-about-superhero comics might).

Deepak's son Gotham Chopra, a name that may be familiar to comics readers from his involvement in the now defunct Virgin Comics, writes the foreword, and is on hand as the superhero expert throughout. In that foreword, he shares an interesting anecdote:

A couple of years ago when I helped facilitate a discussion at the San Diego Comic-Con between my dad and comic icon Grant Morrison, an audience member asked my father a question about "quantum consciousness." He turned and stared at me with wide eyes and a grin. I knew what he was thinking: He was among his own.

It seems like the younger Chopra brings that up in part to burnish his fathers superhero bonafides, but it's also true that there's a rather remarkable overlap between Eastern philosophy, science and superhero comics, as evidenced in the work—comics and prose—of the non-Chopra on that panel.

I like the image of someone with expertise in one field being sort of surprised by the interests and knowledge of some of the folks at Comic-Con, I guess. (Although, cynically, it does make one wonder if Chopra was expecting something else and, if so, what was he doing there, you know?)

I didn't really have room to get into it in the review, but the artwork in the book is pretty nice. The image above, which you can see in full in the body of the column at Robot 6, is of one of the several superheroes who appear at the start of each chapter, to illustrate the seven laws (That guy is from the chapter on transformation). I believe there are seven in all, with the super-lady who appears on the cover in color re-appearing in one of the interior full-page, black-and-white illustrations.

These were all provided by Jeevan Kang, one of the artists who illustrated some books for Virgin (7 Brothers, Devi, Snake Woman, Ramayan 3392 AD), although he's probably best-known for his work on Marvel's neat 2005 series, Spider-Man: India.

The heroes he designs for the book are fairly generic—the above, the gal on the front with a shimmery energy cape of some kind and the Iron Man-like guy at the front of the creativity chapter being the best and most distinct—but a lot less generic than one might expect in a book like this. It probably helps that Kang is a comic book artist illustrating a prose book, rather than an illustrator trying to ape comic book artist style for the book.

This is my favorite anecdote in the book:

"You know, Papa," Gotham started one mrening as we both sipped our coffee, "your story is a lot like Doctor Strange's."

I stared at him blankly. Was this a compliment or something else?

"Do you know the story of Doctor Strange?" he asked curiously.

I shook my head.

"I can tell you if you want," he smiled.

Surely this was his plan all along. I nodded, intrigued, and he began.

The Chopras have weird breakfast conversations.

The elder Chopra's story is like Doctor Strange's in at least one way. Strange began as a medical doctor, but turned toward sorcery and eastern mysticism after his surgical career was ended by a car accident.

I don't know enough about the particulars of Chopra's career to know if he was all that much like Strange in any way other than the fact that he was a medical doctor who at some point turned toward eastern philosophy and is now better known for that than for the work of his former life.

I like imaging Chopra wearing those neat-o yellow spotted gloves and big red cape with the pointy-collar though. Or imagining the Deepak Chopra of the Marvel Universe befriending Doctor Strange and talking about all that crazy Ditko magic and how it parallels certain aspects of Hindu philosophy and yoga or whatever. "What you call the Hoary Hosts of Hoggoth, Stephen, is really just another aspect of the universal consciousness," and like that.

The book ends with both Chopra's collaborating on a "Superhero Reading List" of "modern Western comics" that "have something to say about the spiritual laws that drive great superheroes."

It's an interesting list. I was all set to rag on it, as there are some pretty poor comics on it—I can barely stand to look at the pages of Invincible Iron Man long enough to read the dialogue balloons, for example, and the Dini/Ross Batman: War On Crime is nice-looking, but pretty run-of-the-mill for a Batman comic otherwise—but each is accompanied by a sentence or two that explains why each was chosen, making it harder to complain about.

For example, Chris Claremont and Frank Miller's old Wolverine comic gets "Even the greatest superheroes can't always contain their shadow selves," and All-Star Superman "No one knows quantum consciousness like Superman."

Also recommended for various reasons are Stan Lee and Jack Kirby's Silver Surfer, Ex Machina, Superman: Whatever Happened to the Man of Tomorrow?, X-Men: The Dark Phoenix Saga, World War Hulk, Spider-Man: Kraven's Last Hunt, The Death of Captain Marvel and Strange (The J. Michael Straczynski and Samm Barnes one, not the Mark Waid and Emma Rios one).

It's not a list I likely would have assembled, but I think it avoids any out-and-out stinkers or anything that makes superhero comics look as depraved and degenerate as they can often be, and it actually provides a pretty good sense of what the Big Two superhero comics field is like these days, mixing still-relevant and inspirational (to other comics) eighties comics with some generally well-received modern ones. That Silver Surfer probably sticks out the most as the one that is not like the others, and I wonder if it was included simply to get Lee to provide a blurb (Ha! I bet Lee would blurb anything if you asked him) or simply because of how well character embodies a lot of the stuff Chopra talks about in the book.
Posted by Caleb at 6:33 AM