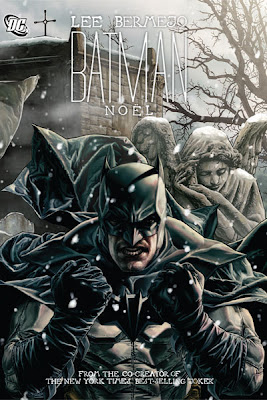 It’s easy to see the logic behind Batman: Noel, a new original graphic novel by Lee Bermejo, who teamed with writer Brian Azzarello to deliver the well-received, rather successful Joker graphic novel (Which I didn’t like, but it’s not like something selling a lot of copies and me not liking it is all that rare an occurrence).

In addition to providing a sort of visual sequel that allows DC to put “From The Co-Creator of The New York Times Best-Selling ‘Joker’” on the cover, the new $23, 120-page hardcover probably makes a decent gift purchase for bookstore shoppers looking for something to get the comic book reader or Bat-fan on their list.

Creatively, the logic behind publishing Batman: Noel makes little to no sense to me. It’s a pretty awful comic book, of the sort that makes one feel a little embarrassed for its creator while reading.

You can’t tell from the generic title or generic cover, but this is actually the inevitable Batman version of Charles Dickens’ Christmas Carol…actually, it’s at least the second.

Jeph Loeb and Tim Sale did a far superior version in 1995’s Batman: Ghosts—A Legends of the Dark Knight Halloween Special (a $5, 48-page book that was later collected with the other Loeb/Sale LDK Halloween specials in the 1996 Batman: Haunted Knight, which is a better trade with more story for less money than this goofy Noel book, Christmas shoppers!).

That transposes the basic structure of Dickens’ holiday classic so that it's essentially A Halloween Carol. A young Bruce Wayne seems to be embracing his role as Batman at the expense of living and enjoying his real life as Bruce. After the Penguin attacks him and he eats some bad sea food, he sleeps fitfully the night before Halloween.

He’s visited by the ghost of his father, then Poison Ivy, The Joker, and a mysterious cloaked figure and, upon waking to discover it was all just a crazy fever dream, he decides to spend a little more time as Bruce Wayne (This was the introduction of Sale’s incredibly idiosyncratic versions of Poison Ivy and The Penguin and, I believe, his first Joker story; all three would show up in his “Year One” era series with Loeb, Long Halloween and Dark Victory). 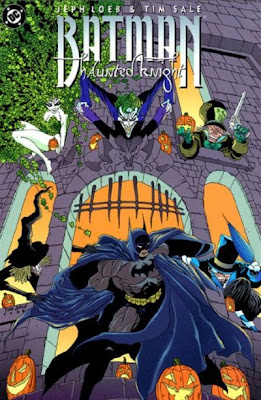 Bermejo, writing his own story, does the same "Dickens + Batman" premise, but in a very different way. First, it’s a Christmas story again.

Secondly, there’s no "it was all a dream" twist; that excused Loeb’s borrowing the plot from Dickens (Batman would be familiar with the story, and could have been dreaming along that template) and allowed for the artificiality of the plot reflecting that of the novel. The events in this story all "really" happen, although this is essentially an un-labled Elseworlds or Imaginary Tale, as Bermejo’s costume designs and continuity signifiers make clear.

Thirdly, the story arc is different. Whereas Ghosts saw Batman needing to rediscover the, um, Spirit of Bruce Wayne, Noel finds Batman needing to stop being a savage, scary asshole who never un-grits his teeth and doesn’t risk the life of an innocent boy by using him as bait to capture The Joker and, ultimately…not being that guy…? I don’t know; it’s not really clear. Bermejo basically presents Batman as a Frank Miller-inspired ‘90s-style Dark Knight, dialed up to eleventeen and, after his visitation by the “spirits,” he…well, he basically just buys Tiny Tim a Christmas tree and hires Bob Cratchit as a janitor at Wayne Enterprises. We're not privy to whether or not he's changed, as after capturing The Joker he promptly falls asleep and we don't see him conscious again in the book.

Most bizarrely, the story Bermejo tells through his images and dialogue is a Batman adventure which is parallel to certain elements of Dickens’ story...which is different from the loose adaptation of A Christmas Carol Batman: Noel offers.

For the former, Batman’s trying to catch The Joker, and is using The Joker’s bagman as bait. The bagman is the story’s Cratchit, and he has a sick little boy named Tim. Sick with fever himself and battling pneumonia, Batman thinks he sees the ghost of an unnamed dead Robin, in for Marley. Catwoman is in for the Ghost of Christmas Past (Her conversation allowing Batman to flashback in his mind to the past), Superman is in for Christmas Present (his superpowers allowing him to fly Batman around and show him stuff) and The Joker in for Christmas Future, burying Batman alive, so that our hero can hallucinate the future (Before ultimately fighting his way to the surface, as in the conclusion of "The Black Glove" storyline from Batman).

For the latter, Bermejo has the Cratchit character re-tell A Christmas Carol quite badly to Tim, updating it to modern times. This narrative, told all in prose that appears in big white text over the artwork, isn’t the Batman story, Bermejo just lines them up with one another. It’s really quite poorly told, as it’s essentially what you would get if you asked a random person on the street to summarize A Christmas Carol for you, but to set it in the 20th century instead of the 19th. And I’m confused as to why it’s even included. They already removed all reference to Dickens’ story from the title, why keep a retelling of it? With it removed, the book becomes a super-subtle adaptation—one that works remarkably well, given the care with which Bermejo chose his ghosts and the sources of the visions they give his protagonist—and it becomes somewhat more readable.

But it still has problems. My favorite part happens right after Batman jumps on the Cratchit character and screams at him for a few pages, spit literally flying out of Batman's mouth and onto the terrified bagman's. Batman tells him he's going to let him go rather than bust him, since he'll make better Joker bait than "jail bait."

I don’t think we’re meant to laugh at Batman here, but surely a smart guy like him knows what “jail bait” actually is, right? It’s not someone who goes to jail. 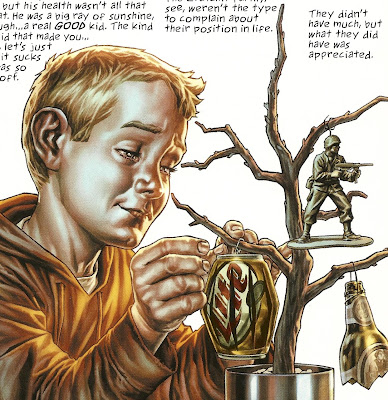 I would imagine the most common response to this book will be along the lines of Chris Mautner’s: Terrible story, nice art.

I found it more than a little undercooked myself. Bermejo’s style isn’t to my taste, as it’s quite representational—sometimes filmic, sometimes photo-realistic—and there’s a defensiveness about the costume designs that betrays a bit of embarrassment or shame on the part of the artist in embracing them (Robin, for example, has long pants, because shorts are just silly; he also had chain-mail in his costume. Batman is wears armor that makes the Arkham Asylum game Batman and Christian Bale’s Batman look vulnerable; and his mask looks like Midnighter’s). 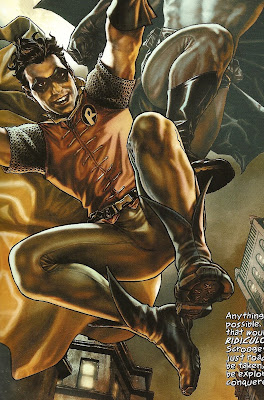 But at the end of the day, too much of it (with “any” being “too much”) is just plain hard to read. Look at this image, with Alfred in the background and foreground simultaneously. 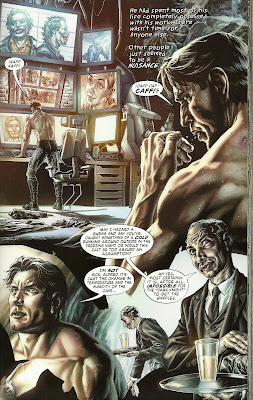 Does Batman have twin butlers, or does Alfred have super-speed in the Noel-iverse?

That said, the costume designing was my favorite part of the book. I liked seeing how Bermejo thought through various aspects of various costumes, coming up with unique tastes that seemed like compromises between the original comic designs and what Hollywood costume designers would outfit the characters with in potential live-action films. 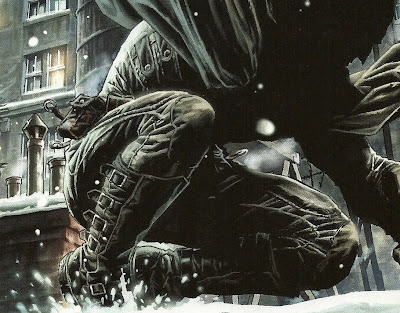 It’s all little stuff, but I like seeing where Bermejo put the buckles, or how his Catwoman’s boots might differ from other Catwoman boots. 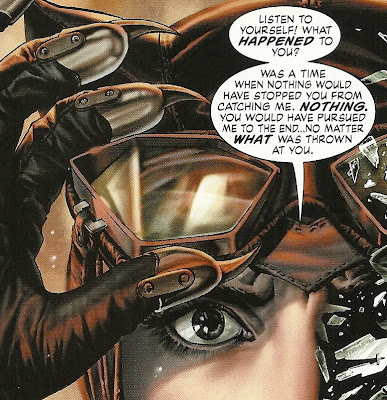 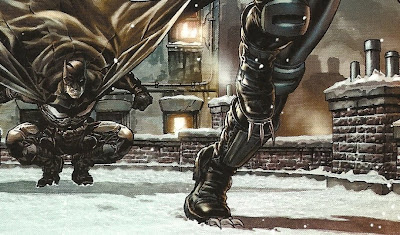 I could find no such silver lining in the writing, however. It was just too hard to believe, from Batman being so amoral as to dangle people in front of The Joker in order to catch him, to Batman being so plain stupid about the way in which he does so (he uses the Cratchits as bait for The Joker, but then goes home to the Batcave and undresses, watching them on his Bat-computer, God knows how many miles away, while he has no idea where The Joker is), to Superman flying in to check on Batman, and not offering to help find The Joker with the amazing powers he has, or to stand guard over the kid Batman was using as bait (remember, Batman's plan is to wait for The Joker to show up to kill Bob and Tim in order to catch him).

Check out this page: 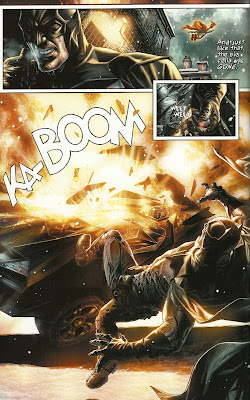 Superman doesn't even look over his shoulder when the Batmobile explodes in Batman’s face (“I heard you coughing all the way from Metropolis,” Superman says when he first appears, reminding us that he has super-hearing).

And Bermejo and co-publisher Jim Lee, who writes an introduction (Oh, there’s a silver lining! There’s an introduction! I think all graphic novels of this sort should have one), are just daring people to take issue with it.

First, Lee writes that Bermejo is one of those few lucky talents whose work (Joker) is both popular and well-reviewed.

And here’s how Bermejo starts the story: 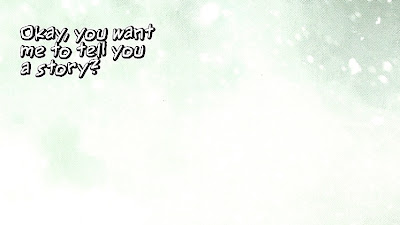 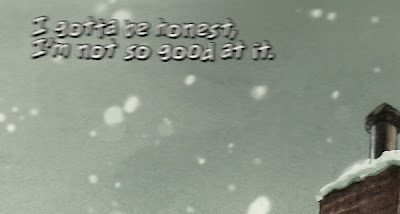 No, no you’re not. But you don't have to be that honest about it.

Nice costume designs and buildings, though. This would be a pretty strong second draft, but it still needs a lot of work.
Posted by Caleb at 6:59 PM

I enjoyed the hell out of Noel book. It rocks!

Who are you anyway?

This was a fantastic piece, artistic to every letter. You can only hope that one day you'll produce something half as good as one page of this book.

I, too, did not like how Batman was written. He would never use a kid as bait, I almost wanted to stop reading when I got to that point. Batman has one very strong principle, he does not kill. And for all intents and purposes, he would have been guilty if the Joker found the boy while Bruce was monitoring on and off from afar in the Batcave. The boy was just as innocent as a young Bruce who watched his parents murdered, what was the author thinking? Batman wouldn't do that in a million years, get real!