Maybe it's all the "CLASSIFIED" books, and maybe it's simply that reading fewer and fewer of Marvel's monthlies as more and more of them reach the $3.99 price point pushes me more and more out of the loop, as it were, but there didn't seem to be a whole heck of a lot that was that exciting in their solicitations for July of this year (which you can see in their entirety here).

Well, except, of course, for this: 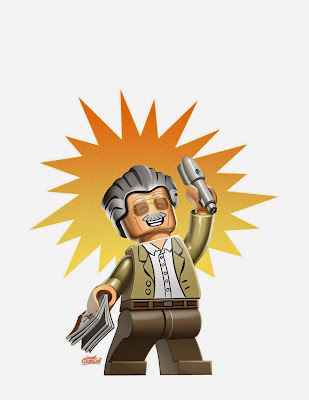 Other than Lego Stan Lee variant covers though, here's what jumped out at me this time around... 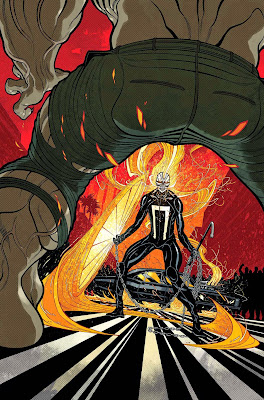 Reminder: Tradd Moore is a good artist. That big, hulking figure in the foreground of this cover for All-New Ghost Rider is not, in fact, The Hulk, but rather "a modified MRyt. HYDE," so don't too excited: This is not the first chapter of "The All-New Defenders/All-New Champions War" or anything that awesome. 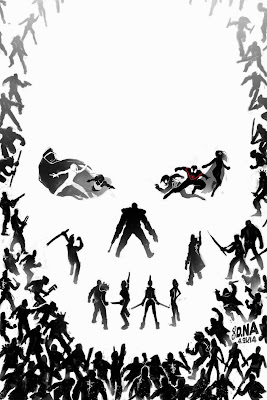 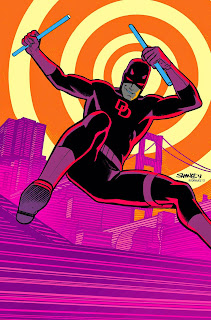 DAREDEVIL #0.1
Mark Waid (W) • Peter Krause (A)
COVER BY Chris Samnee
For the first time in print, the story that bridges the gap between the last Daredevil series and the all-new ongoing!
• A cross country flight pits The Man Without Fear against a man without a heartbeat!
• Plus, TWO DAREDEVILS (for the price of one)!
• Mark Waid (Daredevil, Insufferable) and Peter Krause (Insufferable) bring you the first leg in Daredevil’s journey to a new life!
48 PGS./One Shot/Rated T+ …$4.99

I like how, when revealing past projects Mark Waid has written in parentheses, they choose two of his dozens of credits, and one of them is this comic, which anyone reading this is probably already aware that he's writing, since he's credited as the writer and all... 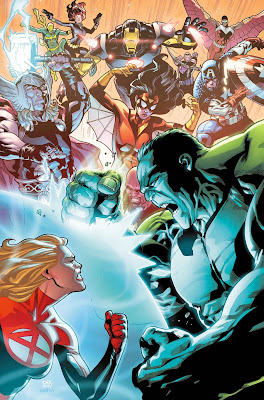 Ohhhhhhh... That's Sue "Invisible Woman" Storm on the cover of this issue of Fantastic Four. From afar—i.e. before I clicked on the image—I thought that was Carol "Captain Marvel" Danvers. 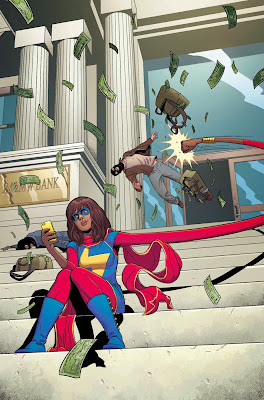 That's a great cover by Jamie McKelvie, but I can't help but notice that "Jacob Wyatt" is a different name than "Adrian Alphona"...has Marvel already over-shipped this book to the point that the original artist, and strongest selling point, can't keep involved with each and every issue? That's unfortunate.

Also, this may seem like a really ignorant question, but why does the new Ms. Marvel have the codename and costume of another character, but a seemingly different power set?


NEW WARRIORS VOL. 1: THE KIDS ARE ALL FIGHT TPB
Written by CHRISTOPHER YOST
Penciled by MARCUS TO & NICK ROCHE
Cover by RAMON PEREZ
Warriors reborn! Speedball and Justice gather a group of young heroes including Sun Girl, Hummingbird, the new Nova and a couple of fresh faces to stop the latest threat to the Marvel Universe! Atlanteans, Inhumans, Morlocks, clones and hundreds of other so-called “superior” beings are living among normal humans — but not everyone is pleased about that. The High Evolutionary has raised an army to combat the evolution of humanity — and the New Warriors are locked in his deadly sights! If it’s not human, it dies — but why? And what do the mighty Evolutionaries want with Nova? As worldwide genocide approaches and Nova encounters the captive Scarlet Spider, the Second Evolutionary War begins! Can the Warriors stop worldwide genocide? Should they? How many lives would you sacrifice to save all of humanity? Guest-starring the Avengers! Collecting NEW WARRIORS (2014) #1-6.
136 PGS./Rated T+ …$17.99
ISBN: 978-0-7851-5453-2

That's a pretty funny title. Um, that's all I have to say about this.


REVENGE: THE SECRET ORIGIN OF EMILY THORNE PREMIERE HC
Written by ERICA SCHULTZ
Plot by TED SULLIVAN
Art by VINCENZO BALZANO
Cover by DUSTIN NGUYEN
A new graphic novel inspired by ABC’s popular television series REVENGE, co-written by series writer Ted Sullivan! Emily Thorne is a wealthy and good-natured philanthropist who recently befriended the powerful Grayson family. But Emily’s real name is Amanda Clarke. Twenty years ago, the Graysons’ elite social circle framed Amanda’s father for a horrific crime — and Amanda plans to destroy the lives of those who stole her childhood and betrayed her father. Now, experience Amanda’s first mission of revenge! After training in Japan, the untested heroine finds herself infiltrating high society in Geneva. There, she uncovers secrets about her past — but her future will be short-lived unless Amanda can defeat a surprising enemy with ties to the people who destroyed her life! Prepare for a thrilling ride into the previously unexplored past of television’s most dynamic — and dangerous — girl next door!
112 PGS./Rated T+ …$24.99
ISBN: 978-0-7851-9039-4
Trim size: standard
© 2014 ABC Studios

Marvel is apparently expanding its relationship with parent company Disney's TV channel, ABC, beyond those awful-looking Castle-related tie-ins (And I love Castle, the TV show).

Sooooo, when are they gonna do a Dancing With The Stars graphic novel, in which "stars" from the Marvel Universe (Dazzler, Patsy Walker, Tony Stark, Mary Jane Watson, umm...) compete with the real pro dancers from DWTS...? Because I think that just replaced Caleb-written Godzilla/DC Universe and Transformers/Justice League crossovers on my fantasy list of crossovers. 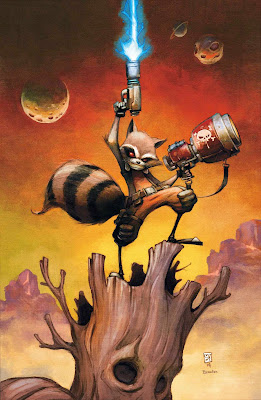 ROCKET RACCOON #1
SKOTTIE YOUNG (W) • SKOTTIE YOUNG (A/C)
...
As defenders of the cosmos go, Rocket Raccoon has faced his fair share of galactic battles. He’s been a hero to the weak, a champion of good, a protector of the innocent, a heartthrob to the many intergalactic female species and now--a raccoon on the run?! ( I’m sorry, I’m sorry, a “formidable-and-expert-Guardian” on the run. Rocket is NOT a raccoon, okay?) Rocket’s high-flying life of adventure and heroism may soon be a thing of the past when he becomes a wanted man—and the authorities are not the only one on his TAIL! (We’ll definitely be overusing that pun!)
Superstar creator Skottie Young brings his A-game as writer and artist on the series we’ve been waiting decades for. Because let’s be real, this is the only Guardian of the Galaxy you actually care about. Am I right?
32 PGS./Rated T …$3.99

I've actually wondered before why they didn't just cancel Guardians and replace it with a Rocket Racoon monthly, co-starring Groot. This seems like a pretty good marriage of creator and character and I'll look forward to checking...Oh, another $4 book. Well, I'll look forward in checking the trade out from a library in late 2014/early 2015, I guess. 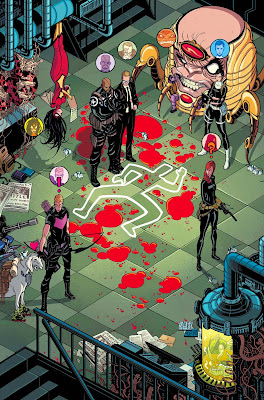 SECRET AVENGERS #5 & 6
ALES KOT (W)
MICHAEL WALSH (A)
CoverS by TRADD MOORE
Issue 5 - “THE DROP”
• Death on the Helicarrier. The killer is at large. Hill leads the investigation.
• Another incident on board. No-one expects a proper acid bath.
• Coulson goes rogue. Hawkeye wonders. Spider-Woman talks with a new friend.
Issue 6 - “ACT TWO/THE SPEEDING REIGN OF COLLAPSE”
• Black Widow, Spider-Woman and Hawkeye go after Lady Bullseye and Artaud Derrida.
• What does S.H.I.E.L.D. want with the Fury? M.O.D.O.K. will show you!
• Coulson’s investigation takes him to Peru.
32 PGS. (EACH)/Rated T+ …$3.99 (EACH)

I've probably mentioned this three or four times before, but I really wish that cover artist Tradd Moore were providing interior art as well, as the covers for this series, the 18th or so incarnation of the Secret Avengers title, are awesome. 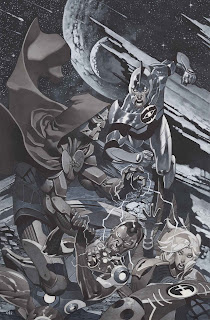 ULTIMATE FF #4 & 5
JOSHUA HALE FIALKOV (W) ANDRÉ ARAÚJO (A)
Cover by CHRIS STEVENS
SUE STORM. IRON MAN. FALCON. TOGETHER WITH XXXXXXXX
MAKE THE STRANGEST TEAM OF ALL!
• Trapped outside the Universe, an old friend returns to help.
• The Secret Origin of XXXXXXXXX REVEALED!
• Something unimaginable comes through the rift.
32 PGS. (EACH)/Rated T+ …$3.99 (EACH)

I don't know who "XXXXXXXXX" is, but he or she must be three times as x-treme as either Vin Diesel or Ice Cube.
Posted by Caleb at 6:00 PM

"but why does the new Ms. Marvel have the codename and costume of another character, but a seemingly different power set? "

Do you actually not know the answer to this? Because if that's true, that would mean you're not reading Ms. Marvel. And you really should be.

Short answer is that Kamala Khan idolized the original Ms. Marvel, then received superpowers.
The fact that these superpowers were nothing like Carol Danvers' powers has done nothing to dissuade Kamala from using the Ms. Marvel name.

Realistically she should probably go by "Elasti-Girl" but I don't know if Doom Patrol comics even exist on Earth-616.

I know I may be a minority in saying this, and this is coming from someone who adores Alphona's art on the title, but I'm pretty okay with the artist change on Ms. Marvel.

Having someone else draw the character will make it seem less like she's married to the artist and style, and while I acknowledge Alphona's a selling point Wilson's writing should be able to carry the title as well. All that being said, Wyatt's also a fantastic artist and a great fit.

That's actually a refreshingly different take on the legacy character concept though...