This cover could use some work. 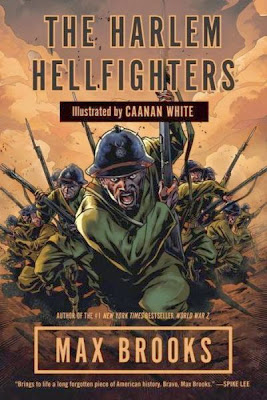 This graphic novel has been getting a good deal of mainstream attention lately, thanks to its little-known historical subject matter, the Hollywood attention it has already garnered and, of course, that it's written by Max Brooks, one of the most successful prose-about-zombies writers (whose World War Z was also made into a movie).

I don't really care for the cover though. Not the image; that's fine. It's the way it breaks up the creative team for maximum confusion. If it really is a graphic novel—and I assume it is, although I haven't seen it yet—it's not really "illustrated" by anyone. The artist, Caanan White, is just as much the creator and author as the guy who wrote the script, whether or not the book was a passion project conceived and pursued by the writer and the artist came in once the script—maybe even an extrenely full, Alan Moore-style script—was completed as a sort of work-for-hire type of thing.

Comics, and graphic novels, are, by definition, words and pictures, and the pictures are every bit as important, if not more so, than the words (If they did it right, somewhere between 90 and 99-percent of every page of this book should consist of space filled by White's drawings, not Brooks' words).

I don't understand why White is credited as an illustrator here then, as illustrating is a very, very different thing than drawing a comic, as anyone in the business of publishing books knows.

Actually, I don't really understand why the cover credits either man as it does, as at first glance it looks like White is the sole creator, since there's a "by" by his name, and then you look around for another nanosecond and see Brooks' name there, but sans a "by" or any sort of credit. It looks like a wily designer left it there simply to trip the charging figure on the cover.

I mean, I get that Brooks is the big reason this book has been published, and is one of the main selling points the publisher is using as a hook or angle to market the book, but regardless of who gets top-billing or bigger font-size, this particular formulation of who did what is extremely peculiar, as White technically gets top billing (on the cover itself, anyway; not sure what the spine and title page look like) and is assigned a particular function, even if its an inaccurate description of what he contributed, while Brooks' name just hangs at there at the bottom, with no function assigned to him.

Even James Patterson novels, of which a new one is released on a fortnightly basis, and celebrity-"authored" books mostly written by someone other than the celebrity are a little more accurate in their crediting of who did what, using a "with" and a smaller font for the name of the writer who is not James Patterson or the celebrity. Those at least make clear that both parties contributed to the authorship, regardless of who is emphasized as the major draw.
Posted by Caleb at 9:05 PM

That cover is a spectacularly poor design. But I'm not particularly a fan of White's art, either. It's overdrawn & inconsistent in that particularly Image-esque novice way that DC's worst books are. The story deserved an accomplished illustrator. Not that I was expecting Ho Che Anderson but there are worse aspirations when picking an artist for a historical...

Sadpanda all over this one.